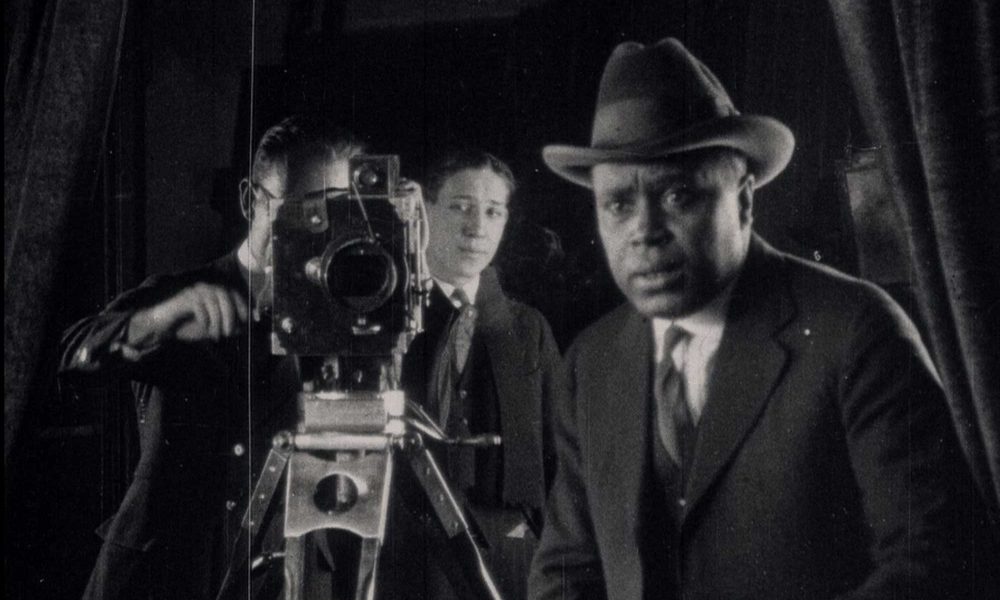 Independent director/producer Oscar Micheaux, the most successful and prolific black filmmaker of his day, directly confronted race and racism in such movies as Within Our Gates (1920), which took up the cause of education while broaching such taboo subjects as miscegenation and lynching, The Symbol of the Unconquered (1920), his response to Birth of a Nation, and Birthright (1938). The set includes nine features and a short from Micheaux, including his most famous film Body and Soul (1925) starring Paul Robeson playing brothers (one good and the other a con man in a priest’s collar) in his film debut.

There are two features and a short by actor/director Spencer Williams, including his hugely successful directorial debut The Blood of Jesus (1941), an allegorical drama of a woman’s spiritual odyssey after death: an angel directs her to heaven but at the crossroads the devil tries to tempt her to Hell (a city of nightclubs, gambling rooms, and fast-living folks at night, of course). The Blood of Jesus was shot for pittance (something like $6,000) and it’s a scruffy production in a lot of ways, but it’s also inventive and impassioned. Williams plays the grieving husband of the dead woman whose repentance for his non-religious ways gives her a second chance. Also from Williams is Dirty Gertie from Harlem USA (1946), an unauthorized adaptation of W. Somerset Maugham’s short story “Miss Thompson” relocated to the Caribbean. It was one of Williams’ final films as a director and stars Francine Everett (her last name is misspelled as Everette in the credits), a singer, dancer, and actress who turned her back on the stereotypical roles offered by Hollywood. Dirty Gertie gave her the chance to play a glamorous, sexy black woman never seen in Hollywood pictures. Williams himself takes on a small but memorable role: the “voodoo woman” Old Hager, who sees no good in Gertie’s future. In some ways he anticipates Tyler Perry, playing the voice of fate in drag, but with his visible mustache and a husky voice, Williams barely bothers with the pretense of playing a wizened old woman. The weirdness of the scene, however, adds to the tension as a black cat and a broken mirror bring out Gertie’s superstitions.

Williams also co-stars in The Bronze Buckaroo (1939), a black western starring longtime Duke Ellington singer Herb Jeffries as a singing cowboy hero on the range. He has a charisma and confidence that should have made him a screen star outside of the race film circuit had Hollywood treated black actors, black stories, and the black experience with any respect. Williams, meanwhile, went on to play Andrew H. Brown, aka Andy, on the TV incarnation of the long running comedy Amos ‘n’ Andy. It gave him the biggest audience he ever had but his career was much richer than that single role, as these films show.

Those films are relatively well known among those with a passion for film history. They are landmarks and success stories in a film culture that was largely unknown outside the black community for years—Within Our Gates and The Blood of Jesus were both added to the National Film Registry—and have been available (though often in inferior editions) on disc and VHS before that. These editions are not pristine, mind you, because these films were not considered worthy of preservation until decades after their respective releases, but they’ve been mastered from the best available elements from archives across the country and look better than previous releases, and the silent films all feature musical scores, most of them newly composed and recorded for this release.

There are also some fascinating discoveries, all of them new to me and surely to many other interested viewers.

The earliest films are a trio of slapstick comedy shorts featuring all-black casts produced for both black and white audiences by Luther Pollard for the Chicago-based Ebony Film Corporation. In Pollard’s own words (written in a business letter to a West Coast distributor), he intended to show that “colored players can put over good comedy without any of that crap-shooting, chicken-stealing, razor-dealing, watermelon-eating stuff that the colored people generally have been a little disgusted seeing.” Two Knights of Vaudeville (1918), a show business spoof featuring two buddies (Jimmy Marshall and Frank Montgomery) who put on their own stage show, plays on some of the stereotypes that Pollard wanted to get away from—the intertitles are filled with mangled grammar and the hand-drawn signs and bills for their neighborhood show are rife with the misspellings and backwards letters—but if these guys are buffoons, their neighborhood audience knows it all too well and arrives prepared. Mercy, the Mummy Mumbled (1918) pokes fun at both mad scientists and the Egyptian mummy craze that followed the discovery of King Tut’s tomb early in the 20th century. Director R.G. Phillips manages the many moving parts of this busy comedy quite deftly, and offers perhaps the last glimpse audiences will see of an African-American scientist on the screen for decades.

Non-fiction is represented by Zora Neale Hurston’s landmark ethnographic films chronicling life in rural African-American communities. In addition to being a celebrated author (Their Eyes Were Watching God), playwright, and poet, Hurston was a pioneering anthropologist who documented life in black communities in the American South and Caribbean diaspora and this set includes two excerpts of her work: Zora Neale Hurston Fieldwork Footage from 1928 (about 3 minutes) and Commandment Keeper Church, Beaufort South Carolina, May 1940 (1940), a 15-minute excerpt of field recording footage that observes religious services (including communal singing and revival-style sermons) in the Gullah community of the Sea Islands of South Carolina. Norman Chalfin made field audio recordings of the Beaufort footage which accompanies the footage. It’s not synchronized but these authentic recordings of the distinctive musical and vocal culture of the Gullah people adds to the texture and atmosphere of the events photographed.

The Flying Ace (1926) is an aviation melodrama with a black pilot hero that was shot so cheaply it couldn’t afford any actual flying scenes; apart from a few shots of a prop plane taxing on a grass runway, the flight scenes are suggested with characters in prop planes against an unmoving white wall (the white patch is a dead giveaway) while wind machines blow. It demands a certain suspension of disbelief but it pays off nicely. Not in the plot, a mystery with a convoluted plot and a tiresome resolution, or even necessarily the stalwart leading man, but in his sidekick Peg (Steve Reynolds), a one-legged mechanic who uses his crutch as a comic prop as much as a tool. He uses it to pump a bicycle in a chase sequence, and then mounts it on the handlebars to reveal a hidden rifle! The film was produced by the Florida-based Norman Studios and, though director/producer Richard E. Norman was white, the cast is entirely African-American its portrayal of a black aviator was an inspiration to audiences who wouldn’t see another black flier on the screen for decades.

The films of James and Eloyce Gist are a different kind of revelation. They were not professional filmmakers but traveling evangelists who made films to accompany their sermons. These allegorical dramas were made without professional equipment or studio facilities, using non-professional actors and shooting 16mm film without sound. Historical information on their work is scarce but the filmmakers appears to have been a genuine creative partnership with Eloyce, a successful entrepreneur who married the Christian evangelist James in the late 1920s, intimately involved in writing, directing, and producing beginning with Hell-Bound Train (circa 1930), a short feature that tackled the issue of temperance in an allegorical narrative. Their follow-up, the short film Verdict: Not Guilty (circa 1933), presents the heavenly trial of a woman who has died giving childbirth out of wedlock as a religious allegory by was of a church pageant. It is full of religious imagery and evocative folkloric elements with flashbacks to the woman’s life that provide a realism in sharp contrast to the allegorical pageantry. The texture, the pageantry, and the allegorical and ritualistic elements of both films look forward to the American Underground cinema of Kenneth Anger, Curtis Harrington, and others in the 1950s and 1960s.

Both of these films were reconstructed from fragments; the films of James and Eloyce Gist were one-of-a-kind, personally carried by the filmmakers to churches and community centers and screened on portable 16mm projectors, and had fallen apart when they were donated to the Library of Congress after the death of Eloyce in 1974. And a third, uncompleted film, Heaven-Bound Travelers (circa 1935), was discovered among the rolls of film in the Gist collection at the Library of Congress. It is an even more ambitious production. Eloyce Gist takes a central role onscreen as a wife and mother who is wrongfully accused of adultery by her husband and is left to fend for herself and their daughter in the world. As she struggles to sustain them, the husband becomes riddled with guilt and struggles with his decision, and the social realism of the drama shifts to an allegorical struggle between the devil, appearing to tempt humanity to sin, and the angels.

All films mastered from the best available elements preserved at The Library of Congress, George Eastman Museum, Museum of Modern Art, UCLA Film and Television Archive, and other archives. Preservation came late to these films, which were independently produced (and in some cases self-financed) and essentially orphaned after their theatrical runs. Some of the feature films have been available on cheap home video editions, almost all of them indifferently transferred from whatever source materials they could access. Some of those discs are so blurry and hissy it’s hard to make out the film underneath the noise.

While these films have undergone no extensive restoration, they have been professionally mastered from the best existing materials, which mean that damage and wear is visible but there is clarity to the image (many of the films look quite crisp) and the soundtrack. Do not expect pristine presentations. The films in this collection (at least the features and theatrical shorts) show the evidence of their respective tours of duty through the (mostly southern) “race films” circuit.

DVD and Blu-ray editions (the Blu-ray set includes four exclusive shorts) with an accompanying booklet with essays, credits, and notes on the films.