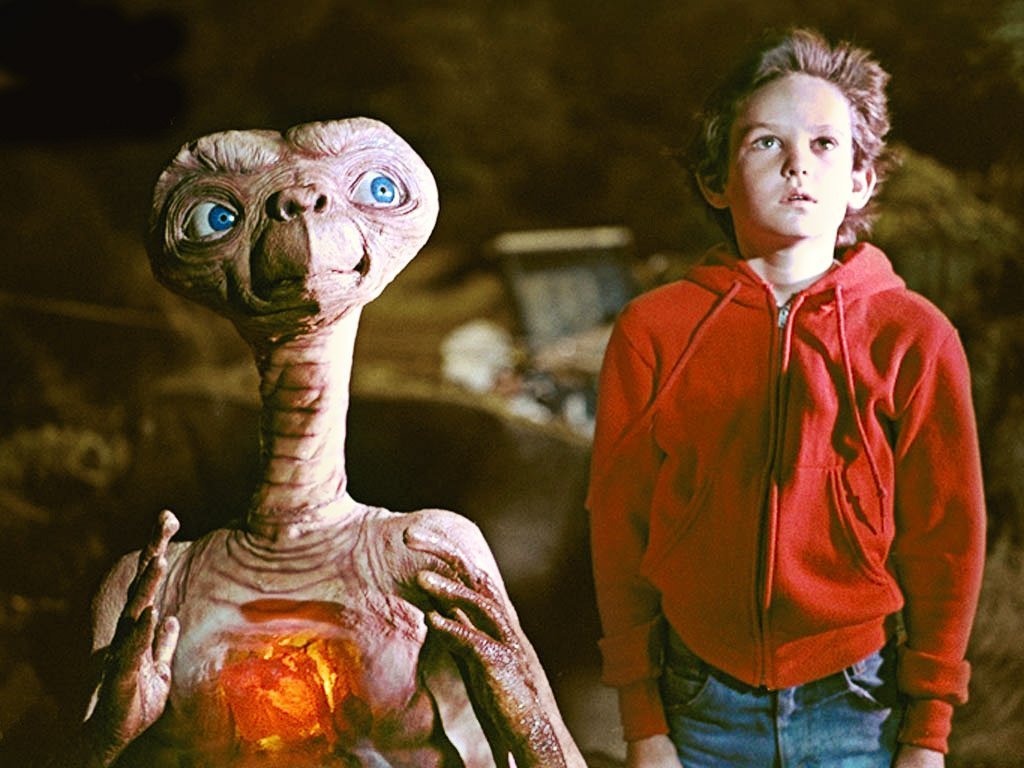 Henry Thomas is Elliot, an emotionally bruised kid suffering under his parents’ separation who finds and bonds with another lonely, lost soul, a benevolent alien left behind when his spaceship leaves. “I’m keeping him,” says Elliot, but meanwhile an army of government men search for him. As E.T. grows homesick and just plain sick. Elliot and friends need to help get E.T. home.

It’s a fantastical adventure with a grounding in the modern suburbia of divorce and adolescent anxiety, and E.T. is the ultimate imaginary playmate come to life. Part pet, part best friend, part guardian angel with an emotionally symbiotic connection to Elliot, this funny looking stranger in a strange land (think of a squat, mutant teddy bear with lizard skin and monkey fingers and voice between a growl and a purr) is a wizened old grandfatherly being with the trust and playfulness of a child.

Steven Spielberg is a technical wizard without a doubt and he seamlessly brings actors and effects together, but none of the special effects have the charge of Henry Thomas laughing in joy as his bicycle takes flight over the forest and across the full moon. That image has since become the corporate logo for Amblin Entertainment and it’s a little tainted for it, but the excited, spontaneous shouts of pleasure are as genuine as ever.

That’s because Spielberg is America’s most perceptive chronicler of suburban life and an astounding director of child performers. E.T. comes to life in the awe and emotion of his adolescent cast, not just Henry Thomas but older brother Robert Naughton and adorable little Drew Barrymore as his guileless little sister. We believe in E.T. because they do. Seen in the wake of his more ambitious work of late, E.T. comes across today as Spielberg’s last blast of emotional, instinctual innocence and naiveté, and it’s genuinely charming and refreshing. It is still a joy to see the world through the eyes of a child.

Dee Wallace-Stone co-stars as the fragile mother weathering separation and Peter Coyote is the government agent with the dream of a child.

Just as the earlier 30th Anniversary release, this edition has been remastered from the original 35mm elements, without the “enhancements” done for the 20th Anniversary edition (the digital tweaking of E.T.’s facial expressions, the erased guns of the government men). Unlike his pal George Lucas, Spielberg has chosen to honor the original film, with all the technical compromises intact, while making it look and sound as good as it ever has. But for the curious, he includes two deleted scenes that he added back for the 2002 version in the extras.

The rest of the supplements—three hours of extras—are carried over from the previous release and included in the Blu-ray, two-disc DVD, and 4K Ultra HD editions (for the 4K Ultra HD releases, the extras are all on the accompanying Blu-ray disc).

Spielberg reflects on the origins, inspiration, and personal influences of the film in the 12-minute interview featurette “Steven Spielberg and E.T.” The two-part, 53-minute “The E.T. Journals” is a journey through the making of the film, created entirely from archival footage shot on the set, both watching the filmmakers and performers at work and interviewing them between takes, organized by the narrative of the film rather than the shooting schedule and concluding with John Williams scoring the film (wait for the temp effect of Elliot and E.T. flying through the forest on the reference print – it’s priceless!). Both are produced by longtime Spielberg chronicler Laurent Bouzereau. From the 20th Anniversary edition comes the 50-minute documentary featurette “The Evolution and Creation of E.T.” (from script to shooting), “The E.T. Reunion” (Steven Spielberg reminisces with cast and crew members), “The Music of E.T.: A Discussion with John Williams” and “The 20th Anniversary Premiere” (both about the preparation, rehearsal and live performance of the score in 2002), and the galleries of stills, productions art and designs, and posters and marketing.

The deluxe E.T. The Extra-Terrestrial 35th Anniversary Limited Edition presents the newly-remastered 4K Ultra HD and the Blu-ray in slipsleeve with an illustrated booklet featuring notes in the film and filmmakers, stills, production art, and behind-the-scenes photos and a CD soundtrack featuring selections from John Williams’ Oscar-winning score.

The 4K Ultra HD releases include a bonus Blu-ray (which includes all the supplements). The Blu-ray features a bonus DVD. All released include a bonus UltraViolet digital HD copy of the film.
E.T. The Extra-Terrestrial 35th Anniversary Limited Edition [4K Ultra HD + Blu-ray]