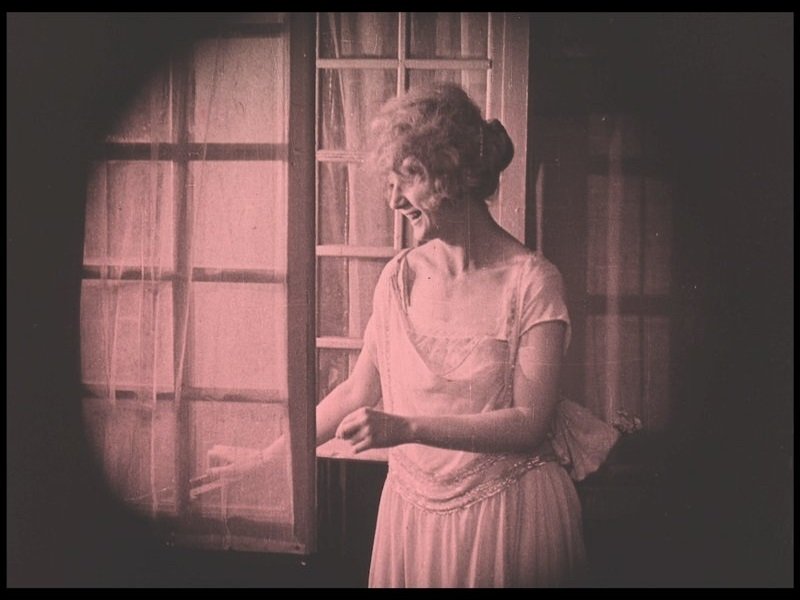 A year after Kino’s superb Pioneers of African-American Cinema, Flicker Alley’s Early Women Filmmakers collects and curates the work of women filmmakers in the U.S. and Europe before World War II.

Women ironically had more opportunities in the early years of filmmaking, not just as directors but as writers, editors, and producers, than they did after the coming of sound. Alice Guy- Blaché directed one of the first narrative films ever produced, telling a story rather than simply staging a scene, and become the very first studio head—not just female studio head, but first ever—when she took charge of Gaumont in 1896. Anita Loos was perhaps the greatest writer of pithy, witty intertitles in the silent era, an art form that is still not given it due, and Frances Marion one of the most successful and powerful screenwriters of the silent era. June Mathis was so successful a writer of epics and dramas that she had power over casting and production and shaped Rudolph Valentino into the biggest romantic screen superstar of his era.

Flicker Alley’s set, produced by silent film preservation godfather David Shepard (who passed away earlier this year), presents the films of 14 women directors made between 1902 and 1943. The collection of shorts and features includes fantasies, dramas, comedies, animation, and avant-garde films from some of the most important filmmakers of the silent era as well as less known women filmmakers.

The six short films by Alice Guy-Blaché show her evolution from an inventive fantasist of early cinema to a sophisticated storyteller who used dramatic compositions and editing to tell complex stories. Lois Weber’s short thriller Suspense (1913) shows an even greater technical and narrative sophistication, from a three-way split screen to extreme angles to dense crosscutting. Germaine Dulac’s La Souriante Mme. Beudet (1922), considered to be the first feminist film, brings avant-garde elements to melodrama and Maya Deren’s Meshes of the Afternoon (1943) is an avant-garde landmark.

It’s startling how little regarded Lois Weber is in most silent films histories, and how poorly represented she is on home video. She was one of the most prolific filmmakers of the silent era and one of the most inventive and dramatically innovative, all while working for the nascent Hollywood studios. An entire set could be dedicated to her work (and frankly should be). Along with the short Suspense mentioned above, this set includes her 1921 feature The Blot, a compelling drama that confronts both the physical and emotional damage of poverty in a situation that has become all too timely again. The blot is upon the family of a respected college professor struggling to get by on an impoverished salary even though he teaches students from rich families, and in some cases is expected to babysit them as they indulge in juvenile antics (that’s a dashing Louis Calhern as one of the students whose conscience is spurred over the course of the film). One of Lois Weber’s great films (not included in this collection) was Shoes (1916), which confronted the issue of working class poverty, and Weber again uses shoes as a defining motif of hardshipand depravation, but she also brings a powerful compassion to the story. Unlike so many Griffith social melodramas, where the greedy and the criminal are the cause of hardship, Weber allows all her characters the opportunity to learn and change. It’s the system and the confused values of our culture that’s at fault here and she’s holding it accountable.

Along with restored editions of these relatively well known films, the set spotlights a number of interesting but underseen films: Madeline Brandeis’s storybook fantasy The Star Prince (1918) with an all-child cast, Dulac’s domestic drama La Cigarette (1919), Russian director Olga Preobrazhenskaia’s The Peasant Woman of Ryana (1927), and the independently-produced The Woman Condemned (1934) from Dorothy Davenport, who signed her films Mrs. Wallace Reid in tribute to her late husband. And the range of filmmaking encompasses the comedy short Mabel’s Strange Predicament (1914), directed by comedy star Mabel Normand and featuring Charles Chaplin in one of his earliest roles, the short films of animation pioneer Lotte Reiniger, and the propaganda documentary short Day of Freedom (1935) by Leni Riefenstahl.

While hardly comprehensive, it is an ambitious collection of important films, many previously unavailable and most of them newly restored and remastered for this release, that celebrates the achievements of women filmmakers in film history. The box set presents the entire program on three Blu-rays and three DVDs, each in a separate case, providing two separate formats of the production.
Early Women Filmmakers: An International Anthology (Blu-ray/DVD Dual-Format Edition)