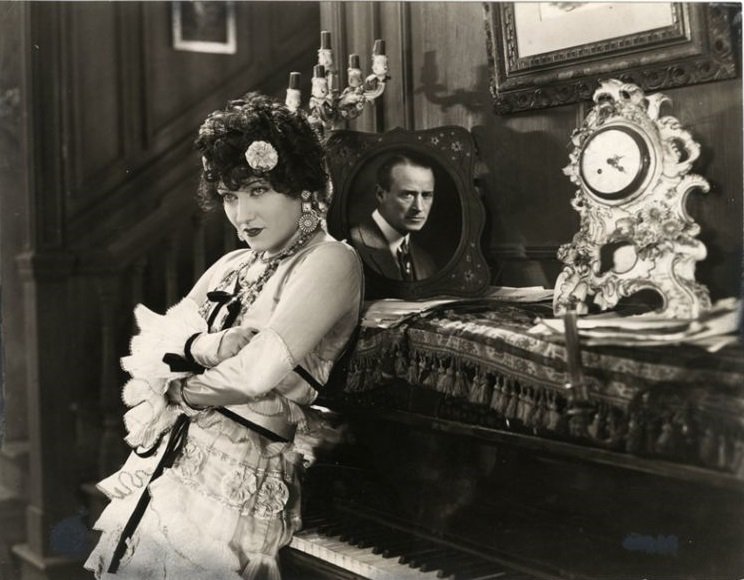 Gloria Swanson plays the music hall star Zaza (1923), Allan Dwan’s spirited silent film adaptation of the 19th century play by Pierre Berton and Charles Simon. This is “the Zaza of today,” reads the introduction, a 20th century version with Swanson as the temperamental star attraction of the top music hall in a provincial French town who dreams of performing in Paris. She competes with rival actress Florianne (Mary Thurman) for the attentions of the aristocratic Bernard Dufresne (H.B. Warner, later to play Jesus Christ in King of Kings and Mr. Gower in It’s a Wonderful Life), who takes a table every night just to see Zaza’s appearance. Just as it looks like Zaza has won his heart, she discovers that he’s already married (to a social climber who has no affection for him) and has a daughter.

That’s clearly not the end of things in this lively but thinly-plotted trifle, which starts as a high-spirited, lavishly produced comedy and steers into romantic melodrama, but what keeps the film buoyant is not the story but the charm and spirit of Swanson and the lively direction by Allan Dwan, who was fresh off Robin Hood. He opens the film in a whorl of activity backstage, introducing most of the cast in a rapid succession of memorable entrances (notably her hard-drinking Aunt, who sees Zaza as her meal ticket). Dwan moves the film along at a terrific pace, fills it with glamor and spectacle, and brings out the best in Swanson, who dominates every scene by sheer star power. A partnership was born. Swanson named Dwan her favorite director and he went on to direct her in seven subsequent films. It’s a trifle but an enjoyable one that shows why Swanson was such a huge silent movie star.

You can see plenty of wear on the materials but otherwise it looks good—the clarity of the image shines through the scuffs and scratches. Silent with piano score adapted from the original cue sheets prepared for the film’s 1923 theatrical presentation performed by Jeff Rapsis.

On Blu-ray and DVD from Kino Classics, with commentary by film historian and Allan Dwan scholar Frederic Lombardi and a booklet with an essay by Imogen Sara Smith.

Pity the woman who stars opposite Rudolph Valentino, one of the most beautiful creatures ever captured on film. He was elevated out of supporting roles and into stardom in The Four Horsemen of the Apocalypse but it was The Sheik (1921) that solidified his place as the reigning heartthrob of Hollywood.

It’s a hoary but handsome desert melodrama with Valentino as a hot-blooded Arab Prince who was educated in Paris but gives in to his passions when he falls in lust with a lovely English Lady (Agnes Ayres) and carries her off to his desert tent for… well, whatever he could get away with onscreen in sexy silent cinema. The film, directed by George Melford, has it both ways as it plays on the western fantasies of exoticism and romanticizes sexual slavery, but presents the Sheik as something of a prankster who treats the whole thing as a joke and lets her go unmolested, only to have to rescue her from a less civilized desert chieftain (George Waggner). Adolph Menjou is the European friend of the Sheik who coaxes him back into western enlightenment and then plays matchmaker. Director Melford directed Valentino in one additional film but his career slipped over the years. He did, however, make another cult movie you may have heard of: the Spanish language version of Dracula that was shot at night on the same sets as the Lugosi classic.

It is accompanied by an organ score compiled and performed by Ben Model, a rousing piece in tune with the era.

Five years later Valentino returned for a sequel. In The Son of the Sheik (1926) he plays two roles: Ahmed, the beautiful young lion of the desert out for revenge on the dancing girl (Vilma Banky) he believes betrayed him, and his stern, bearded father (their scenes together are so smoothly tricked you might never notice), older and wiser and married to his lady love (Agnes Ayres, also reprising her role from the original film).

He and director George Fitzmaurice have fun with the whole project, creating an exotic fantasy of a desert romance and playing the generational collision of father and son for knowing humor: the kid really is a chip off the old block as mom reminds dad. Like much of the cinema of the silent era, the plot is secondary to the sheer elegance of the images, and Fitzmaurice polishes them up like a master jeweler. The defining moment of the film has the hero tied up and tortured by the sadistic villain: his chest bared, his face grimaced in pain, and the pug ugly henchman pinching him with glee. Valentino is the only actor of the silent era to receive the same soft visual caress as the actresses, and here he’s even treated to the spectacle of Victorian abasement saved for the feminine objects of sexual desire. This was the swoony star’s final film: he collapsed while in New York for the premiere and died 8 days later.

Accompanied by a lively new score by Alloy Orchestra

Both on Blu-ray and DVD from Kino Classics

The Sheik features historian Gaylyn Studlar and original Pathe newsreel footage of Valentino’s funeral, which captures a little of the public hysteria surrounding his funeral, plus an original trailer for Blood and Sand.

The Son of the Sheik features a filmed introduction by Orson Welles shot for a PBS showing in the early 1970s, the 8-minute vintage short “Valentino: His Life and Times,” an archival film excerpt featuring Valentino at the beach, a montage of newspaper headlines reporting Valentino’s illness and death, and an original trailer for The Young Rajah (1922).

The Son of the Sheik [Blu-ray]

The Son of the Sheik [DVD]