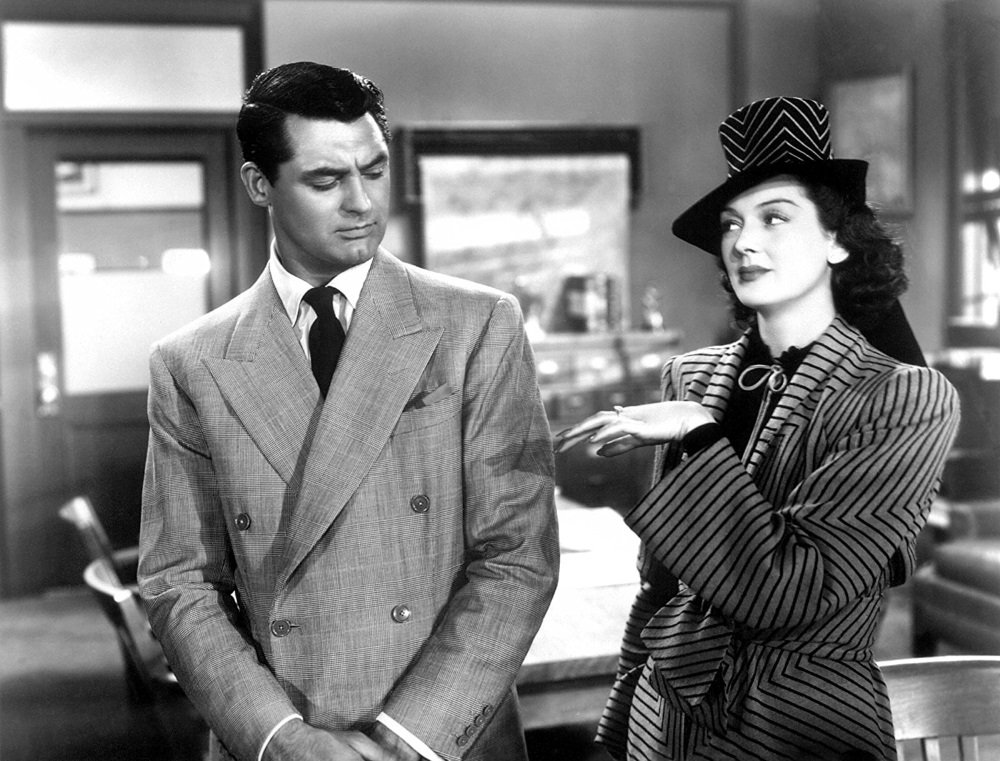 His Girl Friday (Criterion, Blu-ray, DVD) should really be listed as a double feature, for the “bonus” movie—a new edition of the original screen version of The Front Page, adapted from the snappy, cynical, double-barrel Broadway hit by Ben Hecht and Charles MacArthur—is not just a home video debut but a major discovery.

The Front Page (1931) stars Pat O’Brien as the crack reporter Hildy Johnson, ready to leave the beat for marriage and an office job, and Adolph Menjou as the crafty editor who pulls every trick to keep Hildy on the job to cover a breaking story: the execution of a convicted killer who is more addled everyman than rabble-rousing radical. The film opens on a test drop from the scaffold that is to hang Earl Williams, then the camera glides over to the reporter’s room where the thick-skinned gentlemen of the press prove that they are no gentlemen.

Is this the stuff of comedy? It is in the hands of Hecht and MacArthur, former newspapermen with plenty to say about the cutthroat tactics of journalists. These guys are equal parts con men who will do anything for a story, hard-boiled professionals jaded by the job, and public servants out to dig up the hidden dirt of corruption and crime (even if they have to commit a few themselves along the way). And they knew the dirty game of Chicago politics. Though the film never explicitly says so (the opening titles put this in “a mythical kingdom”), this is set in the cradle of Chicago politics, where everything is a matter of power and public appearances, including the impending execution of an unemployed working class joe turned anxious socialist (George E. Stone) who has been railroaded to placate the voters. When he escapes—using the Chief of Police’s own gun!—Hildy and Walter become conspirators until they can get their scoop and blow the lid off the mayor’s scheme.

Hecht and MacArthur didn’t write the screenplay but it’s a fairly faithful adaptation and director Lewis Milestone (who was fresh off an Oscar for All Quiet on the Western Front) drives the film with a rapid-fire pace that set the style of thirties screwball comedy. There were faster films to come but in 1931 this kind of rat-a-tat byplay was fresh and Milestone pushes the rapidly-evolving technology of sound recording and editing to create punchy montage sequences that hadn’t been since the silent era and sophisticated camerawork—dollies, whip-pans, and a 360 degree turn—that we tend to forget began early in the sound era.

This wasn’t Pat O’Brien’s first film but it was his first lead and his big Hollywood break, and it established the persona he played (or played off of) for decades to come: street smart, witty, clever, but also amiable and good-hearted. Adolph Menjou (a last minute replacement for the original actor, Louis Wolheim, who died just before shooting began) is pure calculation as Walter Burns, the manipulative editor who surely bleeds ink and is driven more out of competition and ego than dedication to the profession. Hildy’s bride-to-be (Mary Brian) is simply a competitor to Walter and he plies every dirty trick he can think of to stop their New York trip.

The Front Page was a Howard Hughes production, independent of the studios, which helped him push the boundaries but also left the film victim to a copyright lapse and it fell into the public domain decades ago. For years substandard prints of the film have been available on VHS and DVD. Just last year Kino Classics released an excellent edition on Blu-ray mastered from the 35mm elements preserved by the Library of Congress. But something interesting happened when archivists took a close look at the 35mm print from Howard Hughes’ private collection at the University of Nevada, Las Vegas. Scene-by-scene comparisons to the Library of Congress print showed a different version. Not an alternate cut, mind you—the cutting continuity was identical—but alternate takes for every shot, some with minor variations of dialogue. A little research determined that the Library of Congress print—the source for every PD edition on American home video—was in fact the export print of the film. The Howard Hughes print is the American edition of the film, made from the best takes and best performances as judged by Milestone and featuring the original dialogue (American references and vernacular were adjusted for foreign audiences). The differences appear minor individually but add up to a film that moves with a little more energy, dialogue with a bit more snap, camerawork that gets it just right. And that reference to Lady Godiva in the familiar version of the film? It’s Pocahontas here.

Barely a decade later Howard Hawks remade the film as His Girl Friday (1940), transforming the love-hate buddy comedy of dirty tricks into a delicious battle of the sexes by making Hildy (Rosalind Russell) not merely a woman but the editor’s (Cary Grant) ex-wife. The romantic rival is sweetly milquetoast insurance salesman Ralph Bellamy, a thoroughly decent guy whose slow-talking, trusting manner instantly sets him off from the scheming, cynical, savvy newsmen and urban hucksters whose minds are always racing for an angle

It is even faster than Milestone’s movie, a model of screwball pacing and rapid-fire delivery that never strains for effect, and Hawks is a master of staging. He continually manages to frame his criss-crossing banter and swirls of chaos within the same sustained shots, creating a dynamic where scenes can rev up from idle to over-the-speed-limit with minimal editing. It’s all in the delivery. And Hawks, operating under the constraints of the production code censors, slips in just as many sly suggestive asides as Milestone in his pre-code environment with just a little sleight-of-word delivery. But for me the singular Hawks addition to the fine screenplay, much rewritten for the Hildy and Walter dynamic but remarkably faithful in the newsroom banter, is Hildy’s capper to the scene where the newsman heckle Molly to the point to brutality. Hildy escorts the devastated Molly (Helen Mack) from the press room, which goes quiet after the door closes and the reporters sink into the only shame they feel in the entire film, and then reenters to deliver, softly like a velvet blade, the line: “Gentlemen of the press.”

The two-disc Criterion edition on Blu-ray and DVD features brand new high definition transfers of both films from excellent preservation elements. New to this release are the featurettes “Restoring The Front Page,” which recounts the discovery of the print, the research on its provenance, and its restoration, along with comparisons of scenes from the two cuts of the film (24 minutes); “Ben Hecht,” an interview with Ben Hecht historian David Brendel discussing Hecht, the culture of newspaper journalism of the 1920s, and the creation of the play, including the real-life inspirations for the fictional elements (26 mins); “Hawks on Hawks,” a featurette created from interviews with Hawks conducted by Peter Bogdanovich (audio only) and Richard Schickel (on film) (10 mins); and “Lighting Up with Hildy: 45 Years with His Girl Friday” featuring film historian David Bordwell on the film’s storytelling: as an exemplar of classical narrative filmmaking, as a classic Hawks film, and as a film that plays variations on classic tropes (25 mins). And critical observation aside, Bordwell offers a succinct appreciation of the film: “Every time I see it, I still laugh my ass off.”

Carried over from previous DVD releases: “On Assignment: His Girl Friday” with David Thomson and Molly Haskell from 2006 and the micro-featurettes “Howard Hawks: Reporter’s Notebook,” “Funny Pages,” and “Rosalind Russell: The Inside Scoop” from 1999.

The inserts—one for each film—are fold-out mini-newspapers with essays by Farran Smith Nehme (on His Girl Friday) and Michael Sragow (on The Front Page).