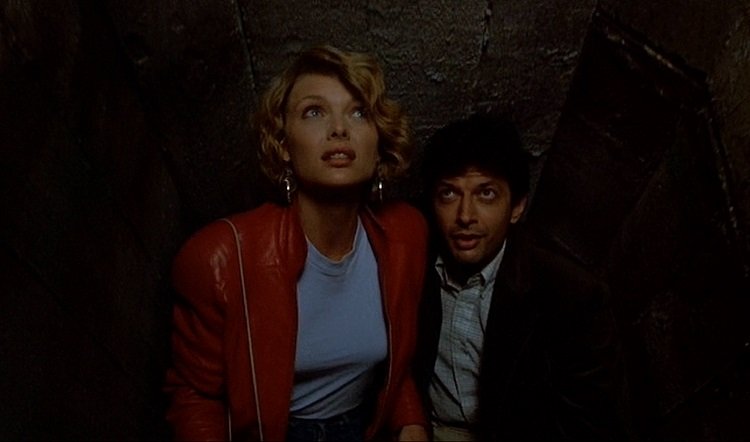 Into the Night (Shout! Factory, Blu-ray)

After the 1970s recast film noir in shades of nostalgia (Chinatown, 1974, The Late Show, 1977) and private eye revisionism and cynicism (The Long Goodbye, 1973, Night Moves, 1975), the eighties gave it a burst of color and energy with Neon Noir. John Landis’s Into the Night (1985) doesn’t have the self-consciously chiaroscuro lighting we associate with noir (Landis uses light for clarity, not atmosphere) but otherwise he takes a classic noir story—the middle-class innocent jolted out of his protected but dull existence and plunged into a nightmarish odyssey into the urban underworld—and treats it right. It was a commercial disappointment in its day and tends to be forgotten in the annals of post-noir crime cinema but if anything it looks better today than it did in eighties.

Jeff Goldblum is our married suburban everyman Ed Okin, an aerospace engineer whose dreams of space have been grounded in cubicle land, sleepwalking through his days and unable to sleep at night. “My life is a dead-end,” he tells his carpool coworker (Dan Aykroyd), “I feel like I’m from another planet,” and things don’t improve when he finds his wife having an affair (but slinks away rather than confront her). This isn’t a man bored by his compromises to conformity, but a man unsure why he is so unfulfilled after doing everything right.

Trying to shake it off, he drives to the airport (taking Aykroyd’s suggestion to fly out to Vegas or just drifting?) and ends up playing getaway driver for former model and jilted mistress Diana (Michelle Pfeiffer) as she runs from Iranian gangsters. She smuggled the film’s MacGuffin into L.A. and finds herself out of her depths when the Persian hit squad murders her partner in crime. Ed may be in the wrong place at the right time, but rather than the wrong man, he’s the right guy in every respect. As Diana is turned away or betrayed each time she reaches out for help, Ed finds not just an inner strength but an almost old-fashioned sense of heroism and a surprising calm in the midst of chaos and threats.

The daytime is the familiar, the mundane, the quotidian, from rush hour traffic jams to dull business meetings. The night is magical, dangerous, filled with the unexpected, the natural habitat of criminals and violence, yes, but also an arena that brings out the hidden reserves of the disaffected Ed, who turns out to be a hero in search of a quest. In the face of danger, he’s instinctively spurred to action. He’s resolute and nervy while confronting gangsters and killers, even flippant by the end, playing head games with a crime boss like he’s holding a winning poker hand and daring his opponent to call. Unrealistic as a drama of human behavior, perhaps, but fitting for a story about a suburban guy woken from his sleepwalking existence by his underworld odyssey.

This is surely the most romantic neo-noir of its era. It’s witty and often funny without ever playing Ed’s situation for laughs, and the humorous undercurrent is consistent with the film’s dreamlike quality. Goldblum’s gags are strictly during interludes between danger while Landis himself leads the slapstick treatment of the Iranian gangsters as the lead klutz of the homicidal four stooges. It adds an edge of black comedy while never forgetting the fatal consequences of the game. After all, their first act is to slash the throat of Diana’s partner, and the film ends in a brutal gunfight that leaves bodies blooded and splayed through the airport. And while Diane is no innocent bystander pulled into crime, neither is she a classic femme fatale. The vulnerability under her tough talk and social armor keeps us off-balance and maybe even brings out Ed’s chivalrous side. This is the flip side of Martin Scorsese’s After Hours, where the city after dark is truly dangerous and the innocent in its web finds he’s unexpectedly at home in the dark.

David Bowie is great as a curiously out-of-time assassin, a glib killer wearing fashions a couple of decades out of date and talking like a guy who imagines himself in a private eye movie, and Richard Farnsworth, Vera Miles, Irene Papas, and Kathryn Harrold co-star. Landis kicked his penchant for casting fellow directors and classic rockers into small roles into high gear with this film. In addition to meaty supporting roles for Paul Mazursky (as a TV producer) and Roger Vadim (a French mob boss), you can find David Cronenberg, Richard Franklin, Colin Higgins, special effects legend Rick Baker, Jonathan Lynn (memorable as a British tailor), Paul Bartel, Don Siegel, Jim Henson, the great Jack Arnold (walking his dog in the wrong place), Lawrence Kasdan, Jonathan Demme, and Amy Heckerling, plus Carl Perkins as a stylish bodyguard among the cameos and bits. And for the record, the film gave both Jeff Goldblum and Michelle Pfeiffer their first name-above-the-title leads and they carry it well.

The new “Shout Select” Blu-ray from Shout! Factory presents a newly remastered edition and looks beautiful. It preserves the rich, deeps colors set against the city at night and sets them off beautifully, earning the term that I used at the top of the review: Neon Noir.

John Landis and Jeff Goldblum are interviewed for new featurettes. “John Landis: Back Into the Night” (25 minutes) is filled with production details and stories, including how casting changed the texture of the film. Landis had Gene Hackman and Jamie Lee Curtis lined up for the leads but the studio nixed Hackman and Curtis begged off for another film. Landis ended up giving both Goldblum and Pfeiffer their first big screen leads, and in the process made Ed a younger man, which gives the romance a sexier, more natural quality without any overt romantic scenes.

“Jeff Goldblum: Requiem for an Insomniac” (22 mins) is a bit more eccentric, jumping around topics and following Goldblum’s offbeat train of thought, which includes discussing his career, the art and business of acting, and how much he enjoyed making the film.

Into The Night [Collector’s Edition] [Blu-ray]