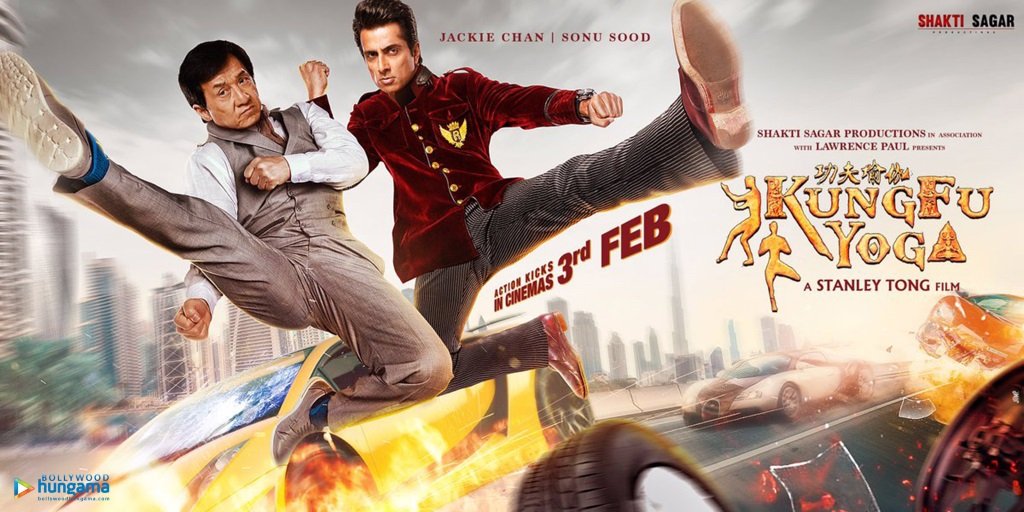 It took so long for Hollywood to finally find a way to harness the unique mix of martial arts mastery, dance-like grace, playful humor, and giddy charm that had made Jackie Chan a superstar throughout the rest of the world that he was almost too old to show off the extent of his physical prowess on display in his most jaw-dropping sequences. But if it curtailed his most daring physical stunts, age has not slowed his output and he’s returned to China as active as ever. Which is not to say his films are as good as ever—even with the variety of genres letting him jump from action comedy to thriller to drama, they are in inconsistent bunch—but even in the sloppiest films, Chan is a joy to watch in motion.

In Railroad Tigers (China, 2016), Chan is the leader of a scruffy band of rural railroad porters who stage raids on Japanese trains running through occupied China in World War II. They drop into moving trains, steal food for the villagers, and leave their mark by drawing flying tigers on the bodies of the unconscious Japanese soldiers and engineers, often badly drawn that the authorities can’t always make out the images. So yes, it’s an action comedy as well as a period caper and a mission movie, and Jackie shares stunt duties with a cast of younger actors. It’s not just Jackie who stars but the award-winning Jackie Chan stuntman association.

The opening heist is a terrific sequence, directed by Ding Sheng with a rollicking energy I haven’t seen in Jackie’s films for some time, and it raises hopes for a better film than the one that finally leaves the station and sends the squad of amateur guerrillas on a military mission to blow up a key bridge on the Japanese supply lines. Joining the mission in various capacities are his hammer-wielding partner (Zitao Huang), the dour noodle shop owner and former soldier who happens to be a crack sharpshooter (Kai Wang), and Auntie (Xu Fan), always ready to slip the authorities a mickey through a drugged potato pancake. Jaycee Chan (Jackie’s son) also joins the fun. The occupying Japanese are led by the vicious Captain Yamaguchi (Hiroyuki Ikeuchi), the standard torture-loving military villain of such Chinese war movies whose most distinctive characteristic is that he’s almost comically persistent; his ability to survive and bounce back from seemingly fatal events is a gimmick that defies logic. Much like the rest of the film.

It’s really something of a sprawling mess that director Sheng lets tumble out of control. There are some clever action scenes that combine Chan’s trademark mix of acrobatics, agility, and comedy to good effect but much of the whimsy is out of place in a situation where such actions bring brutal reprisals; even a ritual suicide scene is played for laughs. The final act is an overstuffed spectacle where the stunt work gets swamped by cartoonish CGI: military tanks on flat cars blasting away at raider and each other, railway cars colliding and tumbling over one another, obviously animated explosions, and characters reduced to computer generated figures swinging wildly below the target bridge. At times it’s a blast but the rest of it is sustained largely by the power of Chan’s charm and the grace of the clown prince of kung-fu comedy. Even at the age of 62, the man moves with an elegance unmatched by anyone in the world.

Not rated, with original Mandarin and English dub soundtracks

On Blu-ray and DVD from Well Go, with four featurettes (in Mandarin with subtitles).
Railroad Tigers [Blu-ray]

For Kung Fu Yoga (China, 2017), Jackie Chan returns to the Indiana Jones-inspired adventure comedy of his 1986 hit Armour of God, albeit as an older, more modest archaeologist adventurer, for this coproduction between China and India. Jackie is Professor Jack Chan, ostensibly the same character he played in The Myth, who is lured back into the field by a beautiful Indian archeology professor (Disha Patani) with an ancient map to a lost treasure. They decipher the hidden symbols and set off together—with their young teaching assistants and a wily treasure hunter named Jones (played by Aarif Rahman)—to the ice-covered mountains of Tibet, where they battle a prince (Sonu Sood) who lays claim to the fortune. The title does not refer to some new fighting technique but to the meeting of two cultures: the martial arts of China as practiced by the men in the film and the yoga traditions of India followed by the women, including a Chinese archeology student who shows off her limber moves while a male student watches pop-eyed and jaw-dropped.

Stanley Tong directed Chan in two of his biggest hits, Supercop (aka Police Story 3) and Rumble in the Bronx, as well as The Myth. His métier is the mix of martial arts and comedy and that’s exactly what this is, but it’s also an ungainly, episodic action film with a big canvas and a price tag to match. It opens on a piece of pure ancient fantasy, like a Lord of the Rings battle in ancient India with second-rate computer animation giving the giant elephants and gravity-defying warriors a cartoonish quality, and then goes off in all directions from there with big set pieces set in the frozen snows of the mountains between Himalayas, an underground ice cave, a private zoo in a Dubai palace, and an underground palace of gold beneath an ancient temple. It also tosses in a car chase with a roaring lion in the back seat (it’s a CGI creation), an escape from a pit of hyenas (more CGI), lots of free-for-all battles with armies of henchmen (the younger stars carry the more acrobatic sequences), plenty of slapstick comedy, a suggestion of romance, and a climactic Bollywood dance number. There’s even a scene right out of Raiders of the Lost Ark, but at least it’s knowing enough to name-check it.

Chan is no longer able to do the daredevil acrobatics of his youth but he shows off his talents in some marvelous, cleverly choreographed sequences that showcase his dexterity and comic grace. He’s still impressive to watch in action and the film brings in a number of younger actors to handle some of the more gymnastic action scenes. While the stunts are real, the film leans on digital effects for the animal scenes, car chases, and epic sets and they are often rushed and undercooked. And the film is a mess, split between a bunch of characters and jumping genres at every cut, with a juvenile humor clearly aimed at younger audiences.

Not rated but family friendly. The dialogue is a mix of English (the common language between the two culture) and Mandarin with English subtitles.

On Blu-ray and DVD from Well Go, with a 21-minute “Making of” featurette (with subtitles) and five short promotional featurettes with cheesy graphics scrawled across them.
Kung Fu Yoga [Blu-ray]