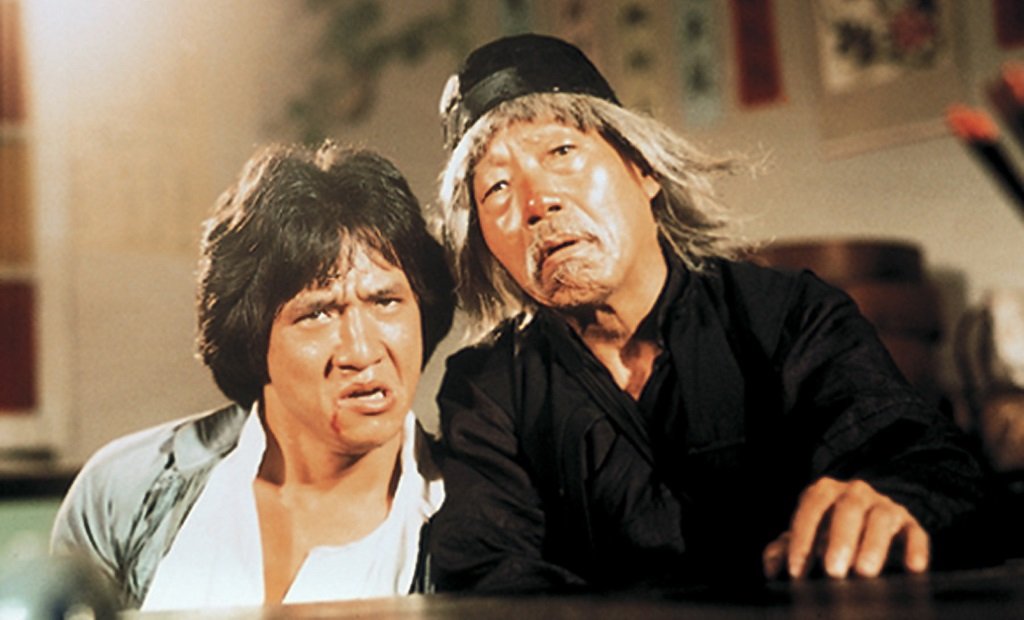 Boyish, baby-faced Jackie Chan trained at the famed Peking Opera Academy, had an early career as a stunt man, supporting player and fight choreographer in scores of Hong Kong films, and was unexpectedly chosen as “the next Bruce Lee” in a series of stiff, serious revenge adventures. This misguided attempt almost ended his shot at stardom before it began; Jackie’s charms have everything to do with his outgoing personality and self-deprecating humor, and an acrobatic fighting style schooled in Chinese Opera. After a series of super-serious action film flops his career was practically written off. Then producer Ng See Yuen paired the young performer with director Yuen Woo-ping for a pair of films that played up his strengths. The rest, as they say, is history.

In Snake in the Eagle’s Shadow (Hong Kong, 1978), Jackie plays a menial servant in a school for martial arts who saves the life of an aged vagrant (director Yuen Woo-ping’s father Yuen Siu-tin, aka Simon Yuen), who just happens to be a martial arts master on the run. Cut to training sequence, toss in the sight gags, and unleash Jackie’s Chinese Opera style. It was the first time that Jackie got to display his gymnastic martial arts style and his facility for physical humor and it was a success, which of course demanded an immediate follow-up.

Drunken Master (Hong Kong, 1978), a comic take on folk hero Wong Fei Hung (whose adventures had previously been chronicled in over 100 films), is a semi-sequel to Snake in the Eagle’s Shadow. This time Chan and director Yuen refined the mix comedy and kung-fu and pushed the stunts to crowd wowing levels. The plot is an eminently familiar martial arts formula: a rebellious troublemaker in need of guidance enters a grueling training regime under a master teacher (a red nosed Yuen Siu-tin once again) who teaches Jackie the secret art of Drunken Boxing, so-called because the flowing, weaving movements of the fighting style. Of course, the consumption of alcohol only helps master this technique. He ultimately defends the honor and the lives of his loved ones in a deadly battle to the finish, but not before generous amounts of brawling, practical joking, and of course epic drinking.

The infectious mix of slapstick sequences and amazing martial arts moves breathes new life into the old school of Hong Kong action. The almost clockwork alternation of comic and action scenes is as unmistakable as the freeze-frame-like fighting style, where every move is momentarily held like a tableaux-like pose before moving on, but Chan and Yuen smooth out the jerky style with the lolling grace of the drunken fighting style. The young master flexes himself in bravura moves, most notably in the extended fight to the finish with the hissable villain. It firmly established Jackie Chan as the undisputed king of comic kung fu.

Each film in the Twilight Time double feature offers Cantonese, Mandarin, and English language soundtracks (all in DTS mono) with optional English subtitles. In Drunken Master, some sequences substitute the English dub for missing Cantonese and Mandarin audio.

This era of Hong Kong martial arts cinema was notorious for poorly-preserved materials but these two presentations, licensed from American rights-holders Sony Pictures, look astoundingly good. The source materials are clean and unmarked by wear or damage, the picture quality is sharp, and the color is strong. The mono soundtracks are a little flat but that’s inherent in the source.