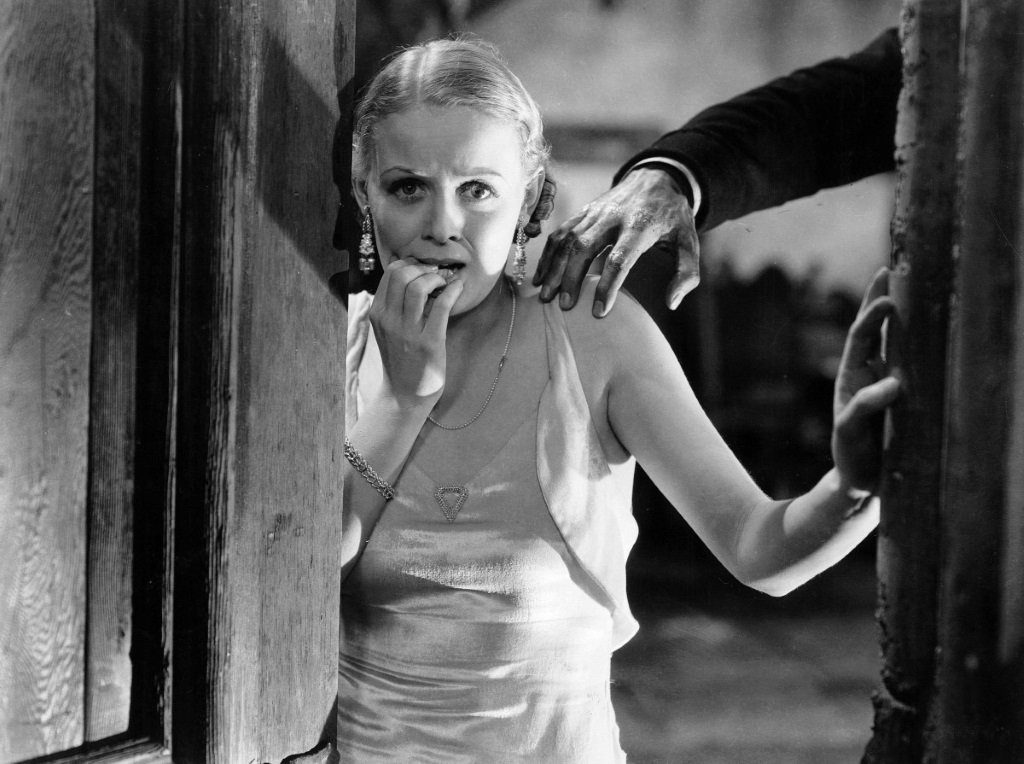 Boris Karloff (fresh from his star-making turn in Frankenstein) takes top billing in the supporting role of Morgan, the scarred, mute butler with a penchant for drink and a vicious mean streak, but the film is really an ensemble piece. Melvin Douglas is the wisecracking romantic lead caught in a raging thunderstorm in the Welsh mountains with bickering couple and traveling companions Raymond Massey and Gloria Stuart. They take refuge in the creepy old manor of the title, lorded over by the gloriously flamboyant Ernest Thesiger and his dotty, fanatical sister Eva Moore, when a landslide wipes out the goat-trail of a mountain road, and are later joined by more stranded passengers: a hearty Charles Laughton, whose Lancashire working class accent and blunt manners sets him apart from the social graces of his companions, and his “friend” Lillian Bond, a chorus girl with a chirpy sunniness in the gloomy situation.

Based on a novel by J.B. Priestly, the film is short on narrative but full of weird and wonderful atmosphere, theatrical performances, and off-beat humor, much of it spinning around the eccentric brother and sister who have clearly not been around city folks for a long, long time.

It’s shot by the great cinematographer Arthur Edeson, who earned his first Oscar nomination for All Quiet on the Western Front (1930), and shot (among many other films) The Maltese Falcon (1941) and Casablanca (1944). The Old Dark House was his second of three films for James Whale (he also shot Frankenstein and the special effects-laden The Invisible Man, 1933). For the studio-bound production, which largely plays out in the big old manor set, he creates atmosphere with heavy, looming shadows on the walls cast (ostensibly) by the roaring fire in the drawing room fireplace and at times offer a shadowplay echo of the story in the foreground.

The flamboyant performances and Whale’s go-for-baroque direction goose the satire of manners and class warfare with winking campiness through the stormy evening of madness and mayhem as the batty old family reveals its dangerous secrets. Whale combines marvelous stylistic flourishes and witty drawing room dialogue with campy indulgence, creating a film both macabre and sardonic.

The mix of baroque horror and black humor reaches its fruition in Whale’s brilliant Bride of Frankenstein but The Old Dark House is more sly comedy than horror and the most bizarre example of 1930s Gothic horror you’ll find. It’s charms may not be readily apparent on first viewing but this is an oddity that grows on you.

Add to My List on Shudder or watch free on Kanopy or on Hoopla, which are free through most public and college library systems.

, iTunes, GooglePlay and/or other services. Availability may vary by service.
The Old Dark House [Blu-ray]

On Blu-ray and DVD from Cohen in a restored and remastered in 4K for a theatrical rerelease and new home video release, with its Blu-ray debut and a new DVD special edition. The HD image is gorgeous, sharp and clean with deep blacks and strong contrasts, and there is no damage. The soundtrack has a sudden increase in audio hiss for an eight minute stretch around starting at around the 57-minute mark, but otherwise the PCM 2.0 audio sounds great and the dialogue is clear and audible.

New to this edition is the 14-minute interview featurette “Daughter of Frankenstein,” a new interview with Sara Karloff conducted by Dean Otto, and a booklet featuring print excerpts from an interview with Curtis Harrington (conducted by David Del Valle) discussing The Old Dark House.

Carried over from the original 1998 laserdisc release are separate commentary tracks by star Gloria Stuart and film historian and James Whale expert James Curtis, a complementary pair which contrasts personal remembrances with historical background and critical observations, and a short interview with director Curtis Harrington, who became a close friend of James Whale and describes how he rescued the film from certain destruction.