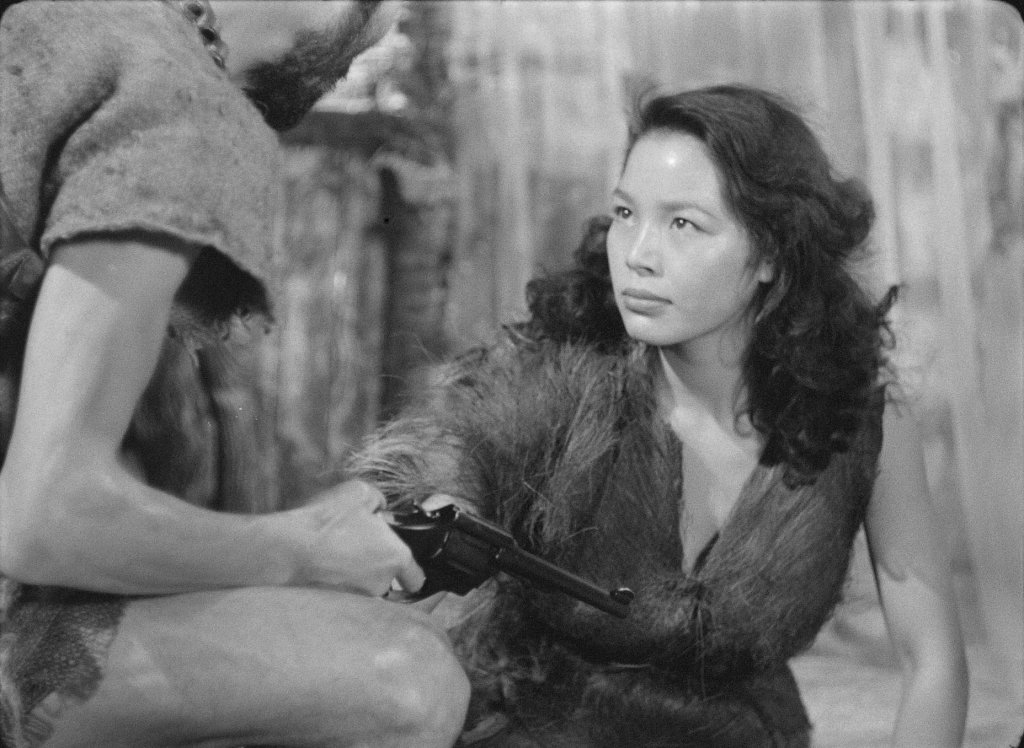 Inspired by the true story of Japanese sailors stranded on a deserted island during World War II, Anatahan (1953) was the final film completed by Josef von Sternberg. In a career where he was increasingly forced to compromise his style and sensibility, it marked his final hurrah: a film over which he had complete control.

After a prologue on a Japanese ship bombed by an American plane, the film takes place almost entirely on Anatahan, a former plantation island in the South Pacific that is now completely overrun by the tropical jungle. The twelve survivors, a mix of sailors and soldiers, find the old plantation and a couple who stayed behind when the rest of the island population either enlisted or was evacuated. “We were to be here for seven long years,” reports the narrator (Sternberg himself), speaking in a tone of recollection and reflection long after the fact. (There is no effort to assign the narration to an individual character; it could very well stand in as the guilty conscience of the survivors.) As they await their rescue, their discipline breaks down and their desire for Keiko (Akemi Negishi), the lone woman in the society of men, stirs them to aggression and murder, which becomes easier when they find and scavenge the remains of a downed fighter plane, including a pair of handguns. “There was no law on our island, no police,” observes the narrator. “Only two pistols.”

Sternberg wrote the screenplay, based on the novel by Michiro Maruyama, and shot the film in a film studio in Kyoto, Japan, where he oversaw the creation of the tropical island jungle, an entirely artificial set. Even the scenes on the ship and the final shots of the survivors returning home are shot against flat rear projection images (the long shots of the island itself is a painting), which enhances the theatrical quality of the story. Only shots of the vast ocean, waves crashing on the rocky shore, and Keiko escaping the male society to be alone with the surf show the “real” world, a harsh, primeval place that eventually becomes Keiko’s escape. Apart from the English narration, the dialogue is entirely in Japanese with no subtitles, but the drama is clear from the commentary and the imagery.

The result is the most stylized of Sternberg’s films, a languid portrait of lust, power, anger, violence, regret, and loneliness shot at an emotional remove, staged at arm’s length and observed with a dispassionate eye. Time passes but their world seems gripped in a stasis of denial (they dismiss messages from the outside world claiming the war is over as enemy propaganda), and only the changing outfits (the cloth of their outfits rot in the jungle climate and they resort to clothes woven from fronds, leaves, and bark) and the diminishing population marks the passage of time. You might expect Keiko to play the temptress (and she does dally with one of the men as she becomes fed up with the man they all assume is her husband but is merely possessive) but she’s little more than an object of desire to the men, a prize or a piece of property, first to be fought over and claimed and then assigned to one of them by drawing lot; a more peaceful solution for all but Keiko, who finally flees. It isn’t Sternberg’s dream movie of complete visual abstraction but it approaches that ideal with its lush images, underplayed performances, and dramatic flashpoints broken into fractured close-ups and distanced long shots, like a tropical Bresson film.

The film makes its Blu-ray and DVD debut from Kino Classics in a new 2K restoration from the original film elements of the uncensored 1958 version of the film (Sternberg’s preferred cut), which features nudity not seen in the original 1953 release. The disc also includes the complete 1953 version of the film (the brief alternate footage is taken from an archival French print with French subtitles). The differences between the two (only a few images and cuts) are compared in an 8-minute featurette, and the difference in running time between the two is only about 30 seconds.

“Saga: The Making of Anatahan” (15 minutes) is an interview with Josef’s son Nicholas von Sternberg, who was a toddler during the production and has few memories of the production but plenty of stories about his father, and he shares oil paintings with Japanese themes that Josef painted. Tag Gallagher contributes the visual essay “Whose Saga: Josef von Sternberg and the Saga of Anatahan‘ (16 mins). Also features outtake footage with Akemi Negishi (some of it nude) and location shots of the ocean and the coast (just under 3 mins), archival military footage of the real-life surrender of troops from the island of Anatahan and their return home to Japan, and trailers.