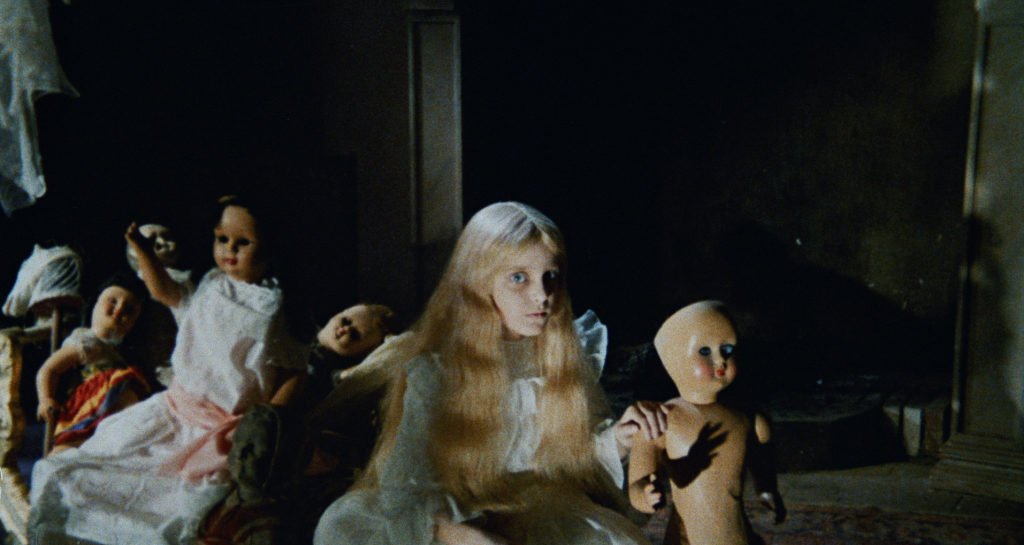 The title may sound like a serial killer thriller but Mario Bava’s Kill, Baby… Kill (Italy, 1966) is a Gothic ghost story with haunting images, grotesque edges, and glorious style. Think of it as Bava’s answer to a Hammer horror, with hysterical superstition and suspicion of outsiders replacing the lurid sexuality of Hammer’s Victorian horrors and Bava’s rich palette setting an altogether more expressionist atmosphere.

Shooting exteriors on location in rural mountain villages of picture-postcard medieval stone dwellings and labyrinthine streets, Bava creates a fairy tale world of an oppressively provincial 19th century village in the grip of a curse. At least that’s the explanation of the townspeople who dismiss the scientific investigation of Dr. Paul Eswai (Giacomo Rossi Stuart), a coroner from the city called into determine if Irena (Mirella Pamphili), a young woman whose death by impaling opens the film, was murdered or committed suicide. The villagers know—she is the latest victim of a curse upon the village—and do everything they can to drive the coroner and Inspector Kruger (Piero Lulli), the city investigator, from their insular little village. With the help of Monica (Erika Blanc), who was born in the village but sent away to school and has recently returned, Paul is determined to find the true cause of the inexplicable deaths plaguing the village.

The doctor’s arrival evokes the original Nosferatu, with its carriage driver who refuses to cross through the gate of the walled city, and the crumbling, derelict church suggests both a town that God has forsaken and a town that has forsaken God. The grand villa nearby, an echo of old feudal power now petrified into an ominous reminder of past sins, is haunted not by a ghost but a mad Baroness (Giovanna Galletti) riven with hatred and driven by vengeance for the death of her child long ago. Is it vengeance that conjures up the spirit of Melissa, a little blonde girl in a white dress who appears with a chilling smile to her victims, or the guilt of the villagers for their role in the girl’s death? Bava gives her the presence of a spirit or a phantom, glowing and not quite substantial, a mix of innocence and malevolence. Her ghostly image, appearing outside of windows or tossing a ball to her next victim, had to be an inspiration for Federico Fellini’s Toby Dammit (his section of the Poe anthology Spirits of the Dead, 1968).

Bava reverses the expectations of horror movie symbolism: the giggling little girl in angelic white is the harbinger of death and revenge while the grim, raven-haired Ruth (Fabienne Dali), “the sorceress” called in by the villagers visited by visions of the girl who dispenses brutal protective magic, is the force of benevolence. The angelic vision is the demon and the dark witch is the protector.

Bava isn’t one to lean on psychology but primal emotions—guilt, rage, wrath, retribution—are ultimately the foundation of this fatal haunting, though not necessarily the explanation. The logic of the enlightened doctor can’t explain away everything. And the magic at work is weird and insidious, from the power of the ghost to drive its victims to kill themselves to the Escher-esque nightmare of the doctor’s attempts to escape the villa.

I don’t know if I would nominate this as Bava’s greatest masterpiece but it is certainly one of his great achievements, a film that mixes emotion, psychology, and madness with Gothic horror and gruesome (but not gory) death and delivers one of the most beautiful horror films of the 1960s.

Features original Italian soundtrack and English language dialogue soundtrack (newly restored from 35mm elements) with optional English subtitles. I favor the Italian version, which sounds fuller and richer and features better vocal performances and better visual matches to the performances than the English. The new 2K master is gorgeous. Bava was the maestro of color and dreamy imagery in Italian genre cinema and the deep hues and expressionist lighting come alive here. You can see a little digital grain in the pale blue skies of the opening scenes (it looks like swarms of mosquitoes in the sky) but once it shifts into the colors of the night the distraction is gone.

Mario Bava biographer Tim Lucas provides audio commentary, a thorough, well-researched talk from perhaps the greatest authority on Bava and his films. He covers everything from production history to critical analysis and compelling observations. Also includes the previously unreleased 25-minute documentary featurette “Kill Bava Kill” with Lamberto Bava leading a tour of locations used in the film and discussing the film and the work of his father, and a 10-minute interview with leading lady Erica Blanc, plus an alternate German opening credits sequence, an international trailer, and three American TV spots.