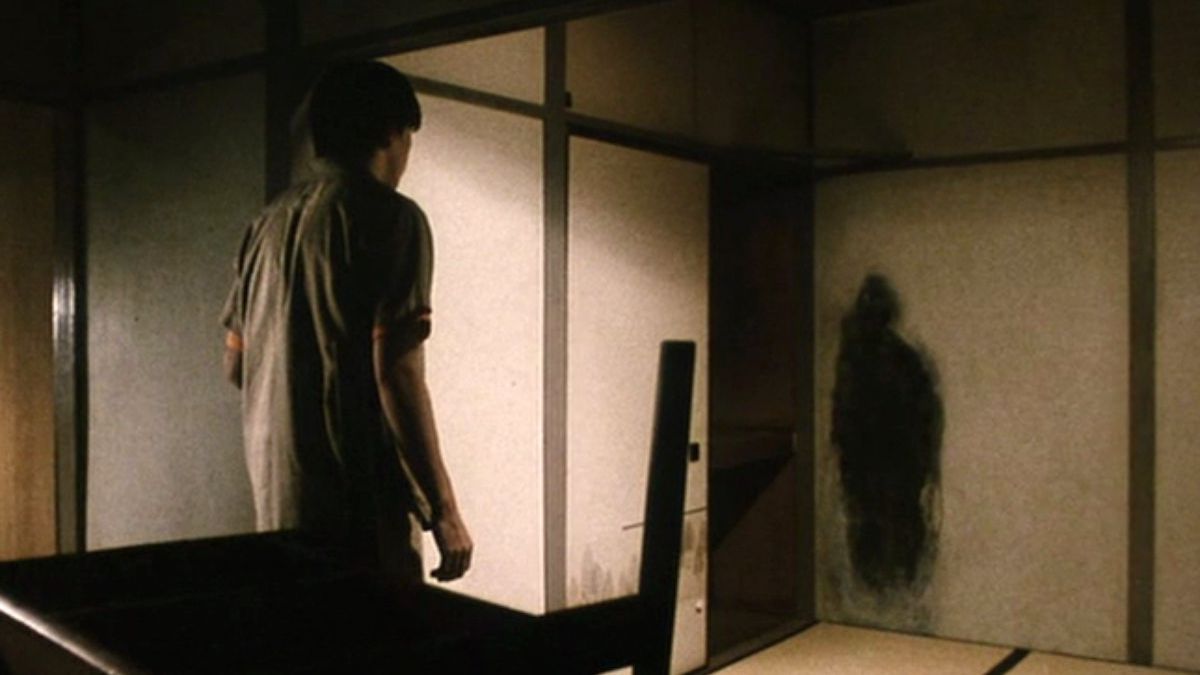 “Do you want to meet a ghost?”

The meditative and metaphysical horror cinema of Kiyoshi Kurosawa made him one of the masters of Japanese horror during its amazing cycle of surreal and nightmarish horror films of the 1990s and 2000s, but his films never really crossed over to the general audience in the U.S. His insidiously unsettling films were too slow and cerebral for traditional horror audiences while the “horror” tag kept away the kinds of viewers that would be in tune with his eerie tales of guilt and alienation. Unlike many of his contemporaries, he was never recruited by Hollywood, and so he remains known mostly to those viewers with a passion for Asian horror. Among those fans (and I count myself as one), Pulse (Japan, 2001) is embraced as one of his greatest works, perhaps his best.

Pulse opens on a city that is eerily empty of human activity. The population is gripped in what seems to be a plague of depression. Computer screens and cell phones are filled with the sputtering images and scratchy sounds of ghosts reaching out to the living, as if infected, and that infection is passed on to all who view the messages. The explanation is inspired: the realm of the dead is full and they are slipping into the realm of the living through the internet to stop more souls from passing over. They do by spreading despair and hopelessness, destroying humans from within until the bodies fade away, leaving only an oily smudge in their wake. As you look around the deserted remains of the cities, every mold stain on a wall could be a lost soul.

Pulse takes the idea that personal computers and the Internet isolate, rather than connect, people and uses it as the jumping-off point for a devastating portrait of mankind gripped by depression spun from a supernatural conspiracy. His low-resolution imagery blurs and smears images until they become indistinct ghosts, unformed sentinels both there and not, while the material world slips into a state of atrophy, a society literally stopping dead around our characters.

Kurosawa leaves much of the explanation enigmatic and directs with a slow, deliberate rhythm that slips the weirdness under the radar by letting it grow out of the leisurely pace and mood, creeping in like an infestation, until it takes over and defines the world. Years later it remains unique, an insidious portrait of a fate worse than death—despair and an eternity wandering the Earth as a lonely, tortured ghost trapped in apathy—and it ends with an image of haunting isolation. The 2006 American remake has none of the eerie power of the original.

Arrow presents the film’s stateside Blu-ray debut in a Blu-ray+DVD Combo with a whole haunted hard drive of supplements (presented on both editions). Leading off the collection is “Broken Circuits,” an interview with Kiyoshi Kurosawa covering his career, including the early V-cinema productions (Japan’s direct-to-video industry) that helped shape his style and sensibility. It runs about 44 minutes. “Creepy Images” is a 25 minute interview with cinematographer Junichiro Hayashi and “The Horror Of Isolation” features filmmakers Adam Wingard and Simon Barrett discussing the film and their appreciation of Japanese horror films of the early 2000s (17 mins).

Carried over from previous American DVD release (from Magnolia in 2006) are the 41-minute “The Making of Pulse” and four short featurettes on individual scenes and effects collected under the umbrella “Special Effects Breakdowns.”

The first pressing includes an illustrated booklet with a new essay by critic Chuck Stephens.