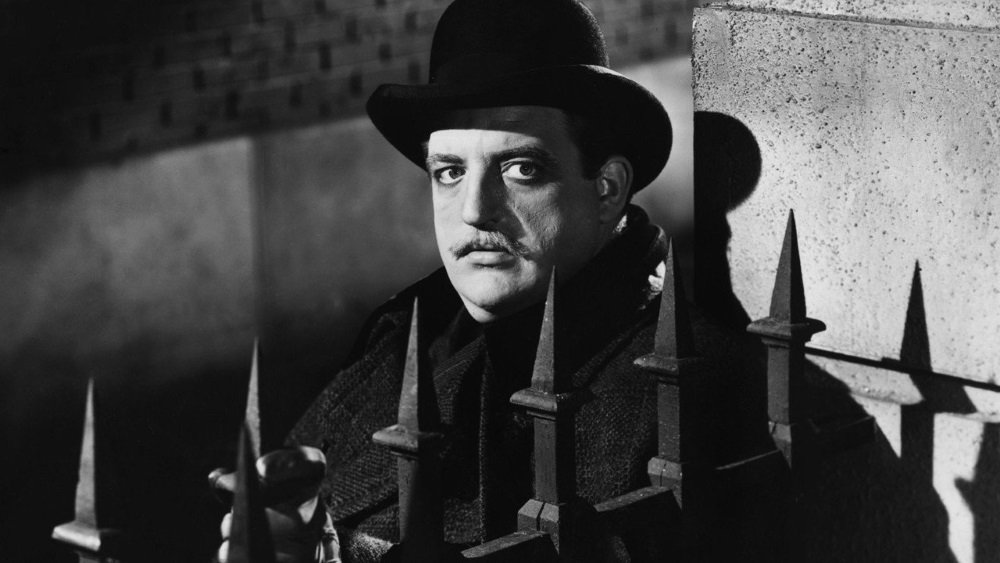 Laird Cregar is The Lodger (1944) (Kino Lorber Studio Classics, Blu-ray) in the third screen adaptation of the thriller by Marie Belloc Lowndes (the most famous was the 1926 film directed by Alfred Hitchcock) set in London during the reign of Jack the Ripper.

While the city panics in the wake of another murder of a showgirl by the knife-wielding madman, a man who identifies himself as Mr. Slade (Cregar) takes a room in the middle-class home of an elderly couple with financial difficulties (Sir Cedric Hardwicke and Sara Allgood). Also living there is their niece Kitty Langley (Merle Oberon), an attractive, flirtatious entertainer making the leap from music halls to more respectable theaters, and the Bible-quoting Slade can barely hide his fascination behind his admonitions of sin and temptation. George Sanders co-stars as the Scotland Yard investigator who becomes sweet on Kitty and suspicious of Slade. For good reason.

This is film noir by way of gothic thriller, a shadowy suspense thriller in the Victorian era of gaslight and horse drawn carriages on cobblestone streets, and director John Brahm gives the film a lively energy. He plunges the night scenes into shadow and fog and suspense and directs Cregar to an intense psychological pitch of barely suppressed mania and hysteria. In one superbly-crafted scene, as Slade emerges from the shadows of an old street singer’s dreary rented room, the camera takes the killer POV with a handheld camera creeping in the old woman, who is so panicked that she can’t catch her breath to scream. Brahm makes the terror palpable and physical.

Cregar is third billed in the credits but he dominates the film, dramatically and physically. From the opening scenes of Slade strolling against the stream of civilians rushing through the streets to the site of the latest Ripper killing, he is a man apart from the crowd, even when there’s only one other person in the room. Cregar gives Slade an ominous, unsettling presence, soft-spoke man who keeps unusual hours, uses the back door exclusively, and furtively fidgets with a shifty, sweating unease after every new murder is reported. Brahm adds a weird homoerotic edge as Slade shows a self-portrait of a beautiful, sensitive young man, a budding artist who killed himself over a woman. His brother, he says, but his affection borders not just on obsessive but on sexual attraction and unrequited love. There is something a little too intense in his dreamy remembrances, a little too angry in his vengeance. You wonder if it was a little close to home for Cregar, a heavy-set gay man in Hollywood desperate to become a romantic lead and self-conscious about his appearance.

Merlo Oberon overcomes miscasting—she’s frankly a little too dignified and elegant for the part of a middle-class girl who went into show business and worked her way out of music halls into classier theatrical revues—but she makes it work by sheer force of confidence and experience and a cheery command of every scene. She’s someone who knows she’s a star before everyone else does and plays the role like a confident veteran who hasn’t lost her connection with the fans and fellow performers rather than a young talent on the rise.

It is a superior Hollywood thriller of the era, beautifully crafted and more faithful to the novel than Hitchcock’s version. Hitchcock transformed the story into the kind of wrong man thriller that became his specialty. Brahm creates a Gothic thriller of a sexually-repressed serial killer.

Previously on DVD, Kino presents the Blu-ray debut in a fine edition. I love black and white on Blu-ray and this is a well-mastered transfer from the 2007 restoration, which shows minor wear (light vertical scratches appears in a brief spots) but a strong contrasts and a sharp image. New to this edition is commentary by film historian Gregory William Mank. Carried over from the 2007 DVD is commentary by film noir experts Alain Silver and James Ursini, a featurette, a vintage radio show adaptation featuring Vincent Price, a brief restoration comparison, and an animated gallery of posters and ads.
Lodger [Blu-ray]