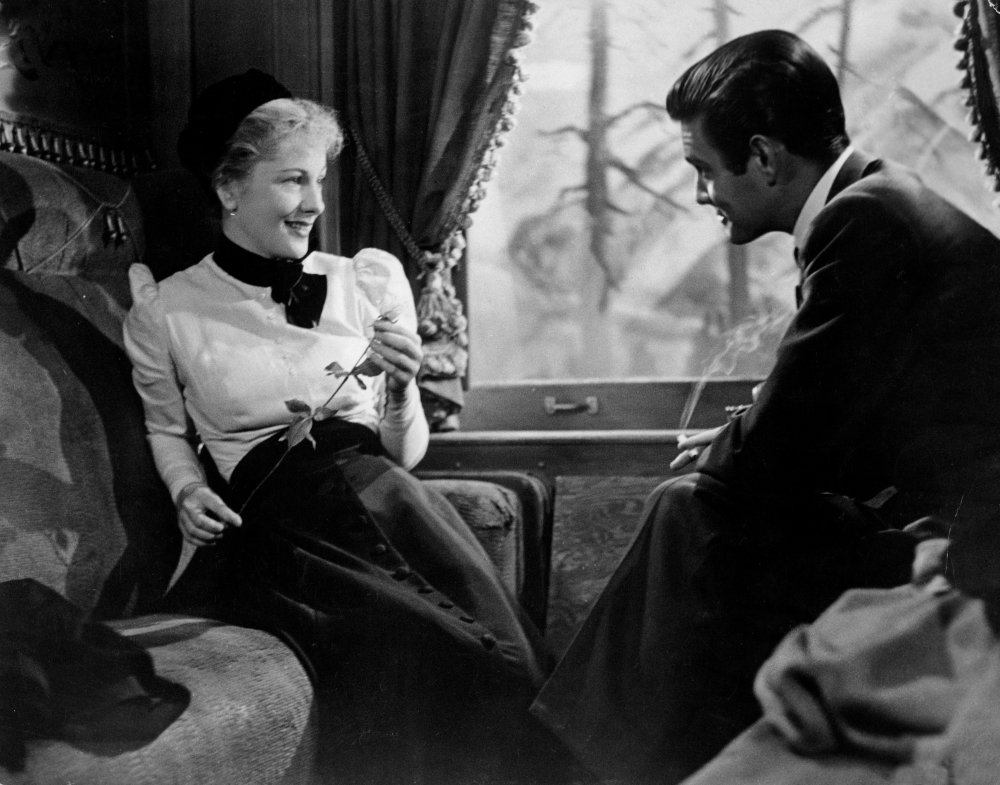 Letter from an Unknown Woman (Olive Signature, Blu-ray) (1948), the second Hollywood film by European émigré Max Ophüls (who was credited as Opuls on his American movies), is his first American masterpiece, an exquisitely stylish romantic melodrama (based on a novel by Stefan Zweig) informed by his continental sensibility.

“By the time you read this letter, I may be dead,” reads aging bon vivant Louis Jordan from a letter found in his tiny hotel room. Hair tousled and tux tired from yet another night of meaningless flirtation, he’s startled by these opening lines and suspends his preparations to flee a duel to read the history of a love affair that he can’t remember. For the rest of the film we’re transported to the life of Joan Fontaine’s awkward young Viennese woman, hopelessly enthralled by the dashing pianist from adolescence and momentarily his lover, the emotional pinnacle of her life but for the philandering rogue simply another fling in a blur of women passing through his bedroom.

Fontaine delivers one of the best performances of her career, vulnerable and yearning without lapsing into sentimentality and ultimately showing a hidden strength as she risks all for one more moment with the love of her life. Jordan is genial and callow, an empty figure faced with the meaningless of his life and shamed with self-discovery. Meanwhile Ophüls’s endlessly moving camera tracks, cranes, and circles around the characters while maintaining a measured distance, offering a privileged view of intimacy that captures both her life-defining rapture and his momentary engagement. (The elegant cinematography is by the great Franz Planer.) It’s a sensibility more European than American, right down the empty gesture that concludes this sad melodrama, but it’s also a transition to making films in the American vernacular. Letter from an Unknown Woman is a Hollywood draft of films to come upon returning to France, notably The Earrings of Madame de….

Olive Films gave Letter its long-awaited stateside debut on Blu-ray and DVD back in 2012. Now it presents an “Olive Signature” special edition along the lines of a Criterion release, beginning with a superb new 4K restoration provided by Paramount Pictures. The disc is gorgeous, sharper and with more detail than the previous Blu-ray, and is clean and free of any artefacts or imperfections. It is a noticeable improvement from the previous edition, which featured no supplements.

The disc features a new commentary track from Max Ophüls expert Lutz Bacher, who delves into Ophüls’s shooting methods and the visual style of the film, and the new 24-minute visual essay “Letter from An Unknown Woman: Passion’s Triumph” from Tag Gallagher, produced for this edition. Also features a set of new interviews: “A Deal Made in a Turkish Bath” with Max Ophüls’s son Marcel Ophuls, the Oscar-winning documentarian (13 mins), “An Independent Woman: Changing sensibilities in a post-war Hollywood” with film professor Dana Polan (16 mins), and “Ophülsesque: The Look of Letter from an Unknown Woman” with contemporary cinematographers Ben Kasulke and Sean Price Williams (17 mins). The accompanying booklet features an essay by Molly Haskell.