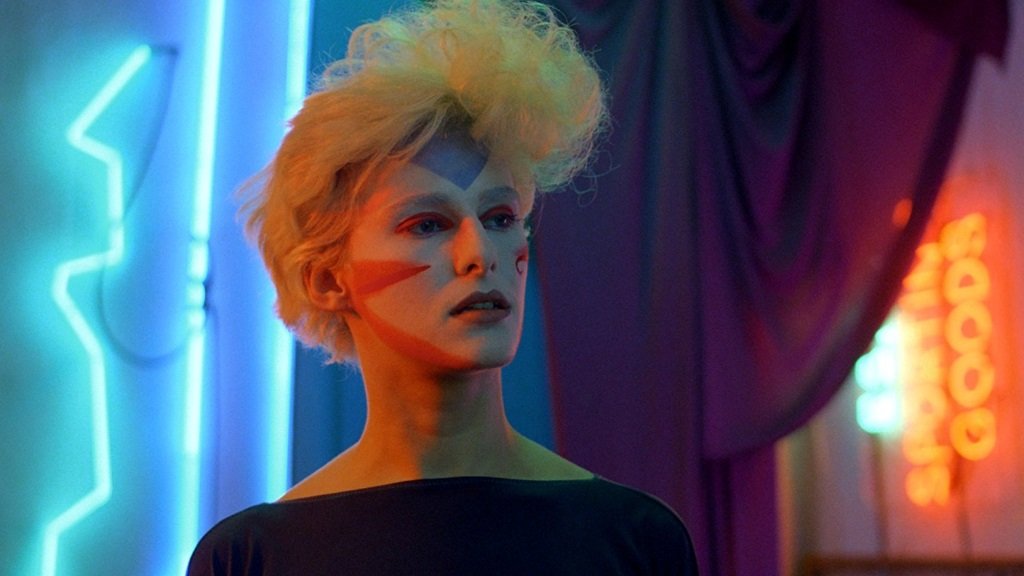 An avant-garde artifact straddling the eighties movie underground and the growing American independent movement, Liquid Sky (1982) broke into the college film circuit thanks to a trippy mix of drug culture, sexual androgyny, and indie sci-fi weirdness playing out in the New York eighties bohemian scene. Director Slava Tsukerman was a Russian émigré who studied at the Moscow Film Institute and worked in the Israeli film industry before moving to New York and immersing himself in youth culture to make his American film debut. He really is a stranger in a strange land and he embraces it, observing his New Wave melodrama from the alien perspective of a sensation-seeking UFO in search of the human heroin high and discovering something better: the chemical blast of orgasms.

Anne Carlisle, a model and actress in the New York underground, co-wrote the script with Tsukerman and producer Nina V. Kerova and plays two roles: the jaded Margaret, a bisexual model who lives with performance artist and heroin dealer Adrian (Paula E. Sheppard), and her male model nemesis Jimmy, a sneering, preening would-be celebrity and drug addict. While they provide a tour of the underground clubs and rebel fashion culture, freelance German scientist Johann (Otto von Wernherr) tracks the alien invasion to Margaret’s apartment (where a tiny flying saucer feeds off the chemical euphoria unleashed by her lifestyle) and provides the exposition to his new landlady. The fact that he’s right (and still sounds like he’s off his meds) doesn’t give us any more confidence in him, perhaps because he’s kind of alien himself, utterly baffled by American culture and clueless to the flirtations of his landlady, who is as subtle as a stripper at a bachelor party.

Tsukerman has a minimalist style and languorous pacing, not stiff so much as affected, as if everyone is redefining themselves through social performance and fashion. This is a culture where appearances are all and drugs distract from the numbing experience. The atmosphere is like an opiate haze, where the characters rarely seem to be engaged in the same discussion. Even sex is a performance or an act of aggression rather than a shared experience. And then Margaret’s world is flipped when her sexual partners all die with a crystal shard in their skull and, later, zap out of existence, driving her from panic to guilt to predatory aggression.

It’s a film about performance art that feels like performance art, a surreal genre film that straddles American underground rebellion and European art movie, which Tsukerman energizes by crosscutting his various story threads. That’s not to say the film is dull; it’s actually kind of hypnotic. Tsukerman uses video camera heat signatures for the alien POV, slips into abstract computer video art to show the alien watching the orgasm become a chemical explosion in the brain, and resorts to weird DIY animation for the disappearing victims of the invisible alien feeding frenzy. Profanity abounds and there is more drug consumption than the green room of a heavy metal show.

I saw the film when it became a cult item on the college circuit and, while my 35-year-old memories are a little tenuous, I’m willing to bet the film didn’t look as good as it does in this 4k restoration from the original 35mm negative, brought to Blu-ray by cult/underground/alternate movie specialist Vinegar Syndrome. The colors are vivid and intense (Tsukerman lit part of the film with neon lights and uses fluorescent makeup in a key sequence) and the clarity brings out the details of the settings in the minimalist production, from the New Wave thrift store fashions to the underground club settings and apartment clutter.

Originally released in a limited edition with day-glo packaging and an exclusive booklet (now out of print and fetching collector prices), it is now available in a mass market, region free Blu-ray+DVD combo (region free) with all the video supplements of the earlier release (but not the accompanying booklet).

A generous collection of supplements were created for this edition in collaboration with Tsukerman and many of his collaborators. Tsukerman and actress/co-writer Anne Carlisle provide a newly-recorded commentary track and Tsukerman himself directs and hosts the new retrospective documentary “Liquid Sky Revisited” (52:56) which includes new interviews with writer-producer Nina V. Kerova (Tsukerman’s wife and collaborator), production and costume designer Marina Levikova-Neyman, director of photography Yuri Neyman, makeup and hair designer Marcel Fiévé, and actors Susan Dougkas/Brady, David Ilku, Neke Carson, and Jeff Most. It doesn’t have the polish of most made-for-disc featurettes but Tsukerman’s presence seems to bring out the warmth of his collaborators, who all wax nostalgic for the production. Along with clips of the film (seen in unrestored, non-widescreen video versions) there is rehearsal and audition footage from archaic, unrestored old Betamax tapes.

There’s also an introduction by Tsukerman (1:32), new interviews with Tsukerman (15:46) and Carlisle (9:46), a Q&A from the 2017 Alamo Drafthouse Yonkers screening with Tsukerman, Carlisle, and co-composer Clive Smith (37:19), outtakes (13 mins, with no soundtrack, more rehearsal footage (the image has degraded quite a bit after more than 35 years), a gallery of stills, four trailers, and an isolated soundtrack viewing option.