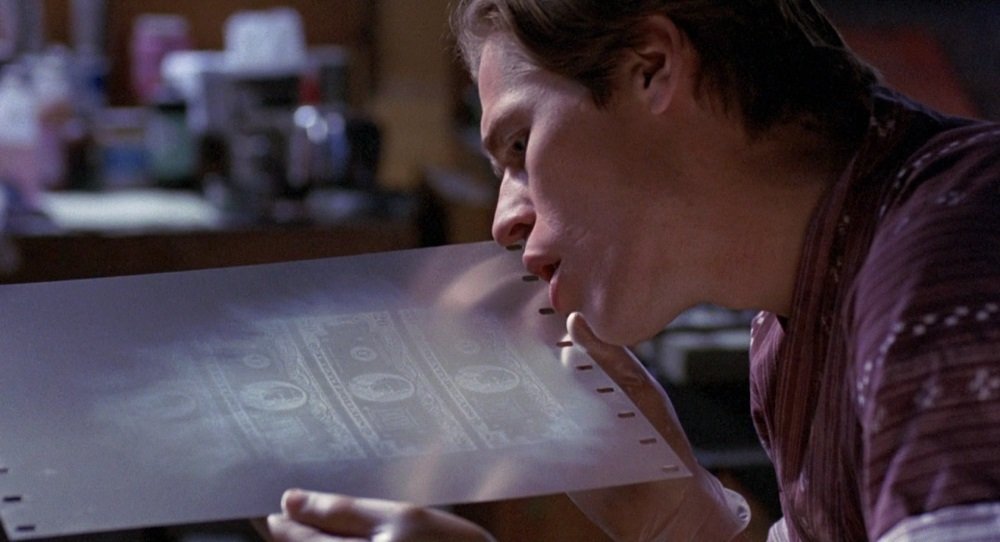 To Live and Die in L.A.: Collector’s Edition (Shout! Factory, Blu-ray) (1985) has aged well. While on the one hand you can hold it up as the quintessential expression of the era’s music video aesthetics and sleek, slick style, it’s also a distinctively singular, perfectly pitched action thriller from William Friedkin, a director in full command of his tools, including the high-octane style of neon surfaces, rapid editing and driving music.

William L. Petersen was poised to make the leap from respected stage actor to intense screen star when he was cast as Secret Service agent Richard Chance, a rising star working in the Treasury Department who thrives on the adrenaline of the job. When his mentor, partner, and best friend is murdered while following up a lead on counterfeiter Rick Masters (a feral Willem Dafoe in his breakthrough performance), he goes rogue and drags his new partner, the smart but still green John Vukovich (John Pankow ), into his increasingly reckless stunts. The film’s defining scene is the ingenious, nerve racking car chase that sends Chance and Vukovich up an off-ramp the wrong direction on the L.A. freeway, swerving and skidding around oncoming traffic, but it’s actually the climactic punch of a brilliantly composed car chase that begins in the no-man’s land under the freeway, carries us into traffic with a perfectly executed traveling crane that reveals the chase car closing in and sends us winding through the freight-strewn alleys of this warehouse district and into the empty L.A. basin, where a brace of cars close in and ups the stakes.

Adapted from the novel by former Secret Service man Gerald Petievich by Friedkin and Petievich, it’s a cynical and brutal portrait (both physically and emotionally) of the federal cops walking the edge and a cold portrayal of the power games between cops and feds, and cops and informants. Friedkin creates a jittery atmosphere of adrenaline and corruption and danger, enhanced by a surprisingly effective techno soundtrack by Wang Chung (the band’s best work) and draws savage performances from his entire cast, which includes Debra Feuer as Dafoe’s sexy lover, Darlanne Fluegel as the informant parolee that Chance keeps under his thumb, John Turturro as a courier arrested by Chance, and Dean Stockwell as the counterfeiter’s high-priced attorney.

The film has been on Blu-ray before. This Shout Select edition is newly remastered from a 4K scan of the original negative, supervised and approved by filmmaker Friedkin. The old MGM release was quite good but this edition offers greater detail, stronger blacks, and a slightingly more nuanced color palette.

Carried over from the earlier Fox releases are the sharp and articulate commentary by Friedkin, the half-hour documentary “Counterfeit World: The Making of To Live and Die in L.A.,” and a deleted scene and an alternate ending. These were previously on DVD only in the Fox Blu-ray+DVD release so this is the first time these supplements are on Blu-ray.

To Live and Die in L.A. (Collector’s Edition) [Blu-ray]