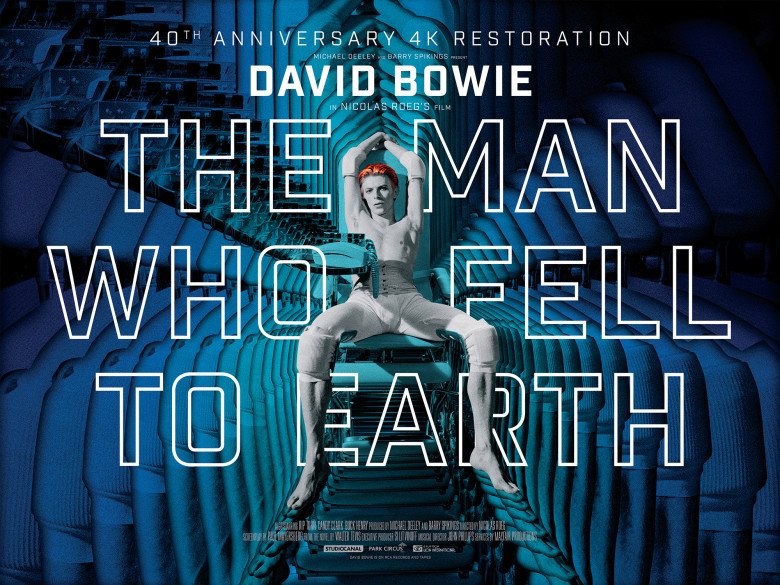 I try to keep up on the most interesting releases on Blu-ray and DVD but I don’t have the time to cover everything in the detail it deserves. Here are some of the special editions and stand-out releases that have come out over the past few weeks.

The Man Who Fell To Earth (Lionsgate, Blu-ray), Nicolas Roeg’s trippy 1976 take on science fiction, turns an allegorical Walter Tevis novel into a surreal meditation on an alien and alienating culture. David Bowie is used as much for his androgynous pop-star persona as for his spindly frame and striking, angular face, a true stranger in a strange land. As his character, a space traveler on a mission to Earth for the sake of dying planet, becomes seduced by sex, alcohol, and the media, his life is destroyed from without by what must be American agents. Roeg suggests more than he states, but through an accumulation of seemingly disconnected details he recreates our world as a disorienting, alien landscape. The equally offbeat cast includes Candy Clark as his girlfriend, Buck Henry (behind marvelous fish-eye glasses) as the patent lawyer who helps the alien build his fortune, and Rip Torn as a womanizing college professor who gives up teaching (and seducing his students) to join his hero.

The film has previously been on Blu-ray from Criterion (the 2008 edition is long out of print). The new three-disc set from Lionsgate is mastered from a new 4K restoration from Studio Canal and includes supplements new to American home video. There are new video interviews with costume designer May Routh (15 minutes), production stills photographer David James (9 minutes), and filmmaker Sam Taylor-Johnson (12 mins), plus the featurette “The Lost Soundtracks” (17 mins). From the Anchor Bay DVD is the 25-minute featurette “Watching the Alien” with the cast and crew (25 mins), there are substantial archival interviews with director Nicolas Roeg (33 minutes), actress Candy Clark (28 mins), screenwriter Paul Mayersberg (32 mins), and cinematographer Tony Richmond (22 mins), and a clip from 1977 French TV featuring David Bowie discussing the film (9 mins). Also includes a CD soundtrack, a 70-page booklet, and artwork.

Jerry Maguire: 20th Anniversary Edition (Sony, Blu-ray) – Cameron Crowe guides Tom Cruise through one of his best performances as a sports agent whose career is forever changed by a sleepless night and an attack of conscience that leads to a “mission statement” that makes him both hero and has-been, and pulls Renee Zellweger from bit parts to become the socially clumsy, unlucky at love single mom whose idealism is recharged by Cruise’s stand. But the film is not about taking a stand, but trying to live by it when the hard light of day blows the late night idealism away, and that’s where Cruise’s confidence and cockiness reveals itself as a brittle armor over a soul searching for redemption, and terrified of it when he starts to get close. Cuba Gooding Jr., whose equally cocky football pro is Cruise’s only client, brings an underlying warmth to the film as a devoted Dad. He practically reprised his gridiron joy of living celebration when he accepted his Oscar for Best Supporting Actor. Bonny Hunt shows her unerring instincts for human comedy as Zellweger’s guardian angel sister, Kelly Preston is perfectly mercenary as Cruise’s power girlfriend, and Jerry O’Connell, Jay Mohr, and Beau Bridges co-star.

The new special edition features a new 4K master and you can see the improvement in color and clarity. New to this edition is the 39-minute retrospective documentary “Jerry Maguire: We Meet Again” narrated by Cameron Crowe, nearly an hour of deleted and extended scenes, and a new stills gallery. Carried over from the previous releases are picture-in-picture video commentary by director Cameron Crowe and stars Tom Cruise (his first ever), Renee Zellweger, and Cuba Gooding Jr., two minutes of rehearsal footage with optional commentary by Crowe and the editor, a “Rod Tidwell” commercial starring Cuba Gooding Jr., an seven-minute behind-the-scenes featurette, the four-minute “How to Be a Sports Agent” featuring real life agent Drew Rosenhaus, and a Bruce Springsteen music video. Also includes a booklet with Jerry Maguire’s “mission statement,” a CD soundtrack, and an Ultraviolet Digital HD copy of the film.

xXx: 15th Anniversary Edition (Sony, Blu-ray) – Vin Diesel, all pumped up and tattooed out, plays the Gen-XXX upstart secret agent coerced into service in this glitzy attempt to reinvent the international super spy for a new generation weaned on video games and extreme sports. Less a rebel than a big boy scout working for the ultimate merit badge with unconventional tactics, Diesel invests his extreme sports rebel turned unconventional spy with a hearty embrace of life, while Samuel Jackson (with a nasty facial scar and a butt-ugly haircut) has fun as his bad-ass NSA boss. Asia Argento pouts from under junkie-chic dark eyes as the sneering Euro-chick bad girl. Director Rob Cohen serendipitously tapped into the zeitgeist of youth culture with The Fast and the Furious. He just misses the vein here, but he delivers set piece spectacles with all the requisite noise and epic property damage, and turns Prague into one giant Goth club. Momentum, motivation, and story are all swallowed by pure sensation, but Diesel looks like he’s having a blast on screen, and his gusto is infectious.

Dirty Dancing: 30th Anniversary Edition (Lionsgate, Blu-ray) – “Nobody puts Baby in the corner!” Part nostalgia, part sexy dance film, and all ugly-duckling romance, the hit date film of 1987 stars Patrick Swayze as a working class guy who teaches dance at a Catskills resort in the early 1960s. Jennifer Grey is Baby, the younger sister in an affluent family who, always in her sister’s shadow, discovers the naughty allure of dirty dancing when she hangs with the help at the resort and falls for the older instructor, who has a passion for dance that softens his tough exterior. Actors Patrick Swayze and Jerry Orbach and director Emile Ardolino have since passed away.

Hellraiser: Scarlet Box (Arrow, Blu-ray) – Clive Barker’s original Hellraiser (1987) and the first two sequels (in a series that ultimately numbered nine installments with a tenth on the way) are collected in this deluxe four-disc set from Arrow. Horror novelist Barker directs Hellraiser (1987), adapted from his novella “The Hellbound Heart,” a low-budget production about a mysterious puzzle box (called the Lament Configuration) that unleashes demons from another dimension (known as the Cenobites) that feed off the pain they inflict on humans. Even darker than the gory fantastic elements are the increasingly cruel actions of a tormented victim and his former lover to bring him back to life by sacrificing other victims. It became a cult film for the way it reimagined the way demons and monsters were visualized and brought a more primal intersection of sex and horror to film, and a sequel was quickly put into production. Hellbound: Hellraiser II (1988), written by Barker and directed by Tony Randel, follows Kirsty (Ashley Laurance), the teenage survivor of the horrors, in an asylum run by a doctor determined to open the box for his own masochistic pleasure, and as the title promises it opens the gates to hell. In Hellraiser III: Hell on Earth (1992), the least interesting of the three, the film’s poster child Pinhead (Doug Bradley) takes the lead as the villain who unleashes his fellow Cenobites on Earth. They may not be classics but they are cult films and the original is still a mind-screw of a movie.

All three films, which have been available in multiple versions on home video over the years, are newly remastered from 2K restorations for this set. New to this collection are the feature-length documentaries Leviathan: The Story of Hellraiser (90 mins), Leviathan: The Story of Hellbound: Hellraiser II (90 mins), and The Story of Hellraiser III (90 mins), all previously available only on the European discs, plus the alternate unrated version of Hellraiser III, commentary on Hellraiser III by writer Peter Atkins, and an interview with actress Paula Marshall. Multiple commentary tracks are carried over from previous releases: Hellraiser features one with writer/director Clive Barker and one with Barker and actress Ashley Laurence, Hellbound features one with director Tony Randel and writer Peter Atkins and one with Randel, Atkins and actress Ashley Laurence, and Hellraiser III features director Anthony Hickox and Doug Bradley. There are archival documentaries and interviews carried over from previous releases and a fourth disc exclusive to the limited edition features Clive Barker’s early underground short films Salomé and The Forbidden, the documentaries Hellraiser: Evolutions (48 mins) and Books of Blood & Beyond: The Literary Works of Clive Barker (19 mins), and the short film The Hellraiser Chronicles: A Question of Faith. Also in the limited edition box set is a 200-page hardbound booklet.

At Midnight I’ll Take Your Soul (Synapse, DVD)
This Night I’ll Possess Your Corpse (Synapse, DVD)
Jose Mojica Marins’ creation Ze do Caixao (Jose of the Grave), known to English speakers as Coffin Joe, is described by Marins biographer Andre Barcinski as a “national bogeyman” in his native Brazil. That hardly captures this darkly fascinating mix of Dracula, demon, and Nietzschean superman, a black hatted bully, misogynist, and gleefully sadistic murderer as folk hero. In Coffin Joe’s startling, controversial debut At Midnight I’ll Take Your Soul (1963), Brazil’s first true horror film, Marins shocked the Catholic country with a blaspheming anti-hero. The imagery is bold and genuinely startling: he ties up his wife and watches a tarantula crawl up her wriggling body (“It was a great show” he cackles as she dies), severs the fingers of a poker player with a broken bottle, and clubs then drowns his best friend. As John Carpenter insists, “you can’t kill the bogeyman,” and so Joe’s death at the end was greatly exaggerated: he returns in the sequel This Night I’ll Possess Your Corpse (1966), still on a mission to find the perfect woman to bear his son. He puts his subjects through a series of torturous tests and dumps the losers in a snake pit, and finds himself dragged down into the pits hell in a lurid, surreal color sequence.

Previously available on DVD from Fantoma, it gets a new release (on DVD only) in editions remastered from the original 35mm negatives, featuring the interviews and introductions with Marins recorded for the original DVD releases, plus new featurettes and interviews. All in Portuguese with English subtitles.