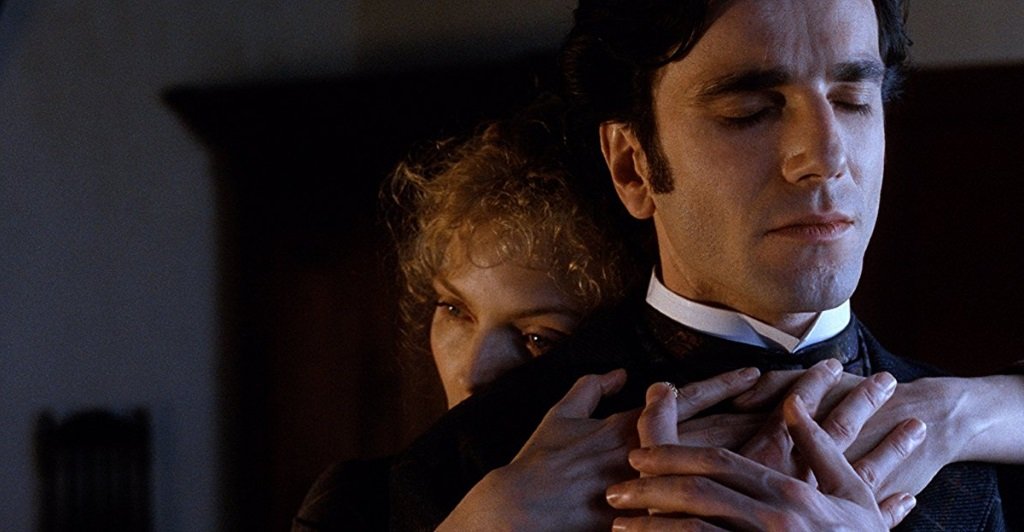 The Age of Innocence (1993) is not the only costume drama or historical picture that Martin Scorsese made but it is the only classical literary adaptation from the filmmaker that, all these years later, we still remember for edgy violence and cinematic energy. But even from the director of The Last Temptation of Christ, Kundun, and Silence, this film stands out for its grace and nuance in its portrait of social intercourse as formal ritual.

Adapted from Edith Wharton’s novel by Jay Cocks and Scorsese and set in 19th century New York City, it stars Daniel Day-Lewis as Newland Archer, a respected lawyer and respectable member of elite society who is engaged to the beautiful young May (Winona Ryder) but falls in love with her cousin, the worldly Countess Ellen Olenska (Michelle Pfeiffer). The American-born Ellen has spent the best years of her life in the social straightjacket of the European aristocracy and arrives home a stranger under the shadow of scandal, fleeing a bad marriage to a philandering European Count. At first Newland extends his friendship out of duty to May but soon finds Ellen’s honesty and insight refreshing and exciting. As he observes how his own society marks her as outcast he starts to see his own complicity in a social world just as petty and judgmental as the one Ellen has fled. That very complicity puts him at odds with his passions when he’s instructed to talk Ellen out of divorcing her husband and into returning to a loveless marriage to avoid tarnishing the family name. The same contract that he realizes he too will entering.

Admirers have suggested the film’s presentation of the ruthless rules of conduct and unforgiving rejection of all who defy it as a companion to the more volatile and physical codes of his gangster movies. Scorsese himself has talked about it (see the interviews accompanying the Criterion disc) but I you can only press the point so far. I see Scorsese drawing from his love of Max Ophuls and Luchino Visconti in his attention to social form and the straightjacket of society, and of course paying tribute to The Magnificent Ambersons in the opening scenes. As his camera carries us on a guided tour through the opening of the social season, where being seen at the opera is more important than anything presented on stage, Joanne Woodward offers deft commentary in voice-over, not narrating so much as contextualizing the ritualized demands and expectations of public presentation and offering background on the dramatis personae. Woodward’s beautifully understated delivery of the witty lessons in social decorum offer sharp counterpoint to the burnished surfaces and crisp manners.

Day-Lewis is superb as the idealist only aware of his complicity when he sees it refracted through the experience of Ellen, who has no devotion to society’s rules and no respect for such demands for appearances. But if he conforms out of routine, a dance to which all he knows all the steps, May does so blindly, as if she doesn’t realize it is a choice. Newland sees May as pure and innocent but soon realizes that she is a creature of the culture, beholden to all the prejudices of her social standing. Ryder straddles that line beautifully in her performance, projecting an earnest naïveté while ruthlessly playing social games to control Newland. Pfeiffer’s delicate portrayal is powerful and layered, revealing a woman who has been betrayed and knocked around by life but doesn’t let her bruises show. The continental cadences of her English and the very way she moves through this world, careful yet uncalculated, sets her apart from this society where appearances are all, and the hope and idealism projected in the dazzling blue eyes and bright smiles of the early scenes are lost as she’s resigned to disappointment in this world later in the film.

The Age of Innocence is a magnificent piece of filmmaking, rich and textured and at times lovingly mannered as Scorsese appropriates and integrates silent movie devices into his yesteryear portrait. In the opening scenes, as society busybody Larry Lefferts (Richard E. Grant) surveys the opening night audience through opera glasses, Scorsese replaces a conventional pan with a flicker of images, suggesting both the effect of eyes moving across the crowds, briefly alighting on one spot then jumping to the next, and magic lantern shows, which dissolve from one image to another.

I call it Scorsese’s American answer to The Rules of the Game, where the New York aristocracy ruthlessly polices those rules. It is a cutting, damning portrait of a society that judges people by position, family, reputation, and adherence to the finer point of social form. Conversation is verbal fencing, a social sport that can tumble into sparring or even combat as they a duel over what they mean but never actually say, the brutal subtext under the volleys of polite words. The demand for form above all else, including happiness and truth, is toxic, a prison of conformity imposed by the prisoners themselves, yet what could have become Ophuls-ian tragedy is presented with more complexity. It’s one of Scorsese’s greatest films, and one of his most overlooked, perhaps because it doesn’t obviously play to the strengths we most admire in Scorsese. I hope the Criterion release will help audiences discover it anew.

Leaves Hulu at the end of January. Add to My Stuff on Hulu

, iTunes, GooglePlay and/or other services. Availability may vary by service.
The Age of Innocence [Criterion Blu-ray]

The Age of Innocence [Criterion DVD]

It has been newly mastered by Criterion for its Blu-ray debut and new DVD edition from a 4K digital transfer of the original 35mm camera negative and color graded approved by Scorsese and editor Thelma Schoonmaker. It is gorgeous, with a golden glow to the rich palette.

This edition features substantial new interviews and an archival featurette. In the 23-minute interview with director Martin Scorsese, conducted by Kent Jones, he discusses his history with period costume dramas and cites the films of Albert Lewin and Max Ophuls and particularly William Wyler’s The Heiress as primary inspirations on his approach. There are also new interviews with screenwriter Jay Cocks (23 mins), production designer Dante Ferretti (19 mins), and costume designer Gabriella Pescucci (19 mins), the latter two in Italian with English subtitles. The archival “Innocence and Experience: The Making of The Age of Innocence” is a terrific 23-minute behind-the-scenes featurette made for HBO in 1993 that features clips from a conversation between Scorsese and Day-Lewis and interviews with Michelle Pfeiffer, Winona Ryder, producer Barbara De Fina, film editor Thelma Schoonmaker, director of photography Michael Ballhaus, and others.