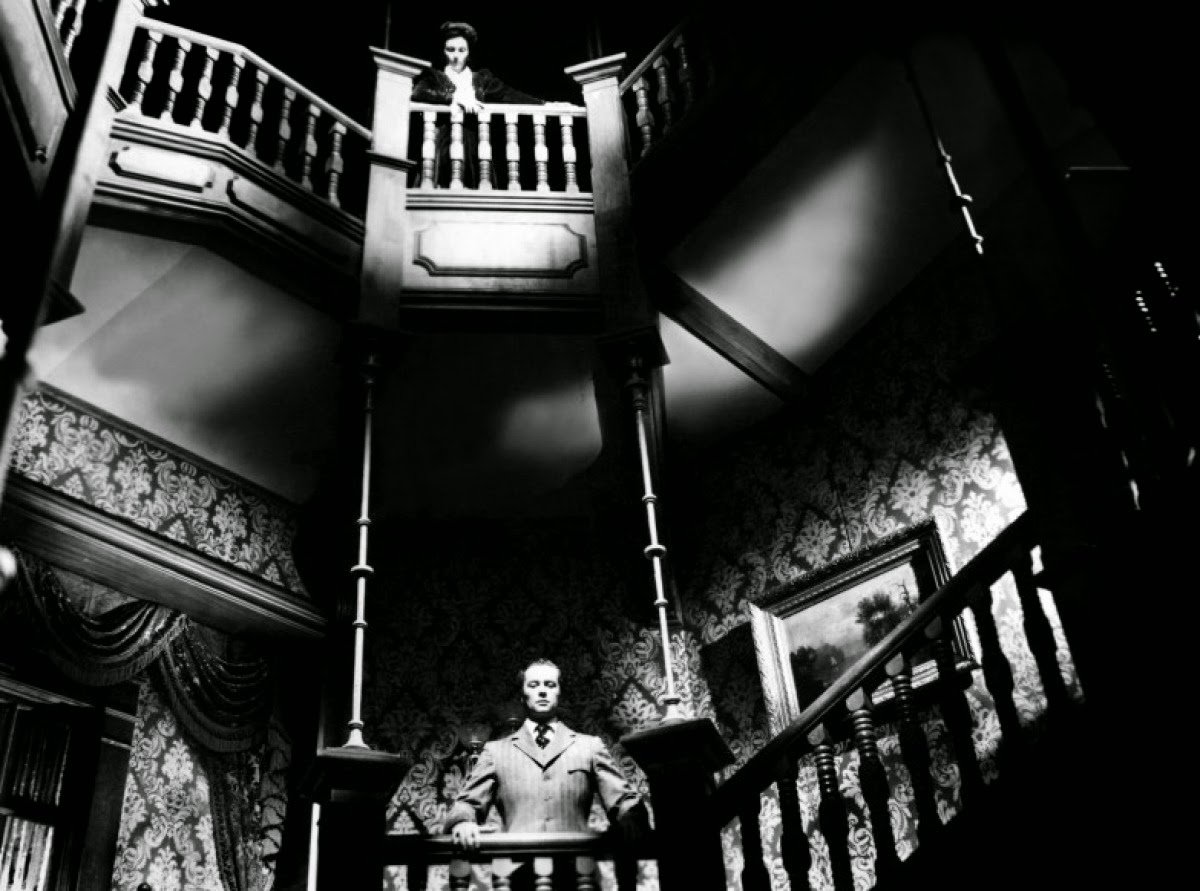 How did it take so long for the sophomore feature from Orson Welles to finally get its Blu-ray debut?

I don’t need an answer, I’m just thrilled that it’s finally here, and in such a beautiful edition.

The magnificence of The Magnificent Ambersons (1942) is apparent from the first frames of the film. Welles sketches a vivid, idealized portrait of American life in the late 19th century in a brilliant montage that sets the time, the place, and the culture in a series of postcard images and comic snapshots. While Welles narrates (in his glorious authorial voice with an understated warmth and familiarity) the changes in fashion through the years,the images introduce hopeful suitor Eugene Morgan (Joseph Cotten in his star-making performance) and disappointed heiress Isabel Amberson (Dolores Costello) and Welles effortlessly segues from exposition to story. The mix of silent movie-like compositions and imagery, striking montage, and radio drama narrative that introduces the world eases into a graceful, glorious long take that sweeps us into the “now” of the story: a ball at the Amberson Mansion, a place frozen in the past of those opening scenes, where social convention and grandeur are upheld for no reason other than tradition. It is beautiful, a portrait of wealth and culture out of touch with the world outside, and unconcerned with it. At its peril. Just as the fashions and conventions of society constantly evolved in those early montage sequences, so does industry and culture and life itself in the upheaval of progress in the 20th century.

Adapted from the novel by Booth Tarkington, the second feature by Orson Welles tells the story of a wealthy family that holds a position akin to aristocracy but loses position, power, and wealth as it fails to evolve with the times. Cotten’s Eugene Morgan is an automobile inventor who helps transform the American city with his creation even as he mourns the loss of the past. Isabel, the love of his life, rejects Eugene over a social gaffe, marries a dull husband, and spoils her son George (Tim Holt), who grows into a shallow young man so obsessed with convention and reputation that he sacrifices the happiness of himself and his mother. Holt is odd casting as George, a cowboy actor out of his depth among the stage-trained stars, and while his lack of dimension seems appropriate to the glib, spoiled young man raised in wealth and power without responsibility and shielded from consequences, he is unable to suggest more than just the surface of a character. Even as Anne Baxter, who plays Lucy, Eugene’s daughter and the young woman Eugene loves, suggests a complicated set of feelings behind a sunny smile and shows a sophisticated understanding of social faces, Holt is pure impulsive child in ways that deny the deep-seeded emotions that drive his actions. Except when performing opposite Agnes Moorehead, who plays his Aunt Fanny. Fanny loved Eugene as well but has never been more than a dear old friend and her pain finally erupts in a poisoned rant that drives George to drastic, tragic action. Moorehead is not simply brilliant in the film—she earned an Oscar nomination for her performance—she brings out the best in Holt.

The Magnificent Ambersons is both an evolution of the storytelling from his debut feature, Citizen Kane, and a counterpoint to the dense narrative and complex storytelling devices. There’s a grace and elegance in his direction here, an evocation of a slower pace of life and the romance of the perceived innocence of past eras. But as Eugene proclaims with a smile, little realizing that he is diagnosing the fatal flaw of the grand Amberson legacy: “There aren’t any old times. When times are gone, they’re not old, they’re dead. There aren’t any times but new times.”

Where Citizen Kane explored the urban world of power in the age of mass communication with filmmaking that reflected a world that never rested, Ambersons offers storytelling like dance, a narrative that moves like music, and Welles appropriates imagery and techniques from silent movies to capture the era. The first shot of the film, with the trolley stopping in front of the house as a woman calls out from an upstairs window, has the quality of a 19th century Lumiere Bros. actuality. Not just the composition (which also recalls a Currier and Ives print) but the action of the men stepping off the horse-drawn trolley to help get it back on the tracks and then climbing back in, moving at a slightly “off” speed, like a silent film sped up ever so slightly. Where Welles created bold, dynamic, dramatic images for Kane, putting his visual insight and theatrical showmanship up front, he takes a subtler approach in Ambersons. Wealth and class sets the Ambersons apart from the rest of the town, their mansion easily the most grandiose edifice in the town, a monument to old wealth in a changing world. Wesee the town grow and evolve through the decades in the background of long takes of horse and buggy rides, car drives, and slow walks down the street, an unforced way of showing the passing of time even as the characters never seem to age (Costello never convinces as the young heiress and Cotten ages through stage make-up yet seems ever youthful, fittingly given his embrace of life and forward-looking nature).

As anyone familiar with the legacy of Orson Welles knows,the film was taken from his hands and radically cut down by RKO; over 40 minutes of footage from a film that originally ran 130 minutes. The studio interference begins in the first hour but is really most profoundly felt in the final half hour, where the easy, gentle flow from scene to scene becomes choppy, a consequence of the hacking of scenes and sequences by the studio that no editing oversight can cover. Individual scenes are still beautiful (the two scenes shot by Robert Wise jump out stylistically but are adequate) but the rhythm is destroyed. Those scenes no longer exist; the studio destroyed Welles’original cut and all of the negatives of the footage in their possession and hopes of any restoration or reconstruction of his original vision are slim at best. But make no mistake, while the film is justifiably branded a compromised masterpiece, is nonetheless remains a masterpiece even in compromised form. It is an emotionally rich family saga and a masterful elegy for a bygone chapter of American life, both a celebration of a way of life lost in the modern world and a critique of the idealization of that life represented by the American aristocracy of the Ambersons.

The film was added to the National Film Registry in 1991.

Criterion’s special edition DVD and Blu-ray debut of The Magnificent Ambersons is mastered in 4K from a 35mm fine-grain print preserved by the Museum of Modern Art. I’ve never before seen a presentation of this film this beautiful and the clarity reveals details I’ve never noticed before. The extended prologue, which so beautifully and subtly transforms from commentary into narrative, is presented with a soft focus ring around the edge of the frame that adds to the idealized evocation of the past, suggesting both the era of silent cinema and early photography and the dreamy mist of memory. The presentation looks flawless throughout, the image crisp and clean in those gliding long takes and deep focus shots, with a rich gray scale that adds to the sense of depth in the amazing scenes in the cluttered Amberson Mansion.

Criterion released the film on laserdisc in 1985 with commentary by Orson Welles historian Robert Carringer, who chronicles the history of the production and the changes that were imposed on the film when Welles left Hollywood for a project in Brazil. That track is included here along with a new commentary track by two additional esteemed Welles experts, James Naremore and Jonathan Rosenbaum, who bring their own take to Welles’ history with RKO.

Produced for this release are interviews with Welles biographer Simon Callow, who offers a take on the production history of the film that blames Welles for much of the film’s troubles (25 minutes), and film historian Joseph McBride, who offers a more sympathetic portrait of Welles in Brazil and the changes at RKO that led to the cutting of the film (29 mins);the video essay “The Cinematographers” by Welles scholar Francois Thomas that analyzes the imagery of the film and parses the work of credited cinematographer Stanley Cortez from the uncredited contributions by Russell Metty and others (15 mins); and video essay “The Score” by Bernard Herrmann scholar Christopher Husted (19 mins).

Archival supplements include Orson Welles as a featured guest on The Dick Cavett Show from May 14, 1970 (with Jack Lemmon), telling stories as if holding court (and embellishing the truth to lesser or greater extent in most cases) (36 mins); a 25-minute segment from the 1925 silent film Pampered Youth, the first screen adaptation of The Magnificent Ambersons; two radio plays adapted from the works of Tarkington by Orson Welles for “The Mercury Theater of the Air”: “Seventeen” (1938) and “The Magnificent Ambersons” (1939), featuring Welles in the role of George Minafer (both run close to an hour long); and audio excepts from Peter Bogdanovich’s interviews with Welles (36 mins), plus a vintage trailer.

Disc provided by The Criterion Collection for review purposes.