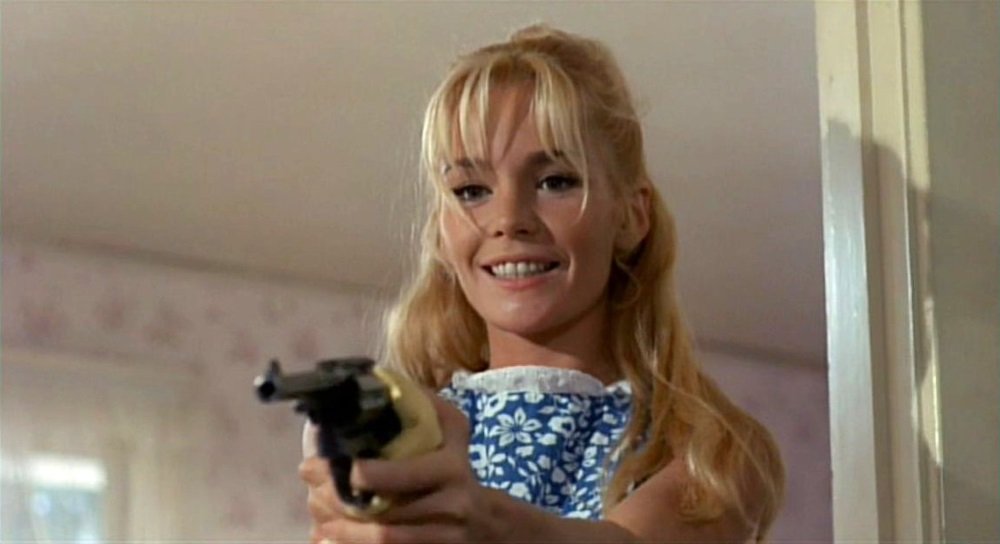 Pretty Poison (Twilight Time, Blu-ray) (1968) begins as a kind of Walter Mitty or Billy Liar, with Anthony Perkins as a mentally unstable young man released from psychiatric confinement and let loose into society where he plays spy games like a big kid in an adult world. While he’s not entirely harmless (his fantasies already led him to arson as a teenager and a vindictive streak leads to a little industrial sabotage), he’s an innocent compared to his new high school sweetie (Tuesday Weld, all blond bounce and wide-eyed excitability).

Call it Bobby sox noir. He’s an older guy, to be sure, and she’s a beautiful high school majorette seemingly charmed by his secretive life and acronym-dotted small talk, but behind her schoolgirl smile is a cagey, bored girl with a sociopathic streak who finds in Perkins an outlet for her darker fantasies. As he concocts “missions” for her, she works this goofy naïf like a pro, proving to be a far better (and certainly more cold-blooded) secret agent than he is.

“The world is no place for fantasies,” his probation officer warns him, and she’s the biggest fantasy of all. Weld plays the wild child as teenage femme fatale with a feral edge to her bright-eyed grin. Perkins, meanwhile, reveals a fragile sensitivity and vulnerability behind his front of double lives. His emotionally-stunted big kid is all intelligence and no experience, essentially raised in captivity and bored stiff with his factory job now that he’s been let loose. His fantasy life becomes his only outlet and Perkins grounds the dark satire with a quiet heartbreak and disillusionment with how the real world is far crueler than the made-up conspiracies of his Cold War spy games. He accepts the role of patsy with a mix of chivalry and resignation.

Director Noel Black underplays the more caustic edges of Lorenzo Semple Jr.’s script even as he foregrounds the poison pouring (quite literally) through this dreary little small town. Black keeps the colors muted, as if the workaday dullness and lack of imagination has drained this place of life.