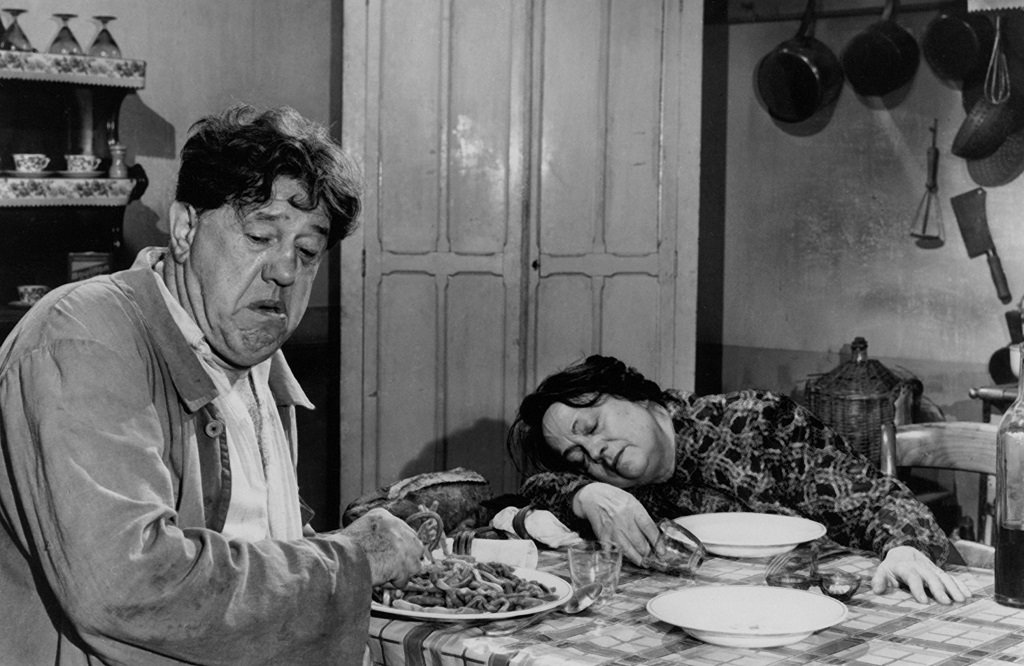 Actor, director, and playwright Sacha Guitry was a giant of French cinema as writer, director, and star of a series of witty and inventive movies from the 1930s through the 1950s. For his weirdly exuberant black comedy La Poison (1951) he gives the lead to the great Michel Simon, who plays a gruff bear of a gardener who has come to hate his wife of 30 years and plots her murder while she (Germaine Reuver) plots his. When he hears a radio interview with a lawyer (Jacques Varennes) celebrating his hundredth successful acquittal, he uses the lawyer to (unwittingly) guide him through the perfect murder. Perfection here is a matter of degree, of course. He doesn’t mind being caught. He just wants to remain free to enjoy his life as a merry widower.

Guitry’s cinematic invention is less visual than narrative. He has a flair of creative storytelling and verbal dexterity and most of his films are energized by his presence in the leading role. While Guitry is not the in film itself, he personally introduces the cast and crew like a master of ceremonies in the memorable credit sequence, then steps back and lets his witty dialogue and creative storytelling techniques speak for him. The radio broadcasts commentary and counterpoint to their wordless meals together, for instance, an effusively romantic song as their body language suggests suppressed violent impulses followed by a radio play of bickering spouses voicing their internalized feelings.

Simon plays the bearish, boorish Paul with a hangdog resignation that turns to energetic gusto when he hatches his plan, becoming more animated and confident with ever scene, like a showman feeding off the attention of his appreciative audience. Reuyer has no such opportunity to bring anything similar to his wife beyond the easy comedy of her frumpy manner and shuffling movements. She’s less a character than a narrative device, the ultimate battle axe who can’t even commit to pulling out that rat poison she’s stashed in the cupboard. That’s not to say that Paul is in any way justified but he’s certainly entertaining and even likable in a perverse way, whereas his wife is a horror completely disconnected from everyone in the village. She’s got no one on her side, not even the director.

Guitry was accused of collaboration and imprisoned before the charges were dismissed and carried a grudge for years. This is his most cynical and savage commentary on the moral compass of France after the war, a black comedy of a poisonous marriage and a scabrous satire of small town gossip, morality, raging misogyny, and mercenary self-interest, and not just Paul’s murderous solution to marital misery. The townsfolk, struggling with economic stagnation, decide that the best way to attract tourists is to order up a miracle from their priest. The murder, and notoriety that comes with it, is in a perverse way the answer to their prayers and they are duly grateful. The blackly comic piece of theater plays in the courtroom (where Paul’s ego takes over and he starts lecturing the court) and on the streets (where the children play out the murder and the trial in their games). It is Guitry’s theater of the absurd in the moral vacuum that he sees in post-war France, a ferociously, gleefully barbed comedy that is ultimately darker than even the most doomed French noirs of the era.

Criterion presents the American DVD and Blu-ray debuts of the film in a new digital restoration that is richer and cleaner than the early Guitry films released a few years agot in the Eclipse box set. This edition features a new 16-minute interview with filmmaker Olivier Assayas discussing the influence of director Sacha Guitry and a 2010 documentary on the collaboration of Guitry and actor Michel Simon originally made for French TV.
La poison (The Criterion Collection) [Blu-ray]