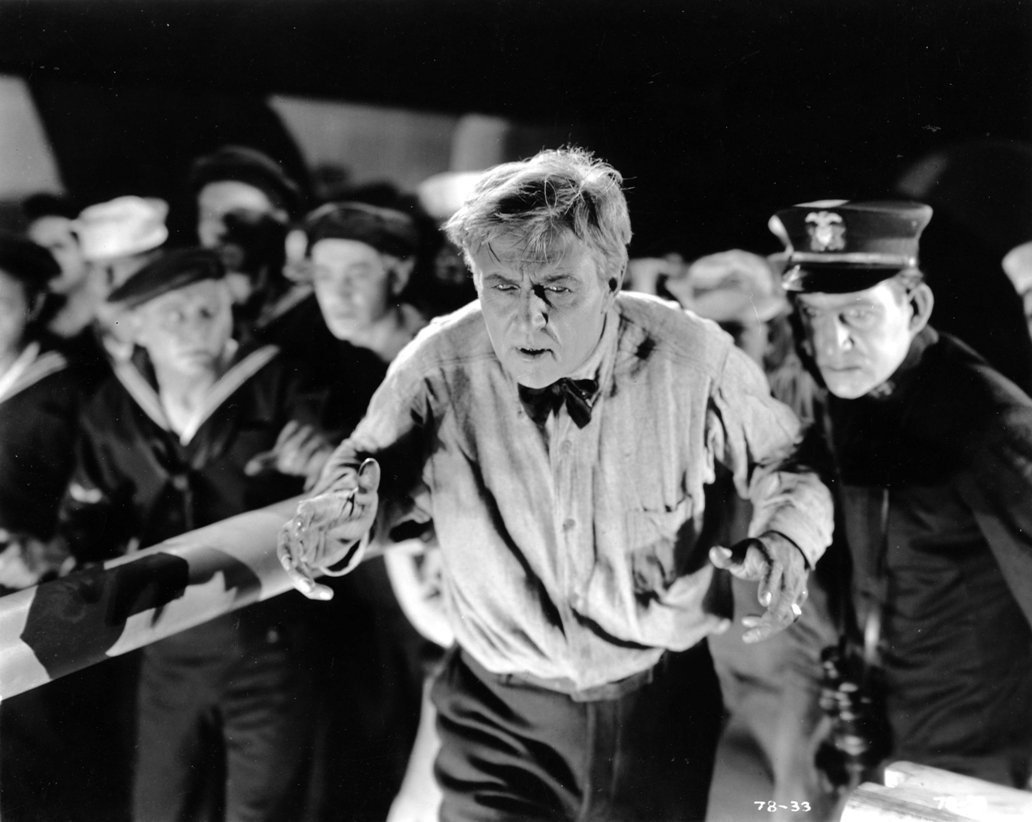 Behind the Door (1919) (Flicker Alley, Blu-ray+DVD) was for decades a film known by reputation only. A good film, yes, but more than that a notorious one, for what lay behind the door was… No spoilers because the film, once known to exist only in incomplete form, has been reconstructed and restored by the San Francisco Silent Film Festival and released on disc by Flicker Alley. Its reputation proves well-earned.

Hobart Bosworth plays Captain Oscar Krug, an American seaman of German ancestry who left the sea for life ashore for the love of a woman. But in the opening moments of the film he’s a haunted man returning to the ghosts of the past in his old taxidermy shop, now a ransacked ruin choked by dust and shadow. His story plays out in the shadow of this resignation, a sunnier time when he was in love with banker’s daughter Alice (Jane Novak) and respected by his New England community. A jealous suitor uses the outbreak of World War I to whip up anti-German hysteria (which, in 1919, was not that distant a memory) but the two-fisted patriot wins over the mob with a roundhouse of a brawl and a rousing proclamation to do his duty, as every American should. He bonds with his opponent, McTavish (James Gordon), over the brawl and a few cuts later Krug is captaining an American naval ship, the Perth, with McTavish as his loyal mate and friend. And Alice stows aboard, kicked out by her possibly-crooked, definitely-shady banker father, ready to do her duty as a nurse. Then the unmistakable conning tower of a submarine rises from the surface of the sea and German U-boat commander Brandt (Wallace Beery) torpedoes and sinks the Perth with far too much malicious glee. If director Irvin Willat makes a point of celebrating the patriotism of German-Americans, he brands the German enemy with the familiar stereotype of the bloodthirsty Hun.

The rest of the story is best discovered on your own because it’s a doozy of a portrait of war crimes and gruesome revenge. I’ve not seen any of Willat’s other pictures (he continued directing through the 1930s) but his direction here is impressive. Even by the standards of silent movie fight scenes the brutality of this graceless but furious free-for-all is startling; by the time it’s over, both Krug and McTavish are streaming blood from nose and mouth. Even more shocking is Brandt’s treatment of a captive woman (a “mermaid” fished from the sea) as spoils of war, using her until he’s sated and then tossing her to his sex-starved crew. She’s swallowed by the leering, animalistic mob as they literally swarm over her while a smirking Brandt shuts the door on the assault. This is the first instance of Willat making abundantly clear exactly what’s behind those doors without actually showing anything. He lets the imaginations of the audience complete the picture.

Beery is a classic smiling sadist and a familiar portrait of the Prussian officer from American movies of the war era (a part that Erich von Stroheim perfected during the war years). Bosworth, who was 52 at the time, has a more internal intensity that erupts in the first act brawl and in the final act as he unleashes his revenge on Brandt. His torment while playing a sympathizer to coax a confession out of Brandt tends to the melodramatic, a kind of Jekyll and Hyde that switches up whenever he turns his head to tamp down his rage and recompose himself, but this isn’t trying to be a paragon of realism. By the end of the film, Bosworth’s Krug has had the compassion beaten out of him and his wobbly grasp on himself as he confesses all to his suspicious mates is deeply affecting and feels remarkably modern.

As recounted in the restoration featurette and accompanying booklet, the film was restored from three different sources and guided by the film’s original cutting continuity. Two short sequences and many intertitles remain lost. The imagery of the missing footage is recreated with stills and the lost subtitles are recreated in the style of the film and identified with a 2016 date. A couple of additional short sequences are marred by nitrate damage bubbling down the center of the image. The rest of the restoration looks remarkably good, and it has been tinted and toned to match the original release.

Stephen Horne’s piano score is quite lovely, more modern and delicate than you might expect from such a dramatic film, and he adds in flute, accordion, glockenspiel, and at one point the strummed strings of his piano for effect. Though they have been recorded separately for this recording, I saw Horne perform the score live and play the instruments simultaneously.

Also on Blu-ray+DVD Dual Format release from Flicker Alley and on SVOD through Flicker Alley’s website. Availability may vary by service.
Behind the Door [Blu-ray/DVD Dual-Format]

The two disc set features Blu-ray and DVD editions of the film and the supplements. “Kevin Brownlow: Remembering Irvin Willat” is a new 31-minute interview with the esteemed film historian, who discusses Willat’s life and career and shares his personal experiences with Willat, who he got to know when he interviewed him in the late 1960s. The 11-minutes featurette “Restoring Irvin Willat’s Behind the Door” is a guide through the process of tracking down the footage and reconstructing the film from the pieces with Robert Byrne, who produced the restoration, and Seth Miller and Anna Marie Smatla, who were members of the restoration team. Also includes an accompanying booklet with essays by historian Jay Weissberg, restoration producer Robert Byrne, and composer Stephen Horne.