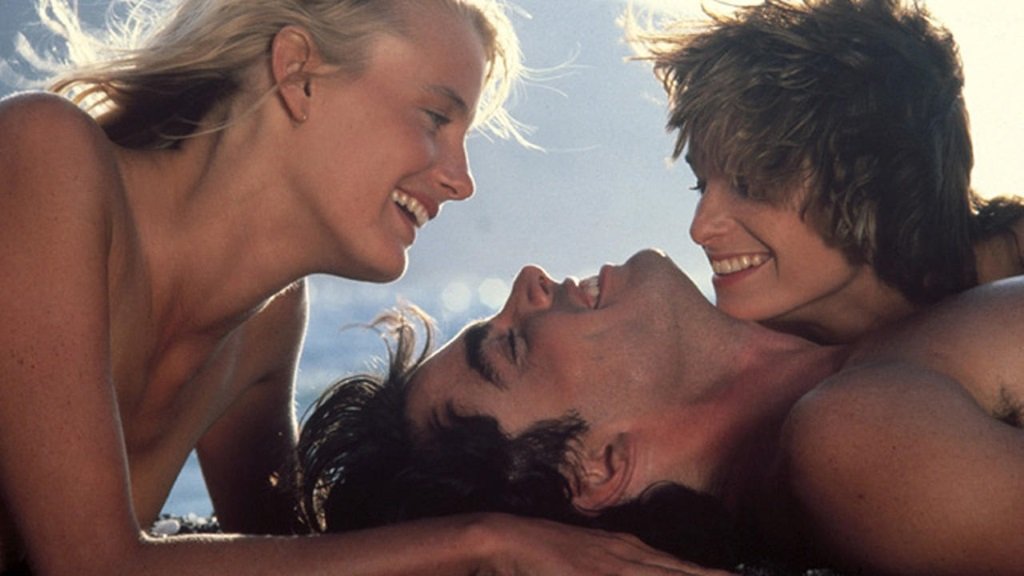 Summer Lovers (Twilight Time, Blu-ray), the sexy 1982 tale of Americans in Greece learning to shed their inhibitions, is not your usual eighties sex romp. Written and directed by Randall Kleiser, riding high after Grease (1978) and The Blue Lagoon (1980), the film takes an adult look at love, sex, and modern romance in the uninhibited world of the Greek islands.

Peter Gallagher and Daryl Hannah are Michael and Cathy, the American couple trying to rejuvenate their stalled romance with sun and sex—they have the good sense to avoid the American tourist hub and get a villa in a much more international neighborhood. Within a week the initially inhibited couple is skinny-dipping with the Europeans, and not long after than Michael’s restless libido connects with a free-spirited French girl, Lina (Valérie Quennessen) and a one-night-stand unexpectedly becomes a ménage-a trois, with all three sharing a bed.

Kleiser freely displays the unclothed bodies of his attractive cast and his scores of extras (more female than male nudity, to be sure, but he casts well-toned and tanned bodies throughout) but what’s interesting is his presentation of the emotional and physical intimacy of the couple. He’s a little ambivalent on the physical relationship between the women (I guess that was a sexual hang-up too far for an American studio film in 1982) but the body language and physical relationship suggests a connection beyond “just good friends” and at times Michael is more like a shared boy toy than an equal partner. Those nuances make the relationship much more interesting, and thankfully Kleiser resists falling back on conventional notions of morality as jealousy and possessiveness invades their equilibrium. The rest is a sunny, sexy romp through an endless summer of uninhibited intimacy, a travelogue for young adults looking to lose themselves in a decidedly continental approach to romance and intimacy.

Another gorgeous transfer from Twilight Time. While they are often at the mercy of the studios when it comes to digital masters, Kleiser is a friend of the Twilight Time founders and they made sure this was a crisp, clean, lush-looking disc. All the sun-kissed beauty of the sand and surf and ageless landscape of Greece, as well as the attractive bodies, comes through vividly.

Features new commentary by filmmaker Randall Kleiser recorded for this release, the vintage EPK featurette “The Making of Summer Lovers,” screen tests, and the 1997 documentary “Basil Poledouris: His Life and Music,” on the film’s composer.