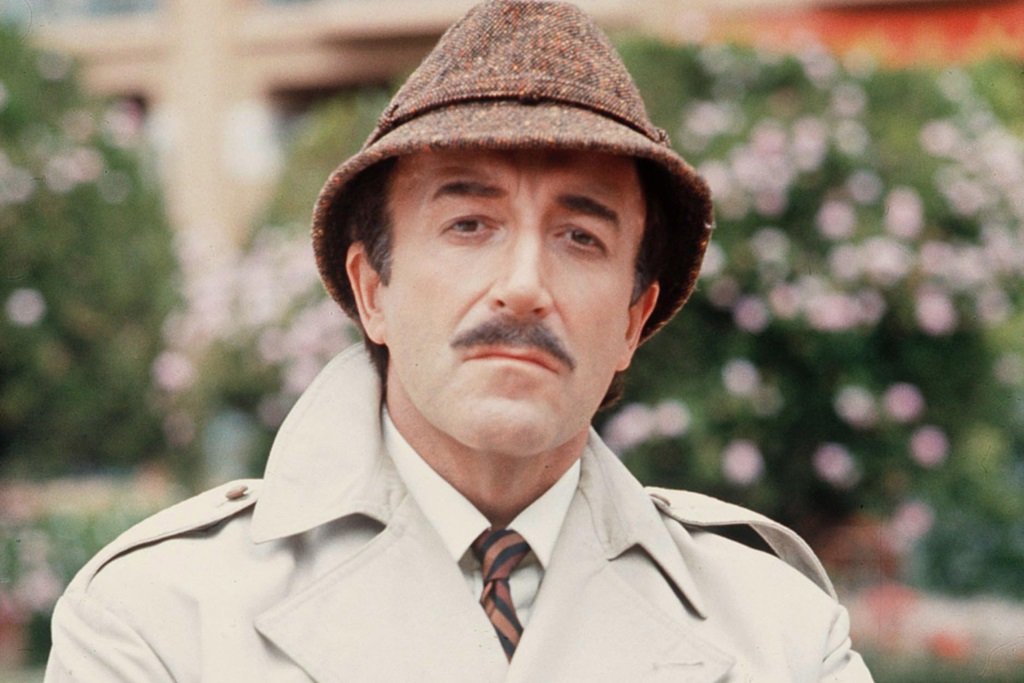 All six Pink Panther features directed by Blake Edwards and starring Peter Sellers as Inspector Clouseau are featured in this six-disc Blu-ray collection, four of them making their respective Blu-ray debuts.

Clouseau was but a supporting character in The Pink Panther (1963), a comic heist film with David Niven as the legendary jewel thief “the Phantom” out to steal a priceless diamond (called “The Pink Panther”) belonging to Indian Princess Claudia Cardinale, but Sellers’ mock-French accent and oblivious intensity made him the most memorable character. The bumbling French detective Clouseau also has a wife in this one, played by Capucine. Set in a posh Swiss resort and accompanied by an easy-going light jazz score by Henri Mancini, Blake Edwards’ mix of elegance and slapstick was a hit and Sellers was back as Clouseau in A Shot in the Dark (1964), this time without a wife, which gives him time to romance lovely murder suspect Elke Sommers. While the original film gave the series its name and its hero, it was A Shot in the Dark that defined the series by putting Clouseau in the lead and introducing two essential series characters: martial arts wielding manservant Kato (Burt Kwouk), who keeps his boss in shape by ambushing him every time her returns home, and tormented Chief Inspector Dreyfus (Herbert Lom), who barely survives the walking disaster that is Clouseau.

After a ten year break, Edwards and Sellers reteamed and revived Clouseau in The Return of the Pink Panther (1975), which puts the bumbling Inspector on the trail of the retired jewel thief The Phantom (now played by Christopher Plummer), the number one suspect when the Pink Panther Diamond is once again stolen. Lom and Kwouk also return and Catherine Schell co-stars. The series takes a wild turn in The Pink Panther Strikes Again (1976) as the by-now insane Dreyfus escapes from the mental asylum and turns himself into an international supervillain. He threatens to destroy the world with a death ray unless they bring him the head of Inspector Clouseau and the world complies by sending their finest assassins to kill Clouseau, who obliviously survives every attempt. More madcap than previous episodes, it features some of the funniest moments of any film in the series. Leslie-Anne Down co-stars and Omar Sharif has an unbilled role as the assassin from Egypt.

The series winds down with Revenge of the Pink Panther (1978), which lands Clouseau in Hong Kong with Dyan Cannon, and ends with a whimper: Trail of the Pink Panther (1982) was made after Sellers’ death, patched together from outtakes and deleted scenes as friends and foes remember the late detective. David Niven returns to the series for the first and last time since the original film, Joanna Lumley is the journalist on the trail, and Harvey Korman almost steals the film as master disguise-maker August Balls in one of the cutting room floor scenes with Sellers resurrected for the patchwork feature.

Edwards attempted to revive the series with Ted Waas in the lead (Curse of the Pink Panther, 1983) and again with Roberto Benigni as Clouseau’s offspring (Son of the Pink Panther, 1993) and Steve Martin took over as Clouseau in a 21st Century revival from director Shawn Levy (The Pink Panther, 2006), which also spawned a sequel, but the magic simply isn’t there. The creative comic partnership of Edwards and Sellers is unique (it extended to one non-Panther film, The Party, with equal success) and their slapstick collaborations are among the funniest films either of them ever made.

The Pink Panther Film Collection is on Blu-ray in a six-disc set from Shout! Factory. The Pink Panther features the same version featured on the 2009 Blu-ray release from MGM and A Shot In The Dark and The Pink Panther Strikes Again are mastered from new 4K scans of the interpositives. They all look good—there are no issues to speak of—and are each presented on a separate disc.

The supplements from the original Blu-ray release of The Pink Panther are all included on Shout! Factory’s release: commentary by Blake Edwards, the documentary featurettes “The Pink Panther Story” (which revisits the entire series in a 30-minute production), “Behind the Feline: The Cartoon Phenomenon” (a 10-minute look into the animated shorts spawned by the DePatie-Freleng-created credit sequences), “Diamonds: Beyond Sparkle” about the jewels featured in the film, and interview featurettes “Robert Wagner: The Coolest Cat in Cortina” and “The Tip-Toe Life of a Cat Burglar: A Conversation with former jewel thief Bill Mason,” plus a still gallery. New to the disc is “Italian Indian: The Pink Panther Princess,” an 11-minute interview with actress Claudia Cardinale.

A Shot in the Dark features new commentary by Jason Simos (of The Peter Sellers Appreciation Society), the 23-minute interview featurette “Back To The Start: The Origin Of The Pink Panther” with production company chief Walter Mirisch, and a 7-minute clip from “The Dick Cavett Show” with Blake Edwards and Julie Andrews.

The Return of the Pink Panther features commentary by Jason Simos, new interview featurettes with actress Catherine Schell (22 minutes) and production designer Peter Mullins (28 mins) and the archival promotional featurette “The Return Of Laughter: The Making Of The Return Of The Pink Panther” from 1975.

There are also trailers and galleries of promotional and publicity stills for each film and a booklet with an essay by Jerry Beck that surveys the entire series.