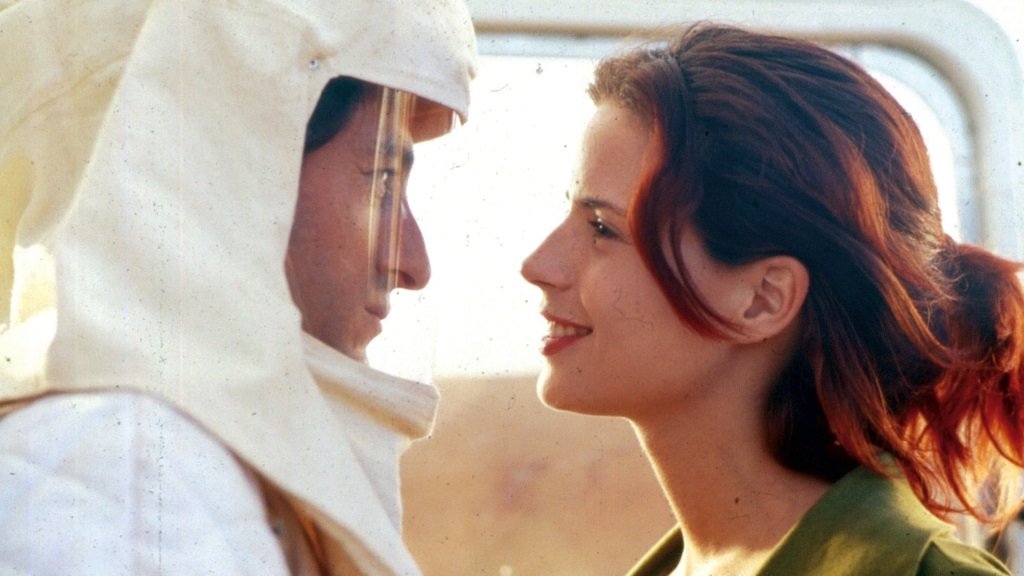 The vivid and lush films of Spain’s Julio Medem are as much about his country’s distinctive landscapes and natural wonders as they are about the restless and obsessive characters that wander through his world. Lovers of the Arctic Circle (1998) and Sex and Lucia (2001) established him as a major international filmmaker, earning strong reviews and American theatrical releases, but they only confirmed what his early films had established: a gift for narrative games and visual puns, and a passionate embrace of fate, fantasy, and the illogical power of love, all woven through criss-crossing stories with recurring images and motifs that intertwine, blur, and transform through time. Now Olive Films presents his first three features, long out of print on DVD, on Blu-ray for the first time along with new DVD editions.

The cows in the title of Spanish director Julio Medem’s debut film Vacas (Spain, 1992) are the silent, implacable witnesses to the feuds and flirtations of two clans between the Carlist Wars of 1875 and the devastating Spanish Civil War in 1936 The tragic lives and compromised heroes of Medem’s later films are simmering here in primal form here as Carmelo Gomez plays three generations of men (a war coward, his champion axe-man son, and the photographer grandson) whose destinies are, in one way or another, intricately wound up in lives of his neighbors. Ana Torrent and Emma Suarez co-star as the women in the lives of Gomez’s men.

It plays out in the rolling hills and thick forests of Basque country in Northern Spain. The direction is more subdued than in his more visually flamboyant later films but the gentle rhythms are as sensitive to the unique landscape that shapes these people as to his offbeat and obsessive characters and we get hints of his amazing eye for images and his fascination with natural mysteries (the eerie bottomless pit in the forest is like a strange storybook fantasy come to life).

Medem’s second feature Red Squirrel (Spain, 1993) is a dense mind game of cinematic delights. Pop star Jota (Nancho Novo) is girding himself to jump from a bridge to his death when enigmatic motorcycle-riding beauty Sofia (Emma Suarez) crashes into the guard rail and jolts him out of his suicidal plans. She rouses from a spectacular wreck with amnesia and he spins a fantasy where she’s his old girlfriend and she choose to play along as her memory comes back. The complex weave of lies, deceptions, and past lives keep bubbling to the surface take on a life of their own as they “recover” together at a remote campground. There is desire and obsession to spare but there’s a give and take between. Then madness rears its head when a maniacal, dangerous Felix (Carmelo Gomez) comes searching for Sofia.

Think It’s a Wonderful Life colliding with Vertigo (Jay remakes Sofia into the image of his lost love) in a Spanish melodrama of mind games and sex games. Medem constantly shifts the ground from under the audience with sly revelations, shifting perspectives, and mock-documentary inserts on the mating habits of the endangered Red Squirrel, which become a wry running commentary on the games people play. Medem weaves in quotes from Bernard Herrmann’s lush Vertigo score through the soundtrack but for all this is a much more playful and airy film. The lies and the stories become a running game between the Jota and Sofia as they catch one other in their slips.

Tierra (Spain, 1995) begins in the heavens and looks down to Earth, the camera diving down through space to a microscopic examinations of the underworld beneath of the red soil of a remote wine growing region Spain. Angel (Carmelo Gomez one again) attempts to find grounding in his work—he’s been hired to fumigate the area, which has been infested by wood lice—but finds his wandering soul torn in two directions. Initially attracted to the lovely, lonely, ethereal Angela (Emma Suarez), he finds himself drawn against his better nature to the earthy, passionate, impulsive Mari (Silke). Angel’s better nature is a phantom double that watches over him like an aggressive but well meaning conscience.

Medem sets his tale of love and lust amidst the stunning, austere landscape of fiery red hills, a world both primal and alien (dressed in white protective suits, the fumigators look like astronauts on the red planet Mars) where the enigmatic wood lice lives underground and angels live among the humans above. As in Red Squirrel, Medem winds multiple stories together with natural history and philosophical musings until it all melts together in a lovely and unexpected conclusion. Medem weaves just as dense a story in his more widely-seen follow-up film, Lovers of the Arctic Circle, but where that film leapt into the emotional world of tragic melodrama, Tierra transforms “wrong” choices into a revealing insight into the beautiful contradictions of human nature and the illogical power of love. I still believe it to be his most transcendent and beautiful film.

All three are in Spanish with English subtitles and remastered for Blu-ray and DVD.
Vacas [Blu-ray]

Vacas has deep, earthy colors and a thick grain to the image. There are very minor issues in the original source materials (particularly in the heads and tails of film reels, which are at time shaky or show some scuffing) but otherwise it has a rich look.

The Red Squirrel and Tierra both have brighter and sharper images and crisper soundtracks, likely due to better source materials and a bigger production budget. There is some grain to the images. The do not appear to be restored but they have been remastered in HD and all three are major improvements over the old DVD editions.

There are no supplements.