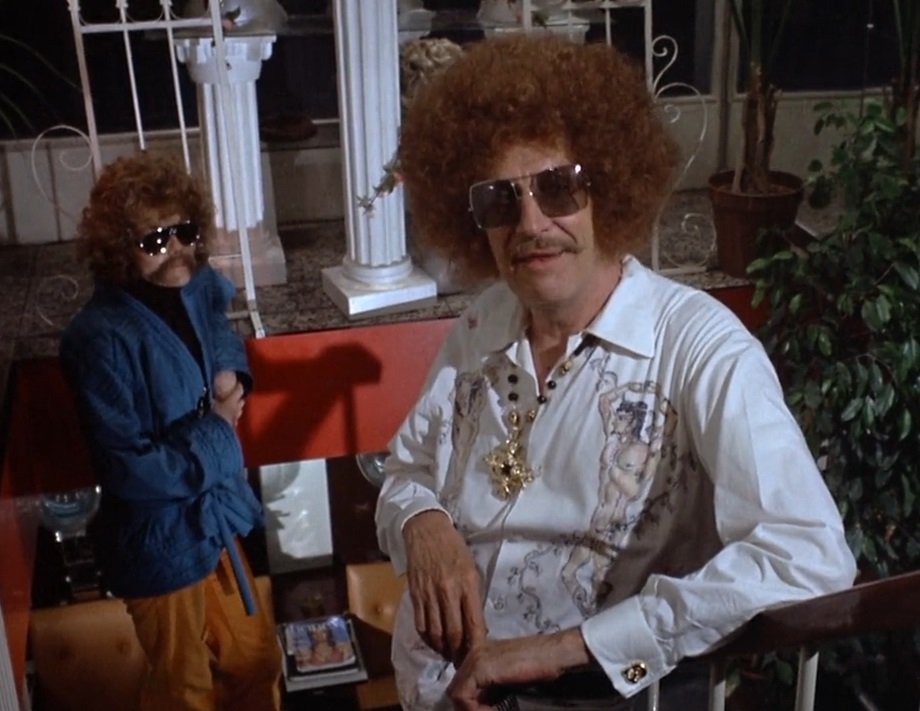 Here are some notes on a few Twilight Time releases I’ve enjoyed but not had time to write up feature reviews. I’ll be listing all the supplements but know that each disc also features Twilight Time’s trademark isolated score, the original trailer, and an accompanying 8-page booklet with an essay by Julie Kirgo. Each disc is limited to 3000 copies.

The Mad Magician 3D/2D (1954) (Twilight Time, Blu-ray), the last of Columbia’s 3D pictures in the original 3D boom, is clearly cashing in on the success of House of Wax, the Warner Bros. hit that helped launch the fad just a year before. It’s got Vincent Price as another artist turned killer, a screenplay by Crane Wilbur, a period setting, and grisly murders and visual stunts in 3D.

Price plays an inventor of magic-act props and tricks who is betrayed by his controlling boss when he tries to strike out on his own. The mild-mannered inventor turns murderer and concocts an elaborate cover-up to continue his reign. Overly complicated and under-developed, this stock horror has its moments of invention, and director John Brahm even quotes from his own glory days of Gothic noir: the rented garret hideaway of the 1944 The Lodger and the bonfire piled high with sticks and furniture, the perfect place to get rid of a corpse, from Hangover Square. The rest is just another knock-off rushed through on the cheap by a director who gives his best in trying circumstances, but it could be the template for the kind of films Price would go on to make for William Castle.

Twilight Time presents both 3D and standard (2D) versions of the film on a single disc, with commentary by film historians David Del Valle and Steven Peros and the new 20-minute featurette “Master of Fright!: Conjuring The Mad Magician” plus two “Three Stooges” shorts in 3D: Pardon My Backfire (1953) and Spooks (1953). You have the option to access either 3D or 2D versions of the film, but without a 3D player and compatible TV, the 3D version will not engage.

Theatre of Blood (1973) (Twilight Time, Blu-ray) offered Vincent Price one his juiciest roles in the 1970s and he hams it up as an insane, overacting Shakespearean actor who takes his vengeance on the critics by murdering them with elaborate and sadistic set pieces. It recalls his Dr. Phibes films in the flamboyant and darkly humorous killings, but in this film each is inspired by the plays of Shakespeare.

Prince appreciated the opportunity to deliver Shakespeare soliloquies before each murder and he cited the film as one of his favorites. Diana Rigg is his dutiful daughter, who helps stage his terminal curtain calls, and Ian Hendry is the police detective on his trail. It’s dutifully directed by Douglas Hickox, who knows that in this case, it’s not the play but the players who make this work and makes the most of a cast of victims that includes Coral Browne, Harry Andrews, and Robert Morley, who all have as much fun with the tongue-in-cheek script and gallows humor as Price does.

Tony Rome / Lady In Cement (Twilight Time, Blu-ray) – Frank Sinatra’s insouciance carries the glib but entertaining Tony Rome (1967) and its sequel Lady In Cement (1968), a pair of ring-a-ding-ding detective stories starring with Sinatra as a swinging Miami P.I. with a weakness for the horses and a houseboat for a home base. In Tony Rome he hauls a plastered underage socialite (Sue Lyon) home to her millionaire father and winds up sorting his way through family secrets and a blackmailing thug. Richard Conte co-stars as Rome’s cop buddy and young Gena Rowlands is the millionaire’s trophy wife. Nancy Sinatra sings the swinging theme song.

Lady In Cement opens on a scuba-diving search for treasure that finds a naked blonde in cement overshoes and turns into a girl hunt in the hire of the jolly yet volatile ex-con (Dan Blocker). Raquel Welch co-stars and Conte reprises his role. Both are directed with a tough-guy laziness by Gordon Douglas, who has a tendency to leer at the female assets and zoom in for screen-filling tush shots.

Both films are on a single disc, with commentary on Tony Rome by film historians Eddy Friedfeld, Anthony Latino, Lee Pfeiffer, and Paul Scrabo.

The Detective (1968) (Twilight Time, Blu-ray) is an altogether more serious crime drama, with Sinatra as “best cop in the city,” an incorruptible police detective in a corrupt culture who doesn’t take grief from politicians or bigwigs and sacrifices his marriage (to a lively Lee Remick) to the job. An honest, open-minded cop in an intolerant department, he battles gay-bashing vice cops Robert Duvall and Ralph Meeker while closing the murder of a gay swinger, and re-opens the case when a new investigation uncovers a conspiracy that sheds new light on the old case.

While the film has its issues—the treatment of homosexuality as a perversion—it’s still pretty modern for a mainstream studio movie and anticipates Serpico in its presentation of the police department as a knowingly corrupt and compromised institution. It’s a better story than a film, awkwardly paced (again by Douglas) and scripted and terribly dated, but Sinatra coasts through it with world weary resoluteness. Jack Klugman, Al Freeman, and Jacqueline Bisset co-star. And as a trivia note, it’s based on a novel by Roderick Thorpe and Sinatra plays the same character who took the lead in the novel that was turned into Die Hard with Bruce Willis.