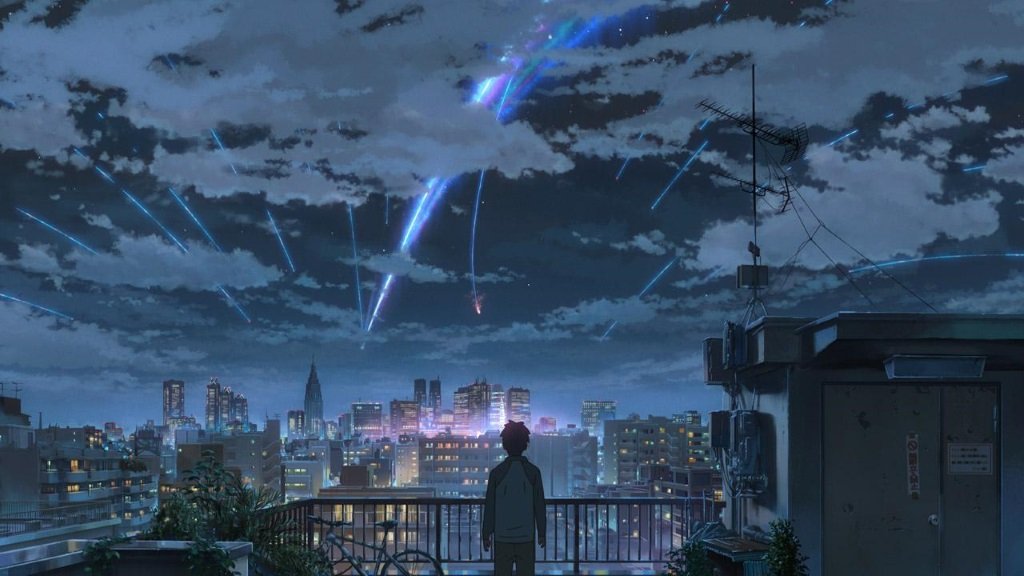 Japanese animator and filmmaker Makoto Shinkai turns his own young adult novel into Your Name. (Japan, 2016), an animated feature that brings a fresh approach to the classic comic situation of body swapping.

In this story two high school students who have never met, a boy named Taki and a girl named Mitsuha, suddenly wake up in one another’s body and try to fake their way through a day in the life. They have no memory of the experience when they return to their own lives the next day but discover that they’ve lost a day and her friends have stories about their behavior they don’t remember. When it happens again and again, without warning or discernible rhyme or reason, they start leaving messages for one another through their smartphones. Then it stops just as suddenly as it began, but it’s just the beginning of a story that mixes metaphysics and mystery in a poetic story of two people who never meet yet change one another’s lives, even if they can’t remember the connection and only learn of it from notes left behind, an entire conversation that reaches across time and space. Taki uses the paintings that Mitsuha left behind to look for her. There’s a touch of science fiction to what otherwise seems like magic as it shifts into a kind of disaster movie.

It’s a contemplative and introspective film that uses the body-swapping gimmick to explore growing up and experiencing life from another perspective, and it celebrates how connections to culture and family shape who we are. Shinkai uses his animation to capture delicate scenes of wonder and grace as well as comic moments and dramatic images, but it is always grounded in the lives of its young characters and it refuses to slip into cliche. This is a marvelous animated feature, but more than that, it is a lovely movie.

It was a major hit in Japan, the most successful animated feature out of Studio Ghibli’s productions, and picked up a number of international awards and a limited release in American theaters. Animation fans have been celebrating this film. I hope folks outside the animation community will get a chance to discover it.

Rated PG and is fine for all audiences.

On Blu-ray and DVD, with original Japanese language and English dub soundtracks and optional subtitles. I watched the Blu-ray with the original Japanese soundtrack. I really enjoy the lighter palettes of the young adult and historical dramas like this, which a have much more minimalist approach compared to the bright, detailed colors of CGI. The color was beautiful, it’s crisp, and the soundtrack has a delicacy to match.

Also includes a 25-minute interview with filmmaker Matoko Shinkai, an animated filmography, and a 22-minute featurette originally made for Japanese TV (all in Japanese with English subtitles).
Your Name [Blu-ray/DVD Combo]

The original Japanese title Napping Princess (Japan, 2017) translates to Ancien and the Magic Tablet, which is a little more descriptive but isn’t any better at announcing the clever and creative mix of magical fantasy, real-world adventure, and family drama. It opens in fantasy mode (“A long time ago in kingdom of Heartland, everybody’s job was to build cars”) with teenage sorceress Princess Ancien hidden away from the car-obsessed King by a scheming would-be usurper. When high school girl Kokone wakes up, it was all a dream, one that has been continuing like a serial adventure or an alternate life. In life she’s the spirited daughter of a single father, a former engineer turned friendly (if aloof) neighborhood mechanic. Set in 2020 just days before the opening of the Summer Olympics in Tokyo, the plot involves a corporate plot by a scheming officer at Shijima Motor Company to steal the program for a self-driving car developed by Kokone’s father. In dream she’s the heroine of a fairy tale that mixes magic and mecha and palace intrigue. The characters in her dreams have direct connections to Okone’s life, from a stuffed bear left by her mother to the President of the motor company who looks just like the king in her dreams.

This delightful animated feature is written and directed by Kenji Kamiyama, who made the terrific Ghost in the Shell: Stand Alone Complex TV shows and features, and he mixes fantasy and technology into a story sustained by the spirit of a high school girl and her sidekick and protector as they flee the corporate bad guys. The ending leans a little too far into action movie excess but otherwise this colorful, briskly-paced feature is both an imaginative adventure and a touching and sweet story about family and friends and loyalty.

On DVD and Blu-ray with option of original Japanese and English dub soundtracks with optional English subtitles. I watched the Blu-ray with the Japanese soundtrack, which I found wonderfully expressive. The color is bright and the disc looks great. The supplements are brought over from the Japanese release: a chatty TV interview program with the voice cast, an interview with filmmaker Kenji Kamiyama, a nice comparison between the video reference footage they shot in the city of Okayama put next to images of the film, plus footage from the Japanese Premier and additional interviews, all in Japanese with subtitles. The Blu-ray features a bonus DVD copy of the film.
Napping Princess [Blu-ray/DVD Combo]

In This Corner of the World (Japan, 2016), adapted from the acclaimed manga by Fumiyo Kono, charts life in Japan from 1934 through 1946 as seen through the eyes of a young woman.

Suzu is a teenage schoolgirl in Hiroshima when we meet her, a budding artist with a bullying older brother and a spritely younger sister, who marries a boy she barely knows and becomes part of his family in Kure, a nearby town with a major naval port. We quickly skip through the years to the World War II, which seems far away and unreal at first but becomes more present as the war turns, friends and family members are reported dead in combat, and air raids become increasingly frequent and destructive. Through it all Suzu tries to be a good wife to her gentle husband and a devoted daughter to her in-laws, finding ways to stretch meager stores as food rations become smaller and enduring the devastating attacks on her home that ultimately take members of the family.

It’s illustrated in the traditional hand drawn style of classic Japanese animation with simple lines and subdued, painterly colors and takes a reflective approach to Suzu’s story, approaching it through her energy and optimism and imagining harsh reality through the artist’s eye of Suzu. Even the atomic attack on Hiroshima is seen from afar, a storm cloud emerging from behind a mountain. Yet for all the loveliness of the imagery and the tenderness of the drama, director Sunao Katabuchi never denies the loss and destruction of the war. It ducks politics and mostly steers clear of the militancy of Japanese culture that drove the country to war, which only bubbles to the surface in one outburst late in the war. Instead it focuses on the civilian experience of the working class outside of urban society, the spirit of survival within families and communities, and the compassion that rebuilds the family in the aftermath. But there are touches that remind us, in the gentlest of nudges, of the culture they know nothing about just outside their experience. My favorite is an accidental detour through the base town’s red light district, where Suzu meets a girl her own age and then leaves without ever learning what kind of business is conducted around her. Like that scene, the film is really quite delicate for such heavy themes and experiences.

Rated PG-13 for mature themes but no explicit imagery or language.

In This Corner Of The World [DVD]

Discs provided by Shout! Factory and Funimation for review purposes.