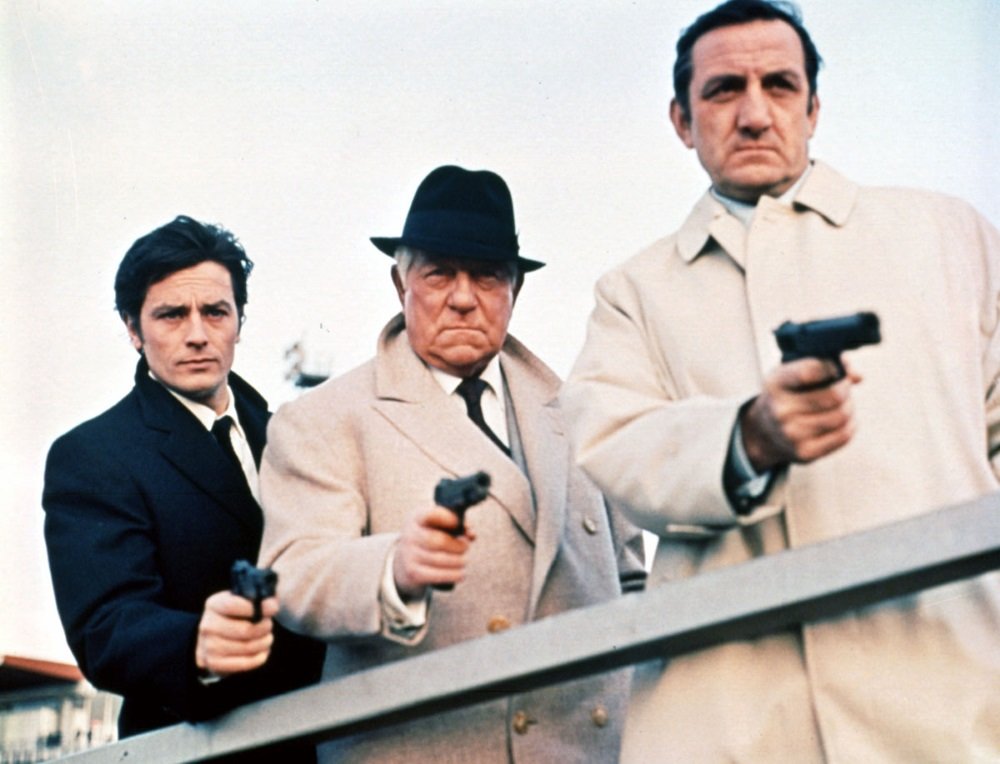 Three of the great icons of French crime cinema team up for The Sicilian Clan (France, 1969) (Kino, Blu-ray, DVD). Jean Gabin is Vittorio Manalese, the head of the Sicilian Manalese clan in Paris, Alain Delon the reckless, amoral French criminal and killer Roger, who hires Vittorio’s clan to spring him from custody, and Lino Ventura Commissaire Le Goff, the man who captured Roger. After Roger escapes, Le Goff struggles with is efforts to give up smoking.

The film opens with a terrific escape, not from prison but from prison transport in the chaos of a traffic snarl, in a nicely-engineered sequence crisply directed by Henri Verneuil. No guns needed here—the Manalese clan doesn’t kill during their capers—and Vittorio is wary of Roger, a loner who has killed more than one cop in his robberies, as he puts him up in a private apartment above the family home. But when Roger brings a big jewel heist his way, he agrees to partner up and proceeds to find a New York partner and case the target: an exhibition hall in Rome with state-of-the-art security. Vittorio meets up with distant New York mob cousin Tony Nicosia (played with dapper charm by Amadeo Nazzari), who he hasn’t seen for thirty years, and they slip into instant rapport and easy friendship as if no time has passed as they case the Rome exhibit. When they find the new technology impenetrable, Vittorio comes up with a new plan: hijacking the flight delivering the jewels to New York City in a genuine family affair.

The Sicilian Clan is based on a novel by one real life criminal turned successful crime author, Auguste Le Breton, and adapted by another, José Giovanni: two generations of crime fiction informed by criminal experience. The film has a touch of old school French crime drama, with Vittorio as a gentleman criminal whose code (they don’t kill) is as much smart business as professional pride and moral position. They are loyal to their partners and treat crime as a family affair. This family, however, embraces its Sicilian cultural identity to the exclusion of others, including Vittorio’s French daughter-in-law (Irina Demick), who is constantly reminded that she’s an outsider in this old world culture. It’s not hard to understand her attraction to Roger, who is not just handsome and charismatic but dangerous and daring and modern. That attraction, of course, will unravel everything. It’s always the human part of the equation that upsets the perfect plan and the betrayal here is strictly personal.

Verneuil doesn’t have the directorial elegance of Jean-Pierre Melville and he’s not as interested in exploring the underworld culture of their crime world as he is in establishing the insular clan of the Manalese family, but he’s terrific at the caper movie mechanics. The two big set pieces—the prison transport escape and the intricate airliner heist— are tight and suspenseful sequences directed without exposition and with minimal dialogue. He delivers a solid, tightly-directed heist thriller with continental style, international star power, and an ill-advised twist of vengeance that leaves no one untouched.

This international coproduction was shot in two versions, one in English (for the U.S. and other English-speaking territories) and one in French and Italian with a smattering of English for Europe. This European cut runs seven minutes longer and uses the difference in language to define the characters and relationships: the Manalese family speaks French in the world but Italian at home, separating themselves from Roger and Vittorio’s very French daughter-in-law. As the plane hops from Rome to Paris to New York, English becomes the lingua franca. Kino presents new HD restorations of both versions on two-disc set on DVD and Blu-ray and they look great, with bright, strong color and sharp images and no visible damage.

English language version features audio commentary by Howard S. Berger and Nathaniel Thompson and the set also includes the 63-minute documentary “Legend of the Clan,” originally made for French home video, and the 4-minute interview featurette “The Sicilian Clan by Fred Cavaye,” both in French with English subtitles. There’s also an animated montage of stills and artwork.