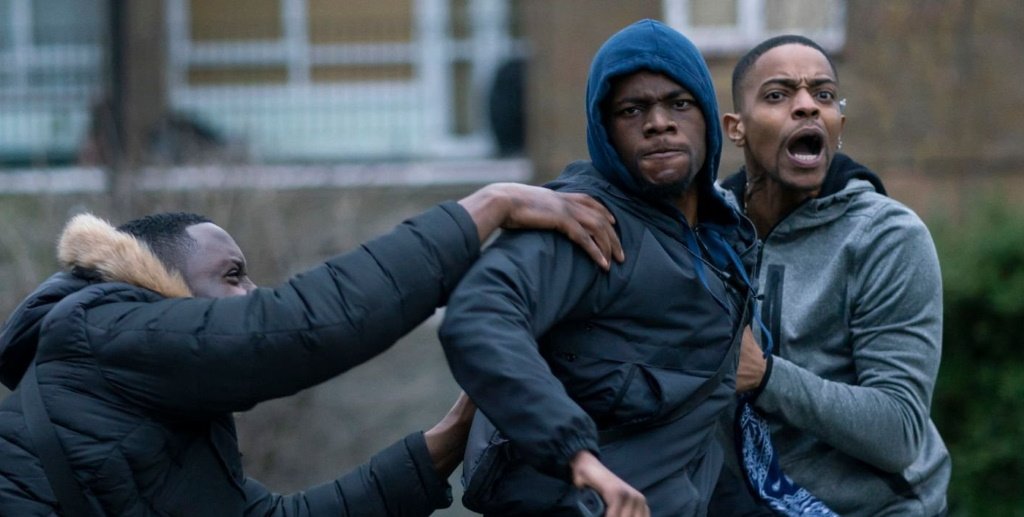 Best friends (Stephen Odubola and Micheal Ward) who live in different South London boroughs but attend the same high school find themselves on rival sides of a brewing gang war in “Blue Story” (2019, R), an urban drama with a Romeo and Juliet twist. (Amazon Prime and Hulu)

Pedro Pascal (“The Mandalorian”) stars in a different kind of sci-fi frontier thriller in the indie “Prospect” (2018, R), trying to survive a hostile planet with the help of a young pioneer woman (Sophie Thatcher). (Netflix)

Celebrate the legacy of Sean Connery, the original big screen James Bond, with “From Russia with Love” (1964), the second 007 film and one of the best. If you need addition Connery action, you can also stream the gadget-laden “Thunderball” (1965) and “You Only Live Twice” (1967). (Hulu)

Classic pick: The powerhouse pairing of John Wayne and Maureen O’Hara drive “The Quiet Man” (1952) John Ford’s sweet and sentimental drama about strapping American ex-boxer who tries to rebuild a life in Ireland. Ford turns Wayne into a romantic hero and populates the shamrock green Irish village with figures full of blarney and charm, among them Barry Fitzgerald, Ward Bond, Mildred Natwick, and Victor McLaglen as O’Hara’s snarl of a brother. (Amazon Prime)

“Possessor” (2020, R), a mix of sci-fi and horror from filmmaker Brandon Cronenberg, stars Andrea Riseborough and Christopher Abbott as people who hijack the bodies of others.

“They Reach” (2020, not rated), an indie production about a trio of young demon hunters shot in Washington with local talent, pays tribute to 1970s horror movies. Also new:

The British thriller “The Informer” (2019, R), starring Joel Kinnaman as a deep cover agent infiltrating the mob at a maximum security prison, makes its stateside debut on Premium VOD.

International Passport: Based on a true story, the thriller “Mother” (Japan, 2020, not rated, with subtitles) follows the toxic relationship between an abused son and his controlling, erratic mother (Masami Nagasawa). Also new:

The holiday romances start rolling out this week on Netflix. There’s the holidays in the South Seas comedy “Operation Christmas Drop” (2020) with Kat Graham and Alexander Ludwig;

Kid stuff: “The Indian in the Cupboard” (1995, PG), a fantasy about a nine year old boy who magically brings his three-inch toy Indian to life.

“Wayne: Season 1” (2019, TV-MA), an action comedy from the producers of “Deadpool” and starring Mark McKenna as a teenage hero on a dirtbike, comes to Amazon from YouTube Premium.

Streaming TV: For the month of November only you can stream the first seasons of the British series “Delicious” (2016, TV-14) and “The Restaurant” (Sweden, 2017, not rated, with subtitles), two dramas of family and cuisine.

Winner of the Grand Jury Prize at Sundance 2012 and nominated for four Oscars, “Beasts of the Southern Wild” (2012, PG-13) is an imaginative and vibrant film that rolls out like a stream of consciousness poem from the mind of a little girl who intermixes fantasy and reality. (All HBO platforms)

Kid stuff: “The Iron Giant” (1999, PG) is a magnificent and sweet sci-fi fairy tale of a boy and his giant robot buddy in comic book color and the fantasy adventure “The Neverending Story” (1984, PG) got a call-out in the last season of “Stranger Things.” (HBO Max)

American classics arriving this month include the savage satire of demagoguery “A Face in the Crowd” (1957) with Andy Griffith;

Julia Stiles returns in “Riviera: Season 3” (TV-MA) as a widow searching for her husband’s killer in the European underworld. New episodes each Thursday. (Sundance Now)

David Thewlis and Luke Wilson star in “Guest of Honour” (2019, not rated) a drama by Atom Egoyan that makes its streaming debut. Also new this week: