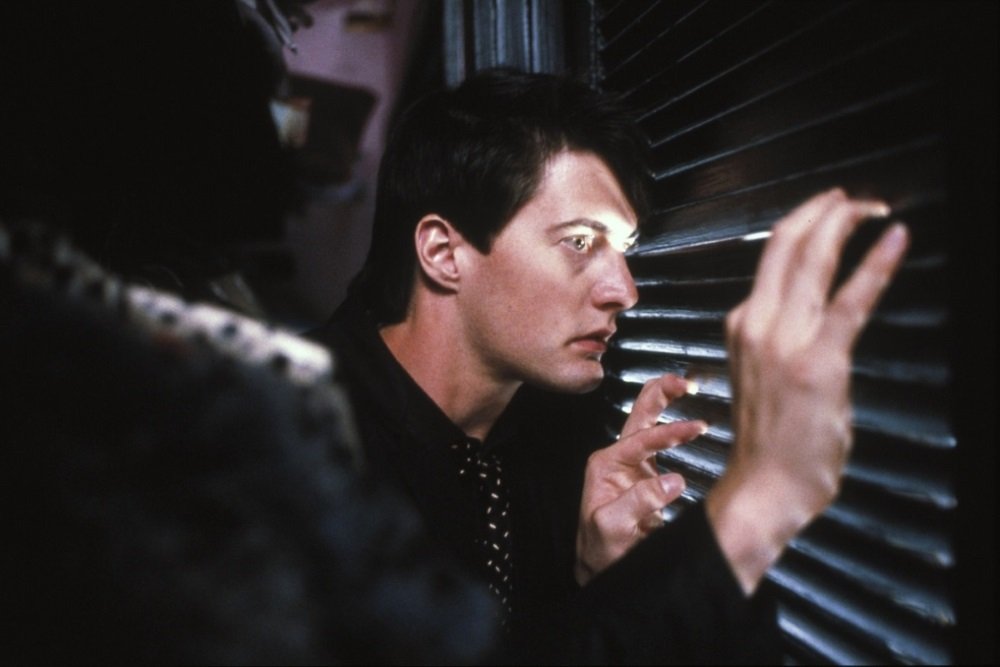 David Lynch looks behind the smiling faces and stucco houses of small town America and finds a shadow world of pure evil in Blue Velvet (1986).

From the opening shots Lynch turns the Technicolor picture postcard images of middle class homes and tree lined lanes into a dreamy vision on the edge of nightmare. College boy hero Kyle MacLachlan and Nancy Drew high school innocent Laura Dern delve into a mysterious case revolving around a severed human ear, and MacLachlan moves from boy scout to voyeur to participant, plunging into a nightmare of sex and sadism he’s alternately repulsed and obsessed by.

Lynch’s eerily mundane sets and locations, real world settings stripped to a ghostly austerity, make his odyssey all the more insidious, and composer Angelo Badalamenti adds to the texture with the smooth, spooky strains of his lush score. Dennis Hopper’s manic, obscenity-shouting performance as sadistic drug dealer and blackmailer Frank Booth became his Hollywood comeback and, by most accounts, earned him an Oscar nomination (that it happened to be for another film is beside the point; Academy voters couldn’t exactly nominate him for such a ferocious, disturbed, psychically damaging creation, now, could they?).

Decades later, it’s just as effective, unsettling and unnerving. You can see the roots of Twin Peaks in this story of rot under the small town smiles.

Lynch earned an Oscar nomination for best director and Isabella Rossellini won an Independent Spirit Award for her performance. The National Society of Film Critics were far more aggressive in their admiration of the film, giving it four awards, including best film and best director.

The Blu-ray and DVD includes the excellent 70 minute documentary “Mysteries of Love,” featuring interviews with almost everyone involved in the production from the stars to composer Angelo Badalamenti (whose first collaboration with Lynch this was). Everyone but Lynch, of course, who appears only via an archival interview from 1987. The new interviews are, of course, shot against a blue velvet curtain. There is also a 10 minute featurette showcasing deleted scenes reconstructed from production stills (according to the introduction, those scenes no longer exist in any other form), a very short set of outtakes, stills, posters, and a trailer.

Exclusive to the Blu-ray is a collection of over 50 minutes of deleted scenes, both lovely and horrible, human and hellish, edited into a phantom feature of stories around the edges of the film. These pieces were pared away in the editing, like a sculptor chiseling away to get to the perfect form, but they are full of visual delights and offbeat humor, narrative sidetrips and character embellishments. Some scenes simply cast a mood of unease or anxiety over the proceedings. Yet all are glimpses into the inspiration and explorations of Lynch as a filmmaker and marvelous addenda to the finished film, a look into roads not taken and details whittled away to reach the narrative focus and tonal balance of the final piece.

While Lynch is never one to revise a finished film, he’s clearly proud of the work in these deleted scenes. “It was too much of a good thing,” is how he once explained cutting a favorite scene, but he’s happy to share those good things with us. He personally supervised the editing of these clips into a 50-minute supplement on the Blu-ray.