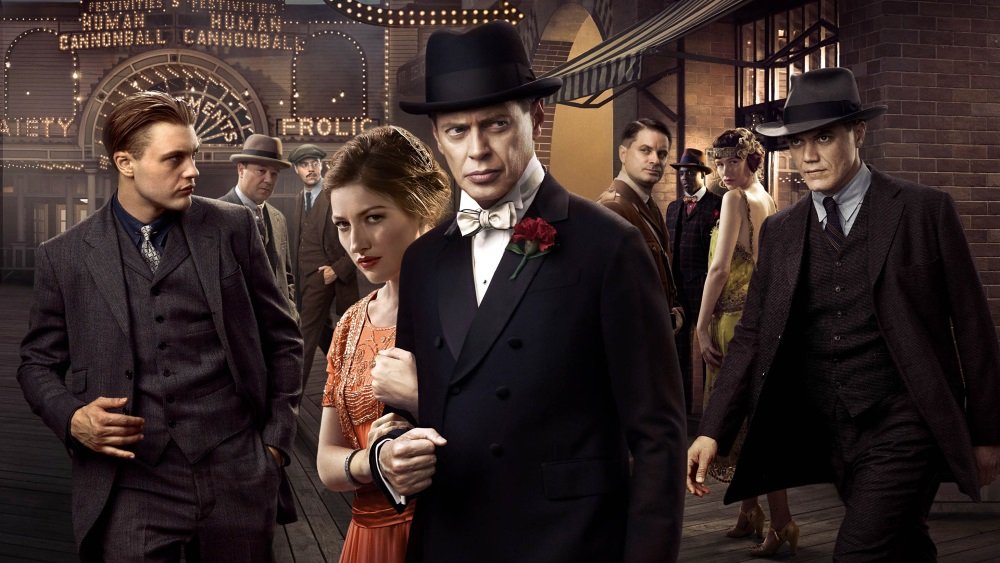 Boardwalk Empire opens with Nucky Thompson (Steve Buscemi), the treasurer of Atlantic City and the man who runs the town—and the graft—from behind the pose of public service, toasting the U.S. Congress and the new possibilities that the twenties will bring, thanks to the utterly disastrous “noble experiment” known as Prohibition. Everything changes from that moment.

Created by The Sopranos writer/producer Terence Winter, based on the book by Nelson Johnson, and co-produced by Martin Scorsese (who directs the pilot episode), Boardwalk Empire is a lavish period drama that chronicles the birth of the modern organized crime syndicate, built on the fortunes made bootlegging liquor and running illegal imports of the real stuff from out of country. Nucky isn’t a gangster per se as the series begins, merely a thoroughly corrupt politician with his fingers in everything and a gift for keeping a harmonious balance, but the competition for territory by rivals pushes him to more violent methods, and more volatile partnerships: Arnold Rothstein (Michael Stuhlbarg of A Simple Man), Lucky Luciano (Vincent Piazza), Meyer Lanskey (Anatol Yusef), and a young Al Capone (Stephen Graham) among them.

This is a grand canvas of characters, both real and historical, with the quasi-fictional Nucky (based loosely on real life Atlantic City treasure Enoch “Nucky” Johnson) as the low-key power broker at the center. Michael Pitt co-stars as Nucky’s would-be protégé Jimmy Darmody, a young World War I vet serving as muscle but with the ambition and smarts for much more, and Kelly Macdonald is a poor Irish immigrant who becomes a widow (thanks to Nucky) and, later, Nucky’s mistress and then wife. Michael Shannon rounds out the primary characters on the opening seasons as the pious FBI Agent Nelson Van Alden, who treats his job like a holy crusade but has his own demons, but dozens of characters and stories weave through their journeys, including Shea Whigham (in a superb performance) as Nucky’s brother and the county sheriff, Paz de la Huerta as Nucky’s showgirl mistress, Michael Kenneth Williams (The Wire) as Nucky’s opposite in the black community and Dabney Coleman as The Commodore, the retired boss of Atlantic City.

It’s also a magnificently mounted piece of television centered on a fabulous recreation of the old Boardwalk (built in Brooklyn as a standing set and extended / filled out via the magic of CGI). It’s where Nucky conducts business and it’s the social center of the city and the show, but as series continues through the season, the show’s reach extends to Chicago, New York, Kansas City, and Florida as the networks are established and the pipelines of liquor established.

Bobby Cannavale steps in as Gyp Rossetti, an ambitious Sicilian bootlegger looking expand the business of his old-school New York underboss, in the third season. He takes on Nucky by occupying the delivery route between Atlantic City and New York and heisting the business right out from under him, pushing the whole thing to a mob war. It’s a classic gangster trope, sure, but the show focuses on the complexity of the power struggle and the wild cards in play and it uses the growing challenge to give blacksheep brother Eli (Whigham) a chance to redeem himself as he figures out what Rossetti is up to and masterminds the response. It also has a fascinating take on marriage and family, especially as it contrasts Nucky’s serial adultery with the devotion that his brother commits to his family.

Patricia Arquette joins the fourth season as a savvy Florida speakeasy owner who helps Nucky set up and run his new liquor pipeline from the Caribbean and Jeffrey Wright is Harlem power broker Valentin Narcisse, who runs his criminal activities beneath a façade of social works and tries to muscle in on Nucky’s territory. The fifth and final season jumps years ahead a few years to 1931, when talk of ending Prohibition is in the air and Nucky scrambles to stake his claim in the legal booze trade (he attempts to strike a deal with a certain Joseph Kennedy) while Luciano and Lansky plot to unite the major mobs into a syndicate and eliminate the competitors and outliers and the FBI goes after Capone on tax evasion in Chicago.

While creator Terence Winter is guided by history, he isn’t strictly beholden to the record for all of his dramatic developments, at least when it comes to Nucky. Winter may have been hampered by the short season (8 episodes rather than the usual 13) but his choice to end the series in transition seems more creative than convenient and he quite ably contrasts Nucky’s personal journey (complete with flashbacks to his formative years learning the ways of power and the corruption of the powerful) with the rise of the modern mob and he saves Nucky’s original sin for the final episode: his Rosebud of sorts. It’s a smart, succinct, and interesting end to a compelling series.

HBO’s deals with Amazon Prime are coming to an end next year and HBO has signaled that it wants to keep its original shows as HBO Now exclusives so if you want to see this show on Amazon Prime, now is the time to start.

Features nudity, violence, and foul language and is for adults.

Add to Amazon Prime watchlist or watch it on HBO Now, HBO GO, or HBO On Demand

, iTunes, GooglePlay and/or other services. Availability may vary by service.
Boardwalk Empire: The Complete Series [Blu-ray]