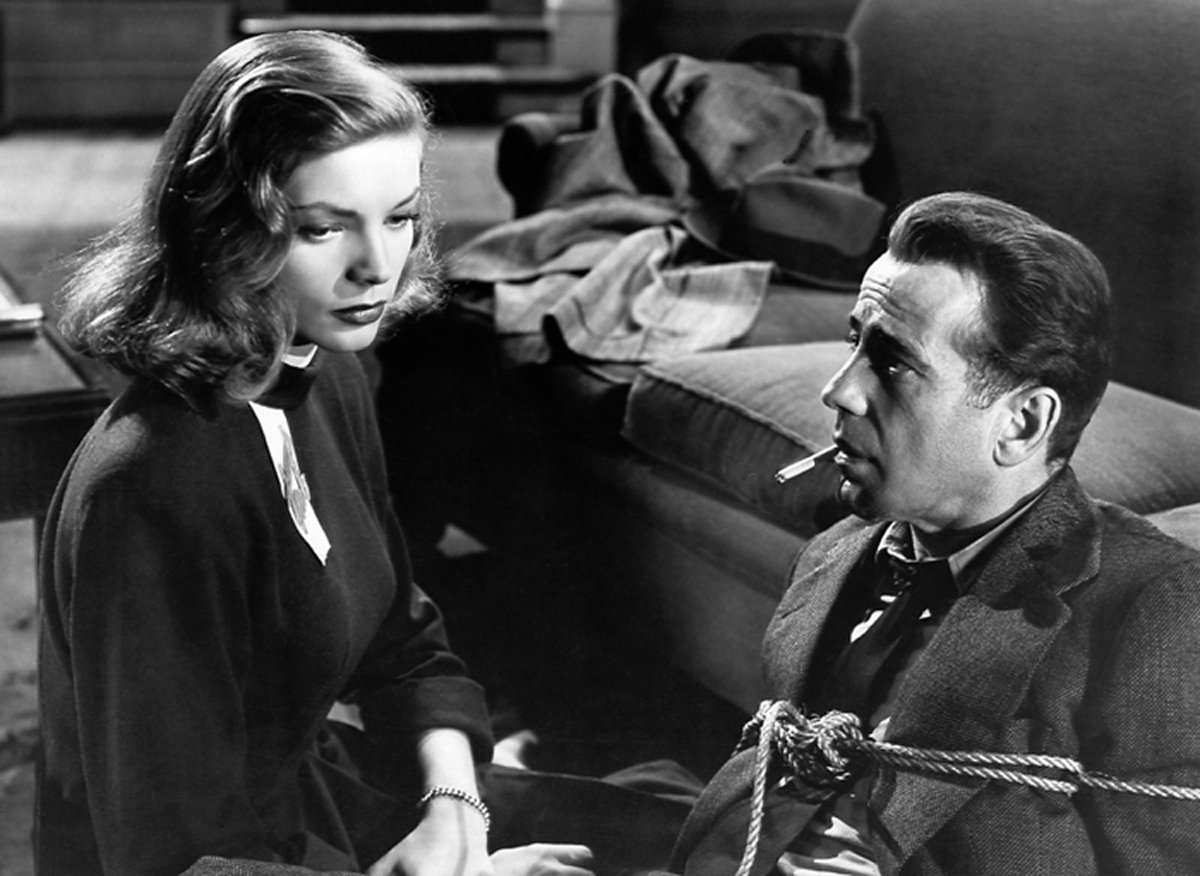 Humphrey Bogart is seductive in an insolent way as the screen’s smoothest Philip Marlowe in The Big Sleep (1946), Howard Hawks’ hardboiled adaptation of Raymond Chandler’s classic detective novel, and Lauren Bacall is his match as Vivian Rutledge, the spoiled socialite daughter of his client.

The mystery revolves around blackmail, petty gangsters, and an underground pornography ring but the movie is carried by the sparks between of Bogart and Bacall in their second screen pairing (she made her debut opposite Bogart in To Have and Have Not and they became a real-life couple soon after).

The snappy script and witty dialogue, written by the great American author William Faulkner and screenwriting legends Leigh Brackett and Jules Furthmann, is rife with sexual metaphors and cutting bon mots and the convoluted mystery serves as a backdrop for a charged romance and a contemplation of honor in the corrupt culture of L.A.’s underworld. Martha Vickers plays Vivian’s reckless, sexually precocious younger sister and Dorothy Malone is memorable in one of her first significant roles as a bookstore owner who helps out Marlowe with a case, then closes shop for a little afternoon romance.

The release was delayed for a year as Hawks added new scenes, including a deliciously suggestive conversation between Bogart and Bacall where horse racing becomes a not-so-thinly veiled metaphor for sex (“A lot depends on who’s in the saddle”), and removed others, including a plodding exposition scene where Bogart does little but listen to the DA try to clarify the complicated plot. That explanation was, as it turned out, unnecessary; plot is secondary to the drama onscreen. That earlier version was never released in the U.S. but it did play for American soldiers overseas and a print was rediscovered in a UCLA film archive in the 1990s. Some disc editions include it as a supplement.

The original, meanwhile, is an American classic, arguably the greatest film made for a Chandler novel, and the definitive pairing of legendary screen team Bogie and Bacall.

It was added to the National Film Registry in 1997.

Leaves HBO Max at the end of August. Add to My List on HBO Max

, iTunes, Vudu, GooglePlay and/or other services. Availability may vary by service.
The Big Sleep [Blu-ray]

The Warner DVD and Warner Archive Blu-ray features both versions of the film plus a featurette that examines the differences in detail. The contrast between the two versions is illuminating—the first version hews closer to the mystery, but the second version is electric and takes the film into a whole new realm of hard-boiled romance—and the featurette shows just how a professional makes the most of two charismatic stars.