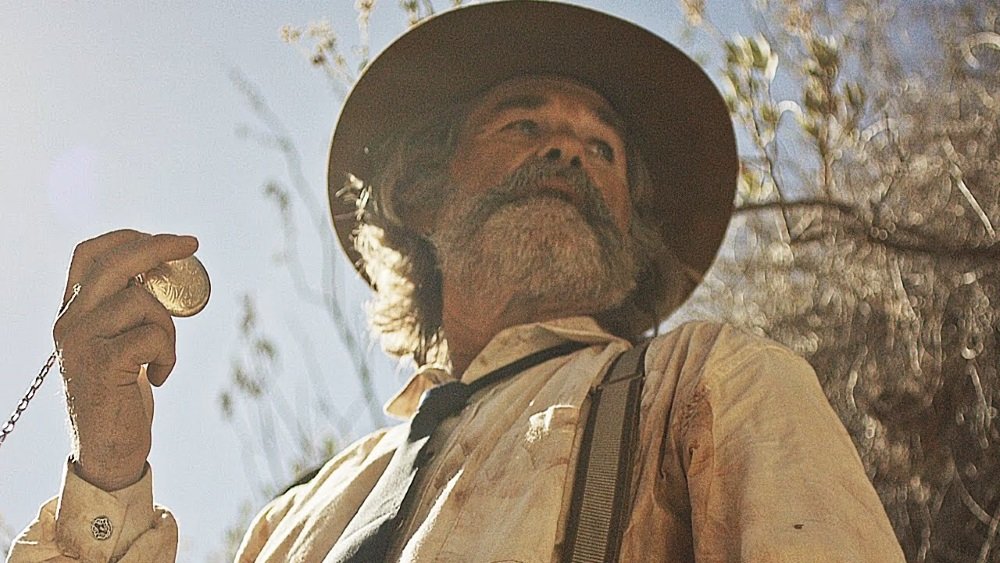 Bone Tomahawk (2015), the other 2015 western starring Kurt Russell, is no knock-off created to cash in on Tarantino’s The Hateful Eight. The feature debut by writer / director S. Craig Zahler is a sturdy frontier western about strong but decidedly mortal settlers who take the responsibilities of community seriously, and its odyssey takes them to the border of horror cinema without leaving its frontier drama landscape or sensibility.

Russell is Sheriff Franklin Hunt, the aging lawman of a small, mostly peaceful town that is rocked when a deputy and a doctor (Lili Simmons), the wife of an injured cowboy, are kidnapped in a guerilla raid on the local jail. His rather small posse consists of his back-up deputy Chicory (Richard Jenkins in the chatty Walter Brennan role), an erudite gunman with a particular hatred of the Indians (Matthew Fox), and the injured husband (Patrick Wilson), enduring a fractured leg that becomes gangrenous along the way. Even the local tribes don’t recognize the renegade tribe as Indian—they are troglodytes, according the town’s only Native American representative, cave dwellers that have turned to cannibalism—and that’s where the horror creeps into the drama.

Zahler takes his time—the film lopes along for more than two hours—and favors the rhythms and evocative dialogue of a frontier drama. For all the urgency of the posse’s mission, it’s a journey of days through the desert and the characters fill the time with defining personalities: the easy-going affability of Sheriff Hunt that becomes sharpened by the focus of tracking the raiding party, the garrulous way that Chicory talks, like a lonely old man trying to be useful (“It’s the opinion of the back-up deputy that…”), the arrogance and urbane language of the educated townsman whose character recalls the gamblers of classic westerns but whose backstory reveals different tale, the resolute determination of the cowboy husband who will not shirk his duty despite the crippling ordeal. It’s something like a western story song with gruesome twist.

There’s a gruesome edge to it in the opening, a prologue featuring David Arquette and Sid Haig as cutthroats who run into the savage tribe, and in the final act, where the tribe’s sadistic brutality is shocking even this age of cinema violence. But Zahler doesn’t revel on the violent spectacle. It flirts with horror but remains rooted in the physical frontier world and grounded in character, both of which Zahler sculpts with a richness of texture and detail that makes it live and breathe.