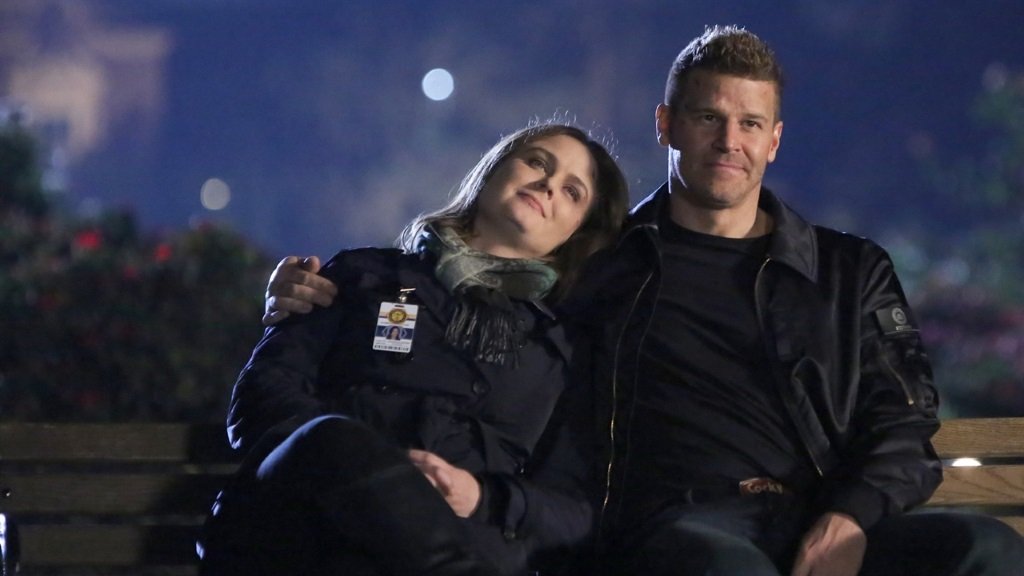 Bones (2005-2017) came to an end in early 2017 after twelve years and 245 episodes: an impressive run by any measure. The high concept crime show was never hailed as the best or most original show on TV—it was one of the better of the myriad of procedurals built around the unique talents of a brilliant mind whose area of expertise invariably becomes the key to unlocking the mystery at hand—but it struck that perfect alchemy of fun characters, snappy dialogue, murder mystery complications, gooey forensics and, most important, screen chemistry bonded to perfection that most television never approaches.

Emily Deschanel is world-class anthropologist Dr. Temperance Brennan, resident genius at The Jeffersonian, the show’s stand-in for The Smithsonian. David Boreanaz is FBI Special Agent Sealy Booth, who is teamed with Brennan in the first episode in a partnership that almost crashes and burns halfway through their first case. By the end of the episode they evolve to grudging respect.

Booth calls Brennan “Bones” first as a cheeky slight, then as an affectionate nickname, and finally a term of endearment. They were the classic odd couple buddy partnership, the practical detective with a savvy understanding of people and the scientific genius devoted to empirical evidence, colliding and collaborating through each investigation. The mix of high-concept forensic science and classic cop show partnership of opposites settled into its rhythm quickly, as much workplace dramedy as detective show, playful and affectionate and built on the chemistry of a core ensemble that has remained remarkably stable over the course of twelve seasons. And over time, behind the technology geek-out, horror film viscera effects played for gross-out humor, and investigations through quirky social subcultures, Bones developed into the greatest love story on TV.

The show really came into its own in the second season, when Tamara Taylor joined the cast as Dr. Camille Saroyan, head of the Jeffersonian forensics team, aka the squints. She took over a team that includes Dr. Jack Hodgins (T.J. Thyne), the bugs and slime guy; Angela Montenegro (Michaela Conlin), resident artist and computer tech guru; and Zack Addy (Eric Millegan), Brennan’s star student and intern. When Dr. Lance Sweets (John Francis Daley) arrives in the third season as an FBI psychiatrist assigned to monitor their partnership with scheduled sessions, what could have been an awkward narrative device blossomed into a part of the screen family. And if the series is about anything it is about family. By the time the show ended, it gave us three marriages, four babies, the deaths of three loved ones, a crippling accident, untold romances, and finally the creation of three loving families within the unconventional family they created among themselves.

The show had a tendency to trip over itself when confronting truly dark villains, from the Gormogon of Season Three (a cannibal serial killer rooted in an ancient secret society) to evil genius Christopher Pelant (for whom matching wits with Brennan is a form of courtship that includes ritual sacrifice). But at heart it was a jaunty, colorful, lighthearted procedural grounded in the camaraderie of a spirited team of eccentric “squinterns” and criminal investigation professionals. All in the body-of-the-week mystery format built around decomposing remains displayed on primetime TV with a mix of gross-out humor and laboratory distance, and stories that sent them into quirky subcultures, everything from competitive arcade gamers to tornado chasers to seasonal Santa Claus portrayers to college acapella groups.

The final season is something of a valedictory lap, bringing back favorite recurring characters for a final visit, from Brennan’s father Max (Ryan O’Neal) to her first serious romantic partner Tim Sullivan (Eddie McClintock) to the delightful Dr. Gordon Wyatt (Stephen Fry) and Cyndi Lauper’s psychic Avalon Harmonia, and bringing closure to the troubled story of Zack Addy. This is the only time I could imagine reviving the Gormogon story for anything positive.

And the series ends as it should. Not the obsessive killer going after Booth and/or Brennan, mind you. I mean the team coming together to meet a challenge: the collaboration between professions, the support of friends, the loyalty of a family forged in common cause. The final episode is titled “The End in the End” but it’s an end that brings up the past and the shared experiences that made these characters who they are, and it’s an end that affirms a continuity and embraces a sense of healing.

For more, read my appreciation of and tribute to the series at Vulture.

Add to My Stuff on Hulu or add to My Watchlist on Amazon Freevee, which is free with limited ads.

, iTunes, GooglePlay and/or other services. Availability may vary by service.
Bones The Complete Series (Seasons 1-12) [DVD]

Fox Home Video presents the the series in individual season releases on DVD and season 4 through 8 on Blu-ray, Bones: The Flesh and Bones Collection (Fox) which boxes up the entire 12-season run on DVD only.

Bones: The Flesh and Bones Collection presents all 245 episodes in a collection that boxes up every previously-released season in a hefty package. There’s no material original to this set but it does feature all of the supplements from over the years: commentary on select episodes over the series, numerous featurettes (including behind-the scenes of the 200th episode), the cast and creators at Comic-Con panel.