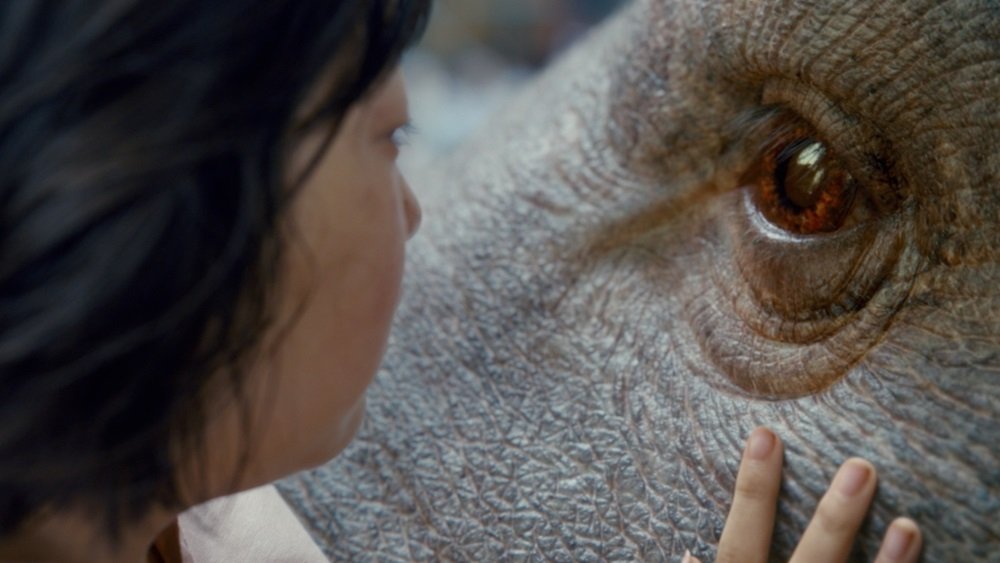 Okja, a social satire/political allegory/action fantasy from Korean filmmaker Bong Joon-ho, skips theaters entirely to debut on Netflix. You may recall that it was a point of controversy at the Cannes Film Festival, not for its subject matter but because of the Netflix model of releasing its films straight to streaming. The Netflix logo elicited boos from the audience but by the end it earned a standing ovation.

Bong’s follow-up to Snowpiercer (2013) is just as committed to its metaphors, this one satirizing corporate power, public relations stunts, and the unappetizing truth about where our food comes from. Okja is a particularly adorable offspring of a super pig ostensibly discovered in the mountains of Chile (that’s the first line of PR distraction), one of a couple dozen super piglets sent to farmers around to raise for a kind of porcine beauty contest: some pig! It’s also the best friend of Mija (Ahn Seo-hyun), an adolescent orphan South Korean girl who leaves her mountain farm to rescue Okja from the corporate maw with the help of the Animal Liberation Front and their painfully earnest and super-committed non-violent leader (Paul Dano) and ends up part of the pageant unfolding in New York City.

Okja is a magnificent CGI creation, like a hippopotamus by way of a puppy, big and spirited and affectionate and bounding around with all the grace of an overexcited toddler. She’s all heart and emotion, in sharp contrast to the corporate team who sees her as product. Tilda Swinton plays the PR-focused head of a hated multinational preparing the roll-out of her new eco-friendly meat as well as her twin sister, playing both parts to the hilt: the desperate-to-be-loved daughter committed to changing the image of what was once a munitions giant and her the heartless, bottom-line capitalist who doesn’t give a damn what the world thinks about her as long as she turns a profit.

It’s a riot of shifting tones, bouncing from adorable girl-and-her-pet comedy to rescue action thriller to over-the-top satire to startlingly affecting slaughterhouse horror. It’s not bloody or explicit but watching these sweet, loyal creature lining up to serve the nation’s demand for burgers, hot dogs, and steaks may be enough to make a child go vegetarian, or at least turn against the inhuman practices of factory-raised meat. It’s also funny and wild and energetic, wound through with lively caricatures and committed performances (including one from Jake Gyllenhaal as a TV animal show host that is pure cartoon) and a moment or two of heartbreak. Co-stars Steven Yeun, Lily Collins, Shirley Henderson, and Giancarlo Esposito as a cunning corporate lieutenant.