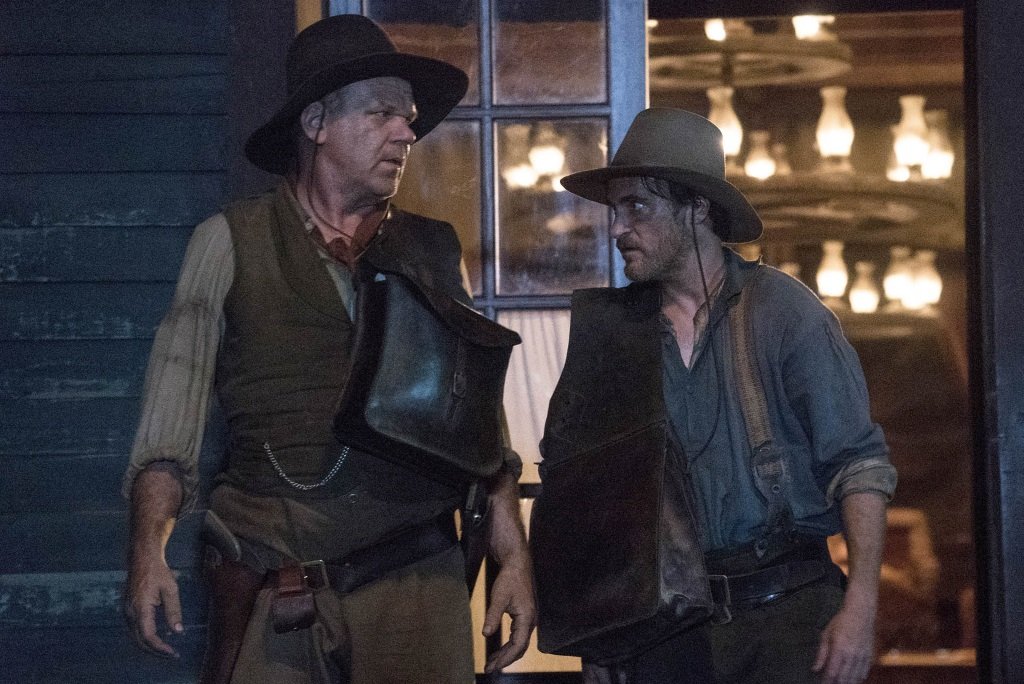 John C. Reilly and Joaquin Phoenix are frontier assassins in the offbeat western The Sisters Brothers (2018, R), adapted from the cult novel by Patrick Dewitt and directed by award-winning filmmaker Jacques Audiard. Streaming on Hulu.

Quentin Tarantino’s The Hateful Eight (2015, R), an epic widescreen western in the intimate quarters of a stagecoach stopover during a blizzard, is filled with violence, cruelty, racism, and the storytelling verve and narrative twists that have made Tarantino’s reputation. Samuel L. Jackson and Walton Goggins stand out is a terrific cast that also includes Kurt Russell, Jenifer Jason Leigh, and Tim Roth. Netflix presents an extended version of the film as a four-part miniseries.

I Think You Should Leave with Tim Robinson: Season 1 is an original sketch comedy written by and starring the “Saturday Night Live” veteran with guest appearances by many of his old cast mates. Streaming on Netflix.

Classic pick: John Wayne is Hondo (1953), a Cavalry scout who falls in love with an abandoned homesteader and mother (Geraldine Page) while a frontier war heats up around them, in one of Wayne’s best westerns. Streaming on Amazon Prime Video.

The Sapphires (2012, PG-13) stars Chris O’Dowd as an Irish entertainer who turns an Australian aboriginal sister act into a powerhouse pop group performing for American soldiers in Vietnam in the sixties. Also new:

True stories: Grass is Greener (2019, TV-MA) explores America’s complicated relationship with marijuana and the racially-charged roots of the war on drugs. Also new:

Unexpected (2015, R) stars Cobie Smulders as an unmarried high school teacher who becomes pregnant at the same time as one of her most promising young students (Gail Bean).

Streaming TV: Aidan Gillen and Charlie Hunnam star in the original Queer as Folk: Complete Series (1999-2000), the groundbreaking series created by Russell T. Davies about the lives of young gay men in Manchester.

Foreign affairs: Kim Ji-Woon’s violent gangster thriller A Bittersweet Life (South Korea, 2005, with subtitles) is a stylish yet dispassionate lament of mutual destruction in the key of doom.

Also new: coming of age drama All These Small Moments (2018, not rated) with Molly Ringwald and Jemima Kirke;

The Next Three Days (2010, PG-13) stars Russell Crowe as a husband who breaks his wife (Elizabeth Banks) out of prison when she is wrongly convicted of murder (Prime Video and Hulu).

Border (Sweden, 2018, R, with subtitles), a dark fairy tale about a border agent who can “smell” guilt, was an Oscar nominee in the foreign film category.

Spike Lee’s BlacKkKlansman (2018, R), a savvy take on the true story of a black police officer (John David Washington) who infiltrated the Ku Klux Klan in 1970s Colorado, is provocative, satirical, angry, irreverent, outraged, and very timely, and it earned Lee an Oscar (his first) for the screenplay.

Suranne Jones is Anne Lister, aka Gentleman Jack, in the new HBO coproduction with BBC inspired by a true story. New episodes each Monday.

Celebrate Shakespeare’s birthday with the all-star BBC special Shakespeare Live! (2016) from the stage of the Royal Shakespearean Theater in Stratford-upon-Avon with hosts David Tennant and Catherine Tate and a guest list that includes Benedict Cumberbatch, Judi Dench, Ian McKellen, and Helen Mirren.

Also new are BBC productions of A Midsummer Nights Dream (2016) with Maxine Peake and John Hannah and Measure for Measure (2004) with Mark Rylance.