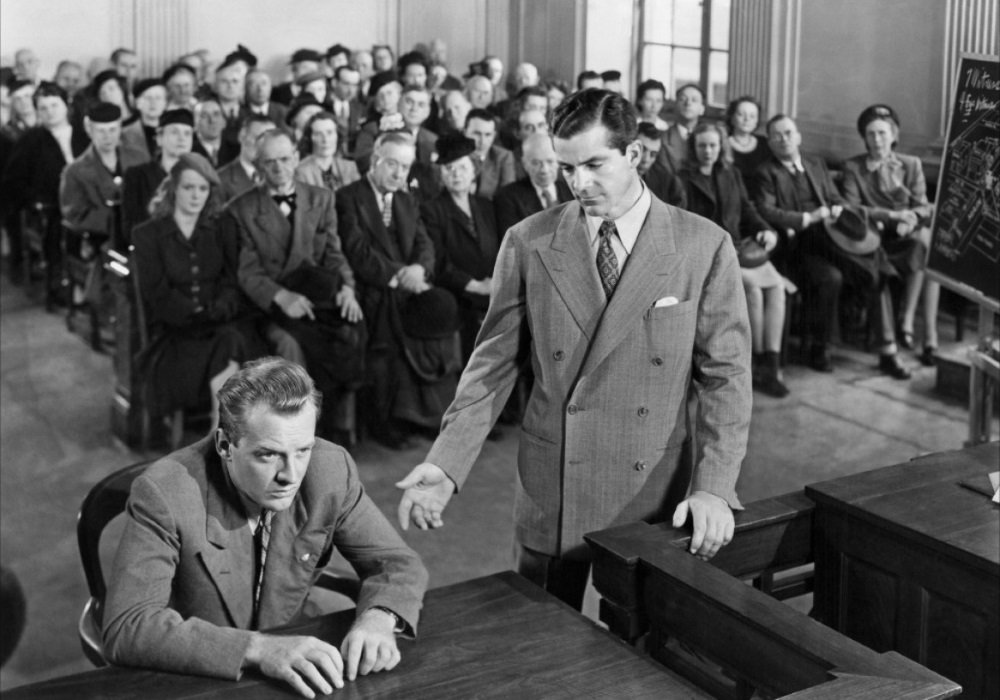 Boomerang (1947) picked up the semi-documentary strain of American crime drama that was born in the 1945 The House on 92nd Street and improved upon the original.

Produced by Louis de Rochement and narrated by the disembodied voice of Reed Hadley insisting that the events portrayed here occurred in a small Connecticut town “but it could have happened anywhere,” it is directed by Elia Kazan, who brings a focus on the performances and the social culture of the town. That voice of authority is ostensibly there to assure us that the public servants have everything in hand but the film, which turns from everytown American portrait to crime thriller with the point-black murder of a beloved priest, reveals otherwise.

The story follows the public pressure on the police after the shocking murder (and the scene is shocking and startling without ever showing the deed) and the political pressure on the State’s Attorney Henry Harvey (Dana Andrews) to bring a speedy indictment to their only suspect, a drifter played by Arthur Kennedy. His character is another of the returning veterans who came home after serving his country and found nothing waiting for him but dead end jobs and a grinding existence, and his fumbling response to the questions basically damns him in the eyes of the police, who have picked him up on circumstantial evidence.

Lee J. Cobb is the solid cop swayed by the preponderance of evidence over his gut feeling. He thinks something isn’t right but shrugs it off after Kennedy signs the confession, exhausted and emotionally depleted after hours of interrogation. There been no beating, but the constant verbal and emotional assault wears him down. In one of the film’s most touching moments, he carries the exhausted suspect after a confession is signed, a moment of pure kindness. Jane Wyman is second billed but has little screen time and even less narrative importance as Andrews’ wife.

Like other films in the movement, it eases the chiaroscuro lighting of films like I Wake Up Screaming for more of a naturalistic look, and focuses on procedure and details over violence and action. This one spends most of the final act in the courtroom, and even there it defies expectation with a very measured effort by State’s Attorney Harvey as he lays out the issues in the case against the defendant, yet Kazan avoids the usual theatrics as Andrews, who loosens up a little under Kazan’s direction, methodically works his way through his case with a modesty rare even in today’s spate of TV legal dramas. It’s more film gray than noir, with the undercurrent of political pragmatism and shady business dealings behind the pose of jurisprudence. The “reform party” swept in with a promise of, well, reform, but under the hammerblows of newspaper headlines turning the case into the 1940 equivalent of clickbait, they don’t seem all that reformed. Not that the fourth estate comes off much better.

“This case was never solved,” informs our voice of authority, but we still get the Production Code-mandated ending suggesting that the guilty man—or at least, the man we assume to be guilty, given the circumstantial evidence slipped conspicuously into the drama—receives punishment. It’s the kind of assurance that studios liked to peg on the end of crime dramas and thrillers but it hardly sweeps away the portrait of outright corruption and insidious political machinations that Kazan reveals along the away.

Also on Blu-ray and DVD and on SVOD through Amazon Video, iTunes, GooglePlay, Vudu and/or other services. Availability may vary by service.
Boomerang [Blu-ray]

On Blu-ray from Kino Classics and on DVD from Fox. Kino’s disc brings out both the gray scale and the noir night scenes beautifully, with brief mottling at a couple of points but otherwise clean and crisp. Kino offers a newly recorded commentary track by Noir City Sentinel contributor Imogen Sara Smith (it’s her first commentary and she makes a fine and confident debut with an informative talk), plus commentary by film noir historians Alain Silver and James Ursini carried over from the 2006 DVD release, a terrific balance of historical backstory and informed observation, all in the easy-going, conversational give-and-take of longtime collaborators. Note that the back cover of the slipsleeve art includes a factually incorrect plot description (it describes two suspects and the efforts of the State Attorney “to prove one suspect’s innocence and the other’s guilt,” but there is no second suspect in the film) and a still from Whirlpool featuring actors Richard Conte and Charles Bickford. This is all cosmetics, mind you. I just want you to know that yes, I’m aware of the errors.