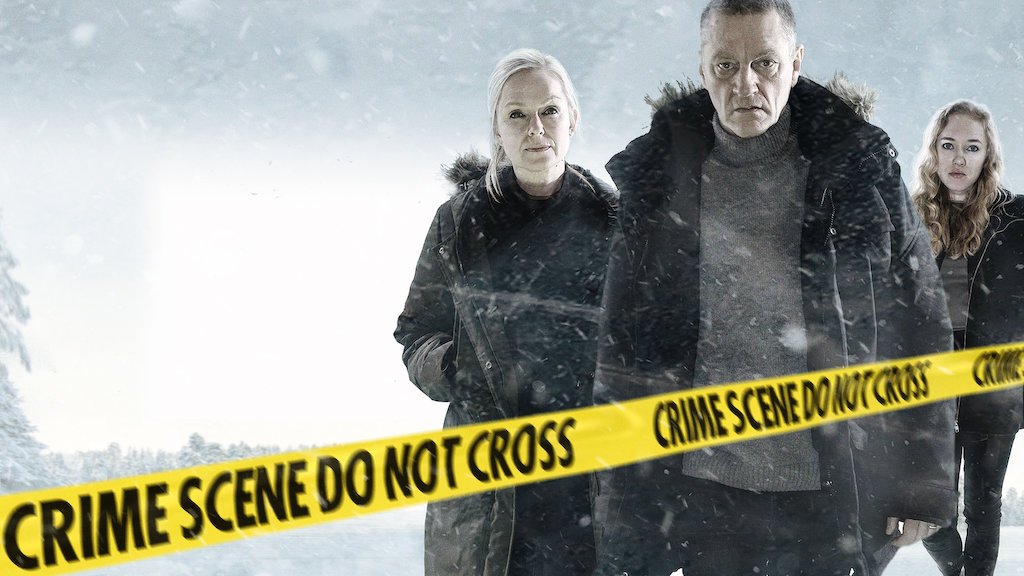 Bordertown: Complete Series (Finland, 2016-2021) opens with Brilliant investigator Kari Sorjonen (Ville Virtanen) leaving his position in the special crimes unit of Finland’s National Bureau of Investigation to move his family from the bustling city of Helsinki to Lappeenranta, a small coastal city near the Russian border.

He’s taken a job heading a new Serious Crimes unit of the town’s police force to spend more time with his wife Pauliina (Matleena Kuusniemi), who is recovering from treatment for brain cancer, and his teenage daughter Janina (Olivia Ainali). In the tradition of such crime dramas, however, this rural location becomes a focal point for corruption, crime, and murder, much of it connected with the Russian city of St. Petersburg across the border.

Detective Inspector Kari Sorjonen follows in a long tradition of savant detectives; he’s eccentric, brilliant, obsessive, better with evidence than navigating social situations. But as created by Miikko Oikkonen, he’s also complex and nuanced: a devoted husband and a protective father who knows how cases can take over his life and struggles to maintain a balance, a leader who stands up for his team, a man with Asperger syndrome (never explicitly stated in the show but illustrated in his behavior and backstory) who has developed tools to deal with it. That complexity, along with the vivid, committed performance by actor Ville Virtanen (whose body language is as expressive as the writing), makes him a compelling character.

The first mystery also introduces Lena Jaakkola (Anu Sinisalo), a Russian FSB agent who has gone rogue to find her daughter Katia (Lenita Susi), a teenage runaway caught up in a sex trafficking ring that is tangled in Kari’s murder investigation. Kari respects Lena’s talents (even when she ignores protocols and legalities) and her commitment to her daughter, and he campaigns to hire Lena for his team. She makes a marvelous counterpoint to Kari, impulsive and cynical and willing to break the law for her mission, and her troubled relationship with her rebellious daughter Katia is an echo of Kari’s struggles to connect with his own daughter.

Season Two opens with a crime that reaches back to a case that Lena worked on years ago in her days with the FSB, dredging up old wounds that involve her daughter Katia and bad blood with the Russian mob. Subsequent mysteries involve a conspiracy connected to a daycare center, a sniper targeting seemingly unconnected people in town, and a serial killer who may be involved in cannibalistic rituals, and the season ends with two petty criminals taking Kari and his family hostage. This season also adds a cliché common to many similar shows: a criminal mastermind who takes a personal interest in Kari and escapes to continue the battle of wits in a future season. But otherwise writer/creator Oikkonen keeps the show grounded in the culture of the fast-growing city and its uneasy mix of business, crime, and corruption.

The third and final season opens with a death and in the Sorjonen family and the struggle of those left behind. Under normal circumstances this would mean the character leaves the series but here the deceased returns as a kind of conscience, helping heal the distance between the survivors as they get lost in grief. Their journey back to being a family, and the parallel drama of Lena and her increasingly independent daughter, become the thematic spine of the season. Just as central to the final season, however, is the return of the brilliant, vengeful killer, a Moriarty to Kari’s Holmes, and seems just as driven to show off his brilliance to Kari as he is to make the town pay for the crimes and betrayals of past industrialists and politicians. The mysteries that play out over the ten episodes are entwined in the corruption of the rapidly growing city near the Russian border. It gives the show its dark edge and it has become one of the most popular and acclaimed shows that have earned the nickname Nordic Noir.

Mysteries aside, it’s the personal drama that helped elevate the show to international acclaim. Bordertown deftly balances the personal and professional spheres of Kari and Lena while adding layers to the characters and their relationships, and Ville Virtanen centers the series with his richly realized performance as Kari Sorjonen. His tics and rituals become a defining part of his character, but Virtanen also shows how Kari struggles to compartmentalize the gifts that make him such a good detective.

The final episodes bring a close to the battle of wits and satisfying closure to the personal stories while leaving open the possibility of further mysteries. The show has come to end, at least for now, but a feature film spinoff has been announced.

There are 31 episodes over three seasons, with mysteries playing out across multiple episodes.

Rated TV-MA, in Finnish and Russian with English subtitles