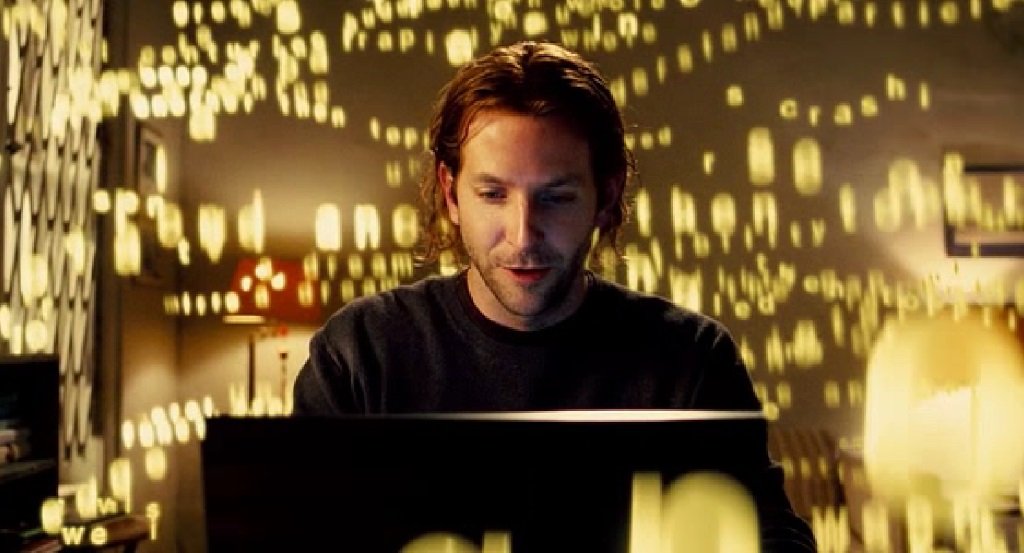 The premise behind Limitless (2011) is irresistible. How many times have we heard that we only consciously access 10% or so of our brains? Without complicated scientific blather, the film offers up a drug that gives the user access to the other 90%, making them more focused, more efficient, more perceptive, more creative, and, well, just more.

Which is just what happens when would-be novelist Eddie (Bradley Cooper) takes a sample of an experimental drug from a freelance pharmaceutical rep (think high-concept pusher) and immediately (and quite literally) cleans up his act.

Bradley Cooper was getting bigger roles but hadn’t broken through in 2010 so he developed the story (based on a novel by Alan Glynn) as a vehicle to show off his leading man chops. He’s perfect in the role of the slacker in a creative funk and motivational spiral who takes a hit of NZT and taps into all of his unused potential. His entire look, demeanor, body language changes when he’s on, a man suddenly in charge of himself and his world.

Director Neil Burger offers a slick shorthand for the rush of perception with a few simple tricks, enough to kick the film into overdrive for Eddie’s flights of uber-cognition. He’s confident, magnetic, engaged, and his eyes glow an incandescent blue. At one point he channels the Kennedys, a golden boy ready to take on the world with a smile, and Cooper really sells the image. And when he comes down, he crashes, becoming sloppy and stupid and depressed, which is a bad place to be when there are killers looking for this wonder drug that he’s managed to stash away.

It starts off as an addiction metaphor; the first dose is free and the addiction is both a matter of chasing the high of an experience junkie and of physical survival (withdrawal is a killer). But it also taps into dreams lost in the long haul of life, and youthful ambition and energy stirred back to life, and it shifts into a quasi-Philip K. Dick future-shock of corporate control through science with the drug coming at a price. Robert De Niro steps in to represent the corporate conspiracy.

The biggest price appears to be selling out for the basest of power grabs—money, political power—though even that is ostensibly a means to an end. It’s the endgame that’s a little vague. Well, a few things are vague, from basic story points to technical details, but it doesn’t unduly harsh this head trip. It’s not the science that’s important, it’s the momentum, the conceptual journey, the dynamism of the head games and chemically-enhanced battle of wits, and the laser-sharp performance by Cooper. Abbie Cornish and Anna Friel co-star.