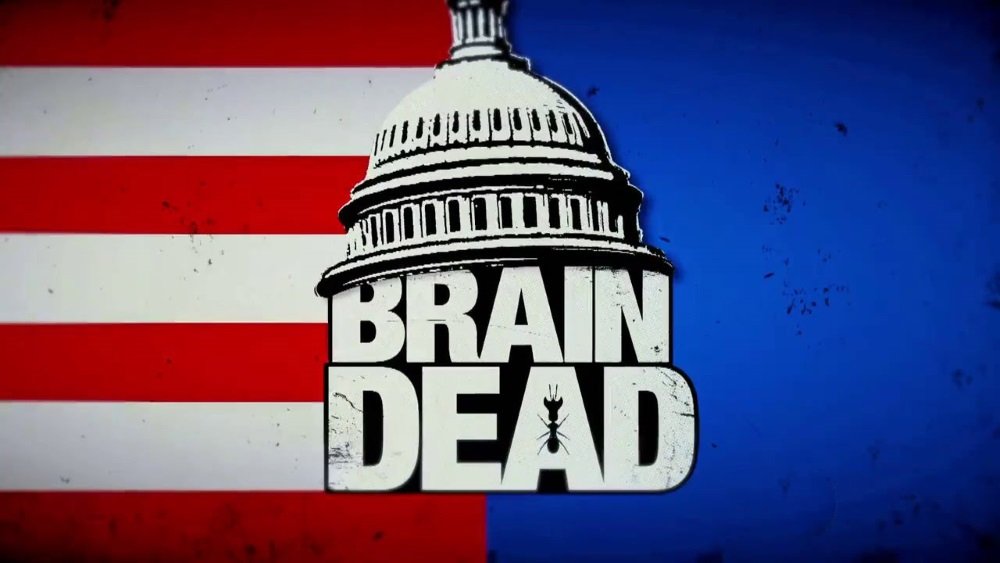 BrainDead (2016), created by Michelle King and Robert King (of The Good Wife) as a limited summer series, is a mix of mix of alien invasion thriller and political satire centered in Washington D.C., where an infestation of ant-like insects from outer space colonize the brains of politicians and government officials.

Mary Elizabeth Winstead stars as bleeding-heart liberal documentary filmmaker Laurel Healy, a political outsider who grudgingly takes a job on the staff of her brother, rising star Senator Luke Healy (Danny Pino), and stumbles across an unexpected explanation for the suddenly aggressive polarization between the two political parties. Which is part of the fun of the show: the invaders don’t hijack the politics of their hosts, they push them to the extremes, turning them into walking clichés of unthinking bullet-points, knee-jerk reactionaries spouting nonsense with the zeal of a firebrand activist. The spectacle is usually funny. When Tony Shalhoub, playing a boozy career Senator transformed into a health-conscious right-wing messiah, starts fabricating his absurdist sound-bite word salads with his dazed smile and attack-dog intensity, it is downright hysterical. He practically walks away with the show in his supporting role.

When the host resists, the results are messy: exploding heads and gooey brain matter splattered over the bystanders, all played for black humor. That’s how Laurel gets involved—she’s a bystander to one blowout—and she finds allies in conspiracy-minded eccentric speed chess genius Gustav (Johnny Ray Gill) and hospital CT scan tech Rochelle (Nikki M. James), who witnesses one of the headbombs in the midst of a scan. They should be more central characters but their characters are underdeveloped and their stories have a way of getting nudged to the side to focus on the political sideshow and on Laurel’s unexpected connection to Gareth (Aaron Tveit), the top aide to her brother’s Republican nemesis (Shalhoub). After lobbing volleys of dirty tricks back and forth, he becomes an unlikely ally in a very complicated (and very cute) romance.

It’s a tricky balance that the series doesn’t always manage—the exposition-heavy opening episodes are a bit flatfooted—but the show finds its footing pretty quickly. The second episode improves on the pilot right in the opening “previously on” recap, which is delivered in musical form by Jonathan Coulton. It’s funny and catchy and clever, capturing the mix of blithe silliness and snappy wit that the show finally lands around episode three or four and maintains through the rollercoaster conspiracy plot of budget battles, internment camps, hidden line-items, media grandstanding stunts, and cherry blossom season. The real-life election from the summer of 2016 plays in the background of the series, and the increasingly absurd political games seem less like a parody and more like a minor exaggeration of the real deal: the government shut-down, extreme polarization, unprecedented political behavior suddenly treated as acceptable. While the satire never cuts deeply, it is scarily effective how close their cartoonish outlandishness matches recent history, and frankly this show’s science fiction explanation is more satisfying than the messy truth of our own broken government.

The series was launched with the hope of subsequent seasons (Michelle and Robert King discussed their ideas for three follow-up seasons in a featurette on the DVD release) but it was cancelled after the one and only 2016 season. That’s too bad—I became quite fond of the show by the end—but it delivers a sense of narrative closure that makes it work just fine as a limited series.

and other services. Availability may vary by service.
BrainDead: Season One [DVD]