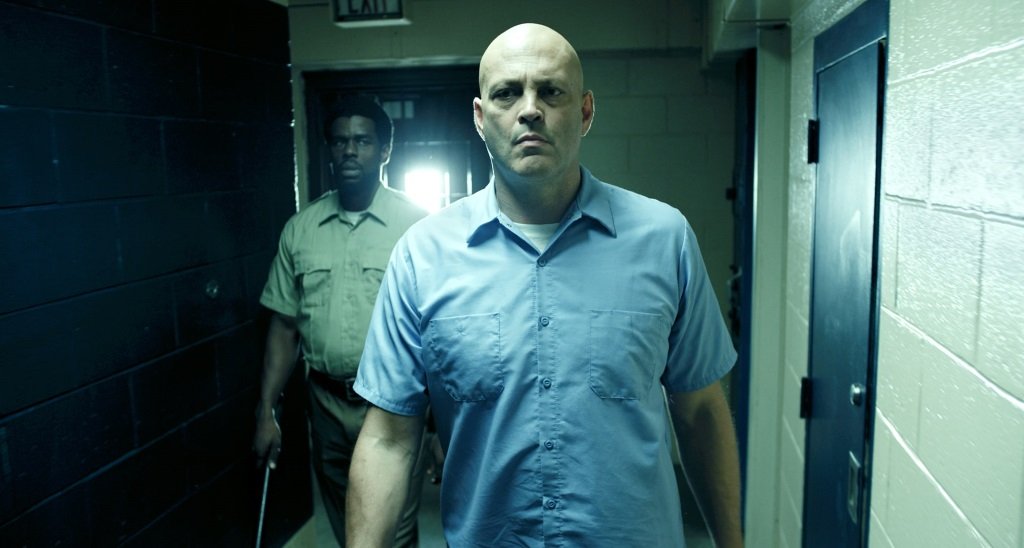 Brawl in Cellblock 99 (2017) is my pick for the smartest piece of cinematic pulp fiction in 2017. It didn’t draw audiences to theaters, perhaps due to the extremes of the violent action. But if it lacks the elaborate choreography and martial grace of John Wick (by design), it more than makes up for it in the explosiveness of the action and the punch of raw brutality in the violence. Even when that violence is simply a means to an end, it feels personal.

Vince Vaughn, best known as a comic actor, bulks up to play Bradley, a former drug courier trying to stay straight, but when he loses his job and finds his wife (Jennifer Carpenter) having an affair, he just about loses it. Bradley is a sober alcoholic with anger issues and a capacity for violence and he knows it, and Vaughn shows an actorly intelligence as a self-aware man struggling (and succeeding) to keep his violence in check. That self-control, and commitment to his marriage in the face of infidelity, makes us root for Bradley even as he returns to the drug trade. He’s a smart man with great instincts and a moral code, which ultimately lands him in prison after working with a reckless crew that has no such restraint, and that’s where the dramatic screws are put to Bradley: he’s ordered to kill a man in maximum security to save the life of his wife and unborn child. It’s a job that calls on the capacity for violence he’s kept in check all these years as well as his mental focus and physical discipline.

Don Johnson plays as the brutal warden who runs his prison like a private dungeon and takes particular delight in inflicting punishment on Bradley as the inmate literally fights his way through the levels of this particular hell to find the real story behind his assignment. He invests the genre caricature with a good ol’ boy swagger and a larger than life gusto. Udo Kier adds a nice edge of weirdness as the professional sadist who kidnaps Bradley’s pregnant wife and Marc Blucas and Clark Johnson co-star (as the easy-going drug kingpin Bradley works for and the cop who interrogates Bradley, respectively).

It’s written and directed by S. Craig Zahler, who made Bone Tomahawk, an unusual western with a horrific twist, and is as brutal as the title suggests. Bones are snapped, bodies broken, flesh beaten, and heads crushed to a bloody pulp pulp, and Zahler puts it all on the screen in sharp close-up and gory detail that will make the hardiest action movie veteran wince. It could have turned into a lurid spectacle but it’s also an intelligently-made crime thriller with a strong performance from Vaughn and a script that grounds the violence in emotion and devotion. It’s not about survival, it’s about protecting those you love, and Zahler uses pulp conventions to tell a brutal story rooted in character, sacrifice, and love.

Not rated, features explicit and brutal violence and foul language.

, iTunes, GooglePlay and/or other services. Availability may vary by service.
Brawl In Cell Block 99 [Blu-ray]

The Blu-ray and DVD from RLJE Films includes the 15-minute featurette “Journey to the Brawl: The Making of Brawl in Cell Block 99” and an audience Q&A with filmmaker Zahler and the cast at a screening at Beyond Fest.