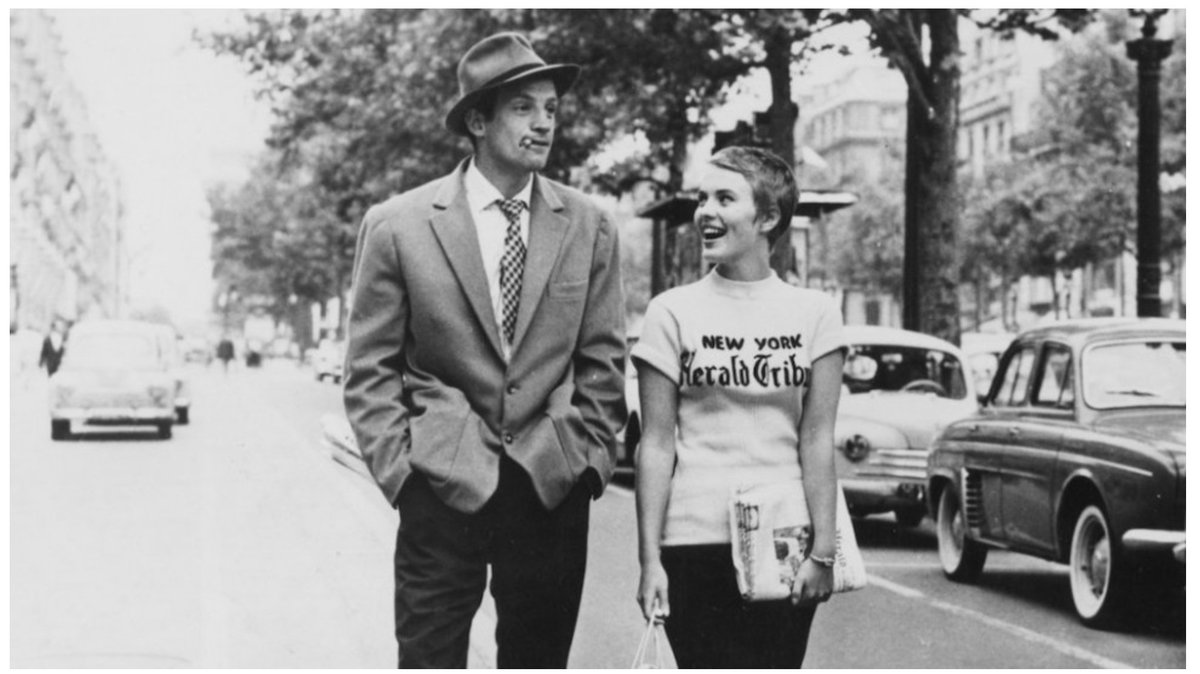 Breathless (France, 1960), Jean-Luc Godard’s feature debut, was a cinematic blast across the bow of the French filmmaking and international cinema.

Jean-Paul Belmondo stars the charming rogue of a street thug who kills a cop in a car theft getaway and stops off in Paris to get his payoff from his criminal cohorts and to woo his American girl (Jean Seberg in a career remaking performance) into coming with him to Italy.

A former boxer who wears his past on the mashed-up nose on his face, Belmondo was a young stage actor taking his first big screen lead and his loose, swaggering performance and rakish insouciance gives his antihero character an electrifying presence. It turns his character, a small-time gangster who models himself on movie stars like Humphrey Bogart, into the perfect lead for Godard’s debut movie.

Dedicated to Monogram films, Breathless (originally released in France under the name À bout de souffle) is Godard’s B-movie tribute, a crime movie taken apart and rebuilt from the ground up. In 1960, his free spirited street shooting, jagged editing, audacious jump-cuts, and lighthearted comic asides created a revolutionary sense of self-awareness: a movie as much about the fact that it’s a movie as anything going on in the story. It also gives the film a kind of energy new to the cinema.

Friend and fellow film critic-turned-filmmaker François Truffaut is given credit for the original scenario, though that was in part to assure financiers, and maverick director Jean-Pierre Melville, a hero to the Nouvelle Vague filmmakers, takes a supporting role, a kind of show of faith in a fellow maverick. Cinematographer Raoul Coutard went on to shoot over a dozen more films for Godard.

Seen today, decades after Godard’s innovations were picked up by other filmmakers and slowly brought into the mainstream, it plays like a work of visual jazz, rough and improvisatory and full of marvelous solos and quotes. And as far as I’m concerned, it stands as the definitive expression of the spirit of the burgeoning Nouvelle Vague.

In black and white, in French with English subtitles

Add to My List on HBO Max or to My List on Criterion Channel or see it free on Kanopy, which is available through most public and college library systems.

The film was restored for the Criterion Collection special editions on Blu-ray and DVD. The feature documentary “Chambre 12, Hotel du Suede,” made for French TV in 1993, is a first person documentary structured like a private eye movie. The conceit is a bit precious, but the wealth of information, the amazing array of subjects who were present on the set of the film, and the willingness of the director to entertain the sometimes conflicting testimony (the conflicting perspectives are, in many ways, the truth of the matter), makes this production irresistible. The title, by the way, is the address of actual hotel room where Godard shot the hotel room scenes. “Charlotte at Son Jules” is Godard’s 1959 lark of a short and his first collaboration with Jean-Paul Belmondo.