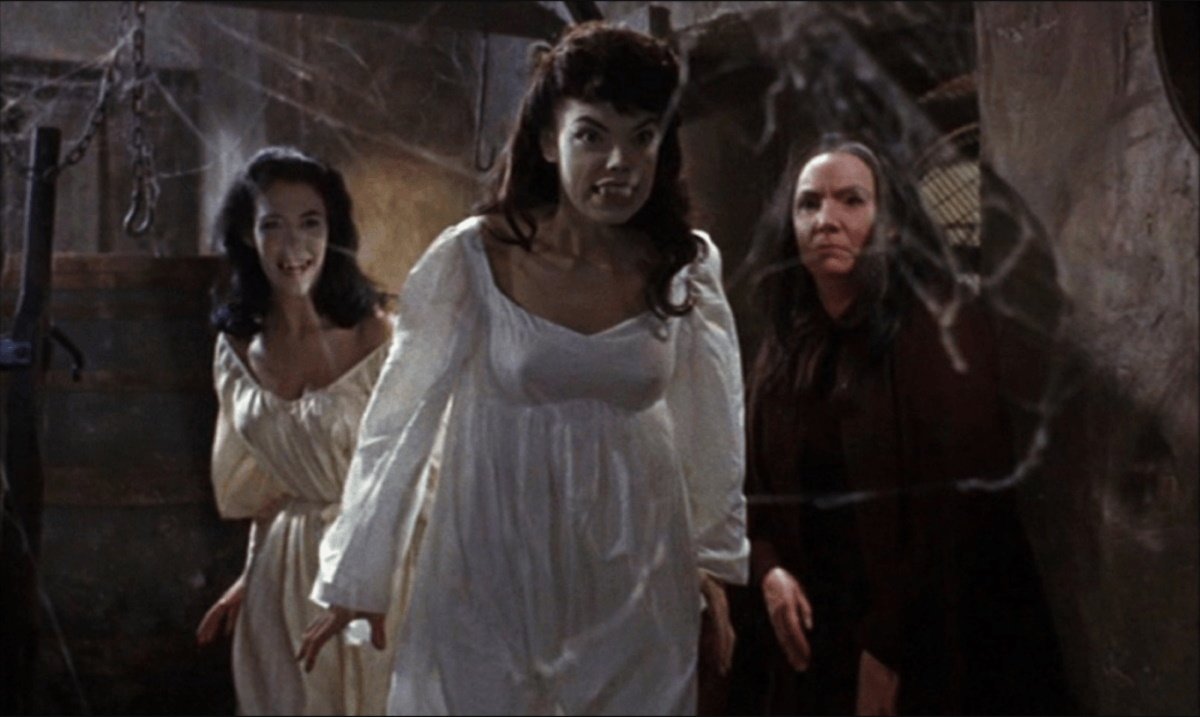 When Christopher Lee declined to reprise his role as Count Dracula in Brides of Dracula (1960), the sequel to the enormously popular The Horror of Dracula, Hammer went another direction and instead followed the investigations of vampire hunter Van Helsing (Peter Cushing).

He doesn’t actually appear until the second act, after French schoolteacher Marianne (Yvonne Monlaur, a big eyed, thick-lipped, curvy young beauty in the Brigitte Bardot mold) inadvertently releases Baron Meinster (David Peel), a young disciple of Dracula, from his castle prison in a cursed mountain village. This handsome vampire bites his way through bevy of glamorous beauties in low cut blouses and frilly nightgowns as he woos his sexy savior, while Van Helsing relentlessly tracks him back to Marianne.

Director Terence Fisher, working from a rather convoluted (and at times incomprehensible) script, makes his mark through a series of marvelous set pieces. In one of the most memorable a twisted old woman plays midwife to a reborn undead, coaxing her out of the ground as hands push up through the earth. And in one harrowing moment Van Helsing uses holy water and a red hot branding iron as a unique cure for a vampire bite.

Cushing is his usual dashing self, more than making up for the handsome but hardly commanding Peel, and you might recognized Marita Hunt, who played Miss Haversham in David Lean’s classic Great Expectations, as the withered The Baroness. Freda Jackson costars and Marie Devereux and Andree Melly make quite an impression as two of the undead brides.

Christopher Lee returned as the Count in Dracula: Prince of Darkness (1966) where Peter Cushing’s Van Helsing is notably absent.

Also on Blu-ray and DVD and on SVOD through Amazon Video, iTunes, GooglePlay, Vudu and/or other services. Availability may vary by service.
Brides of Dracula [Blu-ray]
The Hammer Horror Series (Brides of Dracula / Curse of the Werewolf / Phantom of the Opera / Paranoiac / Kiss of the Vampire / Nightmare / Night Creatures / Evil of Frankenstein) [DVD]