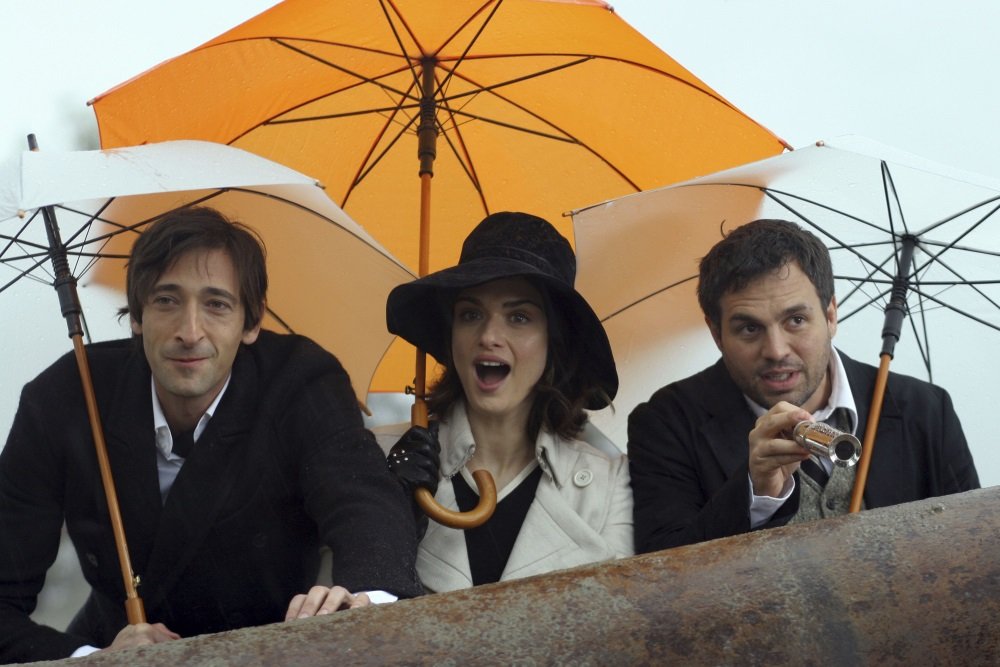 The Brothers Bloom (2008), the second feature from Star Wars: The Last Jedi writer/director Rian Johnson, is a con artist comedy as living theater. After the almost color-leached images of his high-school noir Brick (2005), Johnson puts more brightness in his palette and more spring his step for this fantasy about stories and storytelling.

In a way, each con is a little play mounted by elder brother Stephen (Mark Ruffalo), who “writes cons like Russians write novels, full of story arcs and symbolism,” to give his younger brother Bloom (Adrien Brody) the role of the romantic leading man, a part he’s too paralyzed to play in real life. Not that there is much real life in this bright little comedy, from the bouncy backstory of orphan brothers perfecting their craft as mischievous kids with brimming imaginations to the globe-trotting con that sweeps their current mark, the madcap but lonely New Jersey heiress Penelope (Rachel Weisz), into some very improbable scrapes and escapes. Oh yes, there is also their “fifth Beatle,” Bang Bang (Rinko Kikuchi), an explosives expert who lets her nitro do the talking for her (her silent comedy performance is hilarious).

It’s a charming fantasy of a con movie that is less interested in the well-played con than the colorfully executed idea of a con, among other things. It’s a film with more ideas than it can successfully juggle and it doesn’t really make sense but it does have a good time playing out its stories. Weisz plays Penelope as a real screwball heroine, all gumption and impulse and eager abandon, another dream girl to fall into Bloom’s arms and a romance with an expiration date: when the con is over, so is the stage romance. Stephen scripts Bloom as a tragic anti-hero, but Penelope, as much a storyteller as Stephen and a play actor as Bloom, does some improvising of her own (in true screwball fashion), and she just may be the rewrite he’s been waiting for.

Leaves Amazon and Hulu at the end of September, 2018. Add to Amazon watchlist or watch it on Hulu

, iTunes, GooglePlay and/or other services. Availability may vary by service.
The Brothers Bloom [Blu-ray]

The Blu-ray and DVD editions from Lionsgate includes commentary by director Rian Johnson and producer Ram Bergman, two making-of featurettes and over 35 minutes of deleted scenes.