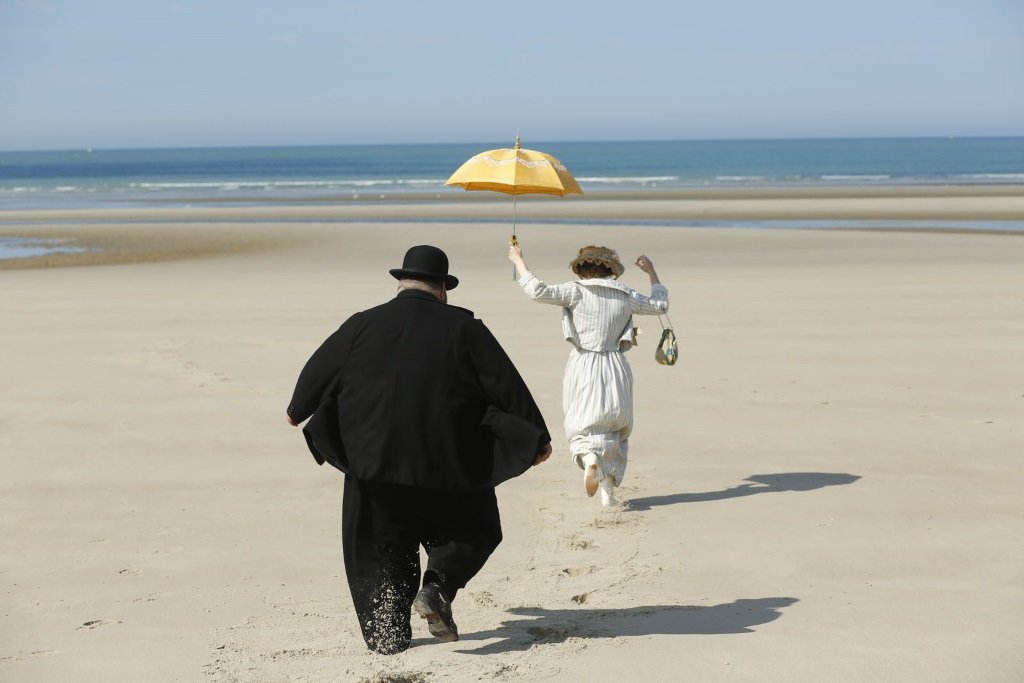 Bruno Dumont, once the chronicler of misery, alienation, and violence in rural France, has become a director of odd comedies with dark edges, first with the miniseries Li’l Quinquin and now Slack Bay (France, 2016).

Slack Bay is set on the coast of Northern France in 1910, where the eccentric and wealthy Van Peteghem family arrives to spend the summer on their vacation beach manor and the local Brufort family gets by digging for mussels at low tide and providing transportation for the tourists through the marshes and across the bay.

While the condescending, oblivious Van Peteghem adults keep their distance from the locals, teenagers Billie Van Peteghem (Raph), who has close cropped hair and alternately dresses as a boy or dons a wig and a dress like a girl, and Ma Loute Brufort (Brandon Lavieville) start seeing one another, much to the alarm of Billie’s melodramatic mother (Juliette Binoche). Meanwhile a pair of comic cops, a Laurel and Hardy pair that bumble around and as the rotund lead detective pratfalls in slapstick gags, investigate the disappearance of tourists. Dumont directs with a sense of whimsy, only becoming serious as it explores the relationship between the teenage characters.

Dumont casts major French stars as the Van Peteghem adults— Fabrice Luchini as the hunchback father with an odd, loping walk out of a lost Monty Python sketch, Valeria Bruni Tedeschi as his nervous, hysterical mother given to hair-trigger outbursts, and Binoche as his flighty sister determined to be the center of attention, all playing their roles in big, broad performances—and non-actors as the locals. It creates quite a contrast, with the pros going into eccentric overdrive and the locals just going about their business with an innate sense of purpose.

The film eventually brings cannibalism and incest into the story and features the characters who float in the air like giant balloons, all without backstory or explanation. So it becomes even more strange and surreal, but Dumont never loses his sense of whimsy and his affection for his characters. Even the ones munching down on fresh pieces of tourist.

, iTunes, GooglePlay and/or other services. Availability may vary by service.
Slack Bay [Blu-ray]

The Blu-ray and DVD editions from Kino Lorber feature brief interviews with actress Juliette Binoche (in English) and filmmaker Bruno Dumont (in French with subtitles).