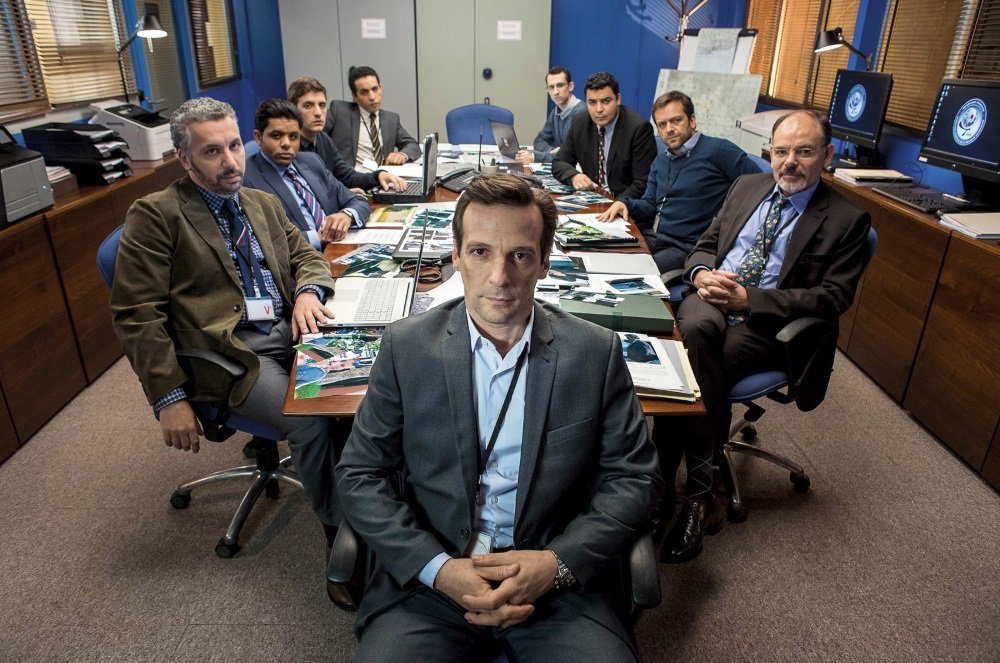 French film star Mathieu Kassovitz takes the lead in The Bureau, a French drama set in a clandestine branch of the French Secret Service that handles deep cover agents in the Middle East and Africa. He is the bureau’s star agent back from a six-year assignment in Damascus to become the right hand of the section commander (Jean-Pierre Darroussin) and take the lead when a fellow agent in Algiers is arrested and them goes missing without a trace.

His civilian name is Guillaume Debailly, his identity—his legend—for the past six years was Paul LeFebvre, and his code name in the intelligence community is Malotru. Which is his “true” identity? Perhaps even he doesn’t know, and he resists pushing at it in the bureau-mandated sessions with Dr. Balmés (Léa Drucker), a civilian psychiatrist newly brought in to the team to both assist on cases (she observes interrogations and assesses the reliability of the answers) and provide counseling for the members of the team. She suspects he’s hiding something and she’s right. Malotru’s lover from his Damascus assignment is in Paris for a conference. Against all protocols, he revives his cover identity and secretly reconnects with her, setting in motion events that threaten to expose his identity, put her life in danger, and compromise the entire bureau.

Personal and professional responsibilities collide as secrets are compounded and the added complications of the human element pushes the drama into even more unpredictable territory. Kassovitz is superb as the veteran agent whose personal actions put his professional responsibilities in danger. Guarded and cagey, he plays a dangerous game with his colleagues and his adversaries alike and keeps his motivations hidden so well that even the audience isn’t sure of the entire truth.

Meanwhile Marina (Sara Giraudeau), a young agent recruited from college (where she studied engineering), is completing her training to take a position in Iran under the cover of a seismic geologist. This season essentially takes us through her final lessons and her graduation, which in her case entails securing the position of a French expert working with the Iranian nuclear industry. It means befriending her rivals, exploiting their weaknesses, and navigating the politics of the office to the point that the Iranians think they are choosing her freely from as the most qualified of the pool of applicants.

Titled Les Bureau des Legendes in France, this is a smart and nuanced drama of international espionage and intelligence in a real-world setting. Rather than caper-like missions and breathless escapes, the show emphasizes tension and suspense and the unknown, the deliberate, slow-moving manner of gathering intelligence, and making plans with incomplete information informed balanced with suspicions, guesses, and experience with the players. We are in their position, watching how suspicions guide behavior and misinterpretations create new suspicions. Nothing is ever known for sure and every decision has consequences. When those decisions are made with incomplete information or based on incorrect conclusions, those consequences can destroy trust, careers, and lives.

, iTunes, GooglePlay, Fandango, Vudu and/or other services. Availability may vary by service.
The Bureau: Season 1 [DVD]