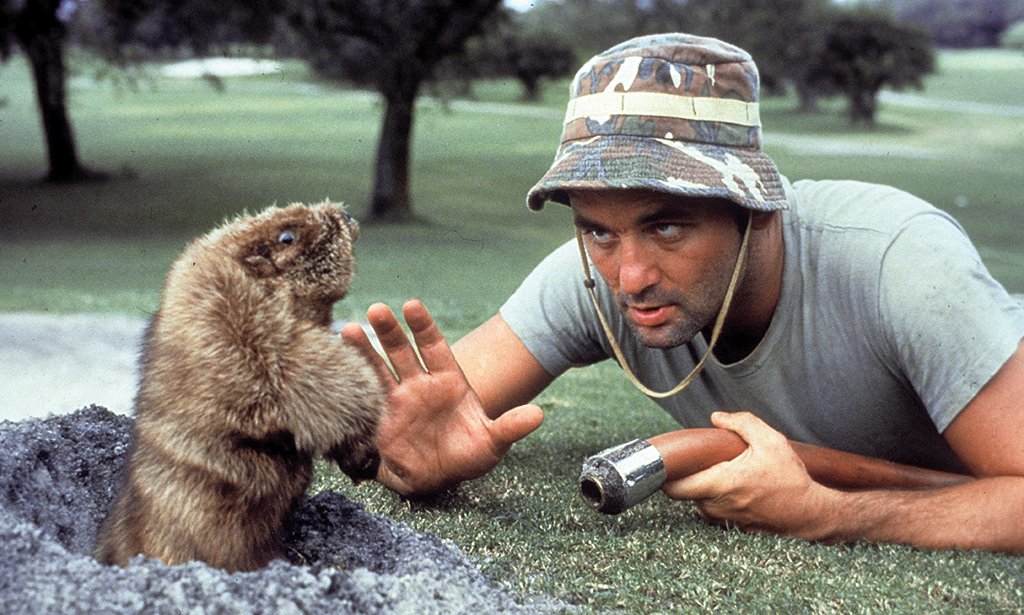 Caddyshack (1980), the definitive slobs versus snobs comedy, is ostensibly the story of a working-class golf caddy (Michael O’Keefe) at an exclusive country club trying to land a scholarship and plan his future, but his coming-of-age story becomes just another thread in the comic chaos.

Chevy Chase, fresh off Saturday Night Live, takes top billing in a defining comic turn as an eccentric Obi Wan Kenobi of the country club set (he plays what you might call Zen golf), Rodney Dangerfield (in his film debut) barrels his way through as a walking loudspeaker of bad taste and crude manners, and Ted Knight is the apoplectic judge determined to drive the boors out of his exclusive club. Yet Bill Murray steals the film in a couple of scenes as Carl, the slob of a groundskeeper who wages a one-man war against a goofing gopher with enough plastic explosives to wage a small revolution.

Essentially Animal House on the links, it’s neither as raucous nor as outrageous as that definitive college comedy but it has the same rebellious spirit and a great cast of comedy legends showing the young co-stars how it’s done. Genius? Perhaps not, but it’s a touchstone film of its generation, and it is the directorial debut of Animal House co-writer Harold Ramis, the man who went on to give us Groundhog Day.

and other services. Availability may vary by service.
Caddyshack [DVD]

Exclusive to the Blu-ray is an 80-minute “Bio” documentary “Caddyshack: The Inside Story,” which is as exhaustive and entertaining a portrait as you could want. Neither Chevy Chase nor Bill Murray are interviewed but the roster of stars, producers and crew members makes up for it. It’s worth it just to hear how the film was practically rewritten in the set, thanks to a cast of ad-libbing comic royalty and a first-time director (Harold Ramis) from an improv background going with the magic. Did you know that Bill Murray had no lines in the original script? Also includes the 1999 retrospective featurette “Caddyshack: The 19th Hole” (this one featuring Chevy Chase and a nice selection of outtakes).