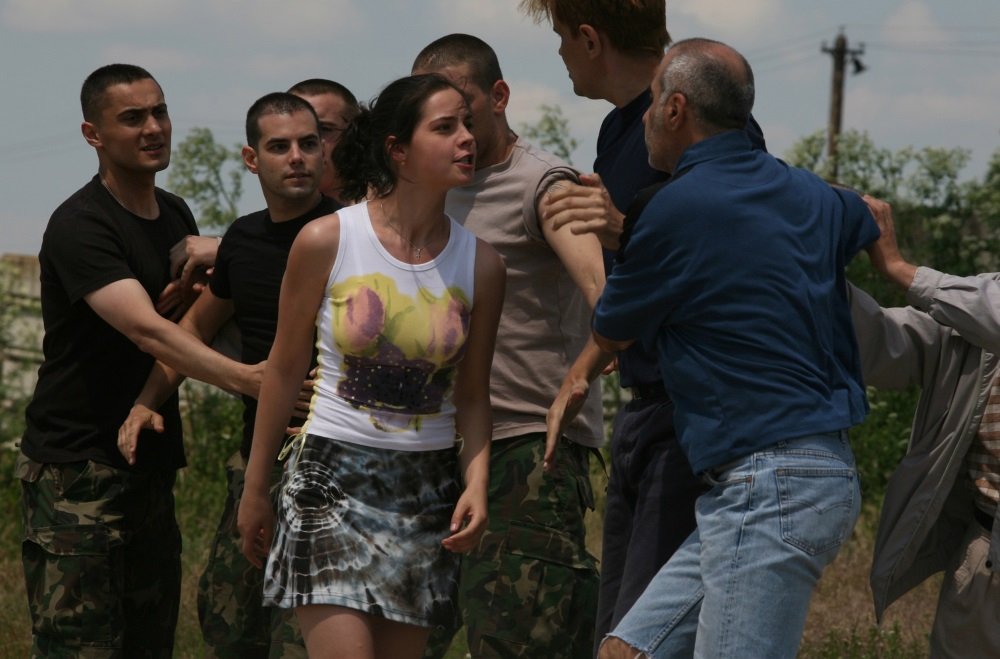 California Dreamin’ (2007) – Director Cristian Nemescu was a rising star of what has been branded the Romanian New Wave when he and his sound editor were killed in a car wreck near the end of post-production of his first feature. As a tribute to Nemescu, the producer released the film as is. The director would likely have tightened the film up some but his dryly hilarious presentation of skewed cultural identity and appropriation, his blithely scathing portrait of bureaucratic impotence and ingrained corruption in post-Ceauşescu Romania (circa 1999), and the way he appreciates his characters even as he mercilessly satirizes them fills the film with a generosity of spirit and a richness of detail. Even at a leisurely two-and-a-half hours, there enough going on to hold your attention.

“Everyone has their reasons,” was the motto of Renoir’s Rules of the Game. In Nemescu’s miserable little Romanian village, everyone has their agenda. NATO peacekeeping mission commander Captain Jones (Armand Assante in a gruff growl), whose rail convoy is held up by petty bureaucracy, wants to get his shipment of military equipment to Kosovo. Station manager Doiaru (Razvan Vasilescu), who runs his railroad position like a gangster and pillages every shipment that rolls through, blows off the government orders and sidelines them in a petty show of power and insolence (his reasons are slowly revealed in the flashbacks to World War II). His teenage daughter just wants to get out of the village and sees the arrival of the Americans as, if not her ticket out, at least a diversion for a while. And the Mayor sees the captive audience of American soldiers as an unprecedented opportunity to promote his town and its absurd effort to transform into a high-concept tourist destination (complete with a copy of the Eiffel Tower and a Texas-themed hotel).

The story is built around a real-life incident but the rest is pure fiction, part goofy village comedy, part geopolitical allegory, part social satire. The Mayor wants to promote his town out of its economic stasis while Doiaru is happy to sabotage the town’s only industry for his own gain. Local government is ineffectual, business is run like a criminal syndicate, and the town is resigned to the culture of corruption that has kept things stuck in the same mire despite the fall of Communism. And then the Americans roll through, rousing them to some kind of hope just by their presence. The image of America, as the title suggests, stands for a lot, and the fact that none of the soldiers meet expectations doesn’t deter their fantasy of American rescue. Meanwhile Assante’s Jones plays diplomat, attempting to reason with Doiaru, negotiate terms of passage, deal, bribe, everything short of threaten him. But there’s nothing logical in Doiaru’s scheme; even as he fumes over his daughter’s growing relationship with Jones’ handsome young junior officer (Jamie Elman), he refuses to pass the train through. It’s not business, it’s strictly personal, and his obstinacy gives this petty tyrant a human dimension and the film another layer of cultural collision.

Under the sardonic humor and skewed satire of ineffectual diplomatic rituals and bureaucratic musical chairs is a fascinating portrait in frustration and desperation, but Nemescu saves the most cutting satire for the Americans. The partnership between the desperate Mayor and the stymied American Captain becomes a disaster of failed communication, broken promises, and unfortunate expectations, and ultimately a vivid allegory for American foreign policy as seen by the rest of the world. Everyone has their agenda indeed and the Americans are only focused on one. What happens when they leave isn’t their worry.

Won the Prix Un Certain Regard at the 2007 Cannes Film Festival and received a limited theatrical run in the U.S.

Not rated, in English and Romanian with English subtitles.

and other services. Availability may vary by service.
California Dreamin’ [DVD]