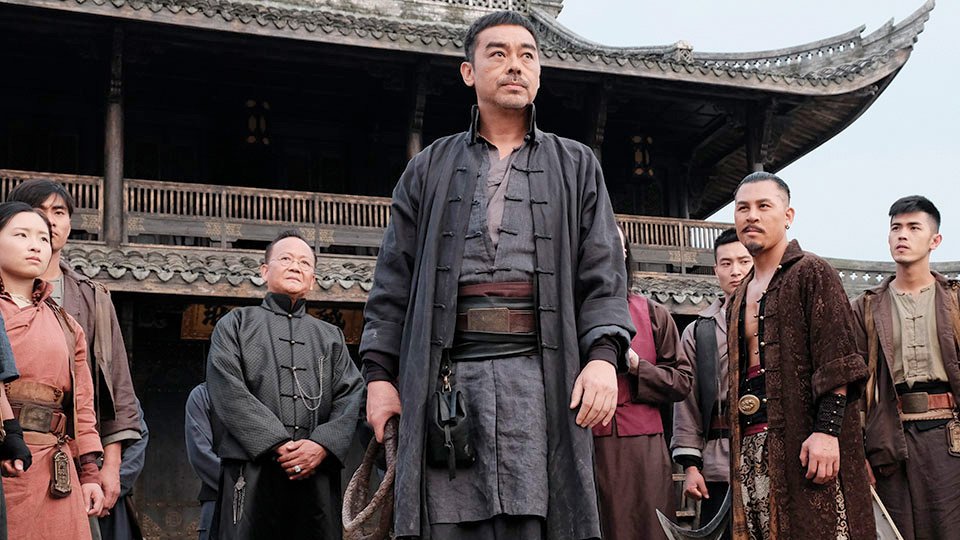 A lavish but derivative martial arts action drama, Call of Heroes (Hong Kong, 2016) stars Sean Lau (Lau Ching-wan, Life Without Principle) as the sheriff of a village left unprotected by the army as a warlord advances and Louis Koo (Drug War) as the warlord’s sadistic son, a grinning psychopath who kills with impunity until he’s arrested by the sheriff for murdering three innocents. Eddie Peng plays a wandering rogue who defends a teacher and her students as they flee from the oncoming army and reluctantly becomes their protector, which means facing his old friend (Wu Jing), who is a Colonel in the warlord’s army.

It’s a mix of classic martial arts costume piece and spaghetti western with echoes of Hong Kong classic Come Drink With Me and American western Rio Bravo. This is real old school action drama, the kind of Hong Kong movie that wears its heart on its sleeve and tends to wave it around with utterly sincere speeches about justice and duty. The hero is a paragon of virtue and morality, the villain a monster who cackles as a murders civilians, and the wandering fighter a scruffy enigma who is roused to action by the courage of the sheriff.

It’s directed by Benny Chan with lots of color and little distinction, with action direction by the great Sammo Hung, who brings his flair for creative choreography and improvised weapons to the battles and leans on old fashioned wire work to send his fighters flying through the air, running up walls, and leaping across rooftops. The set pieces are well done but it’s otherwise a collection of familiar elements and character types strung together for a story with no surprises. Which, given your appetite for this kind of old-school action, may be enough.

Not rated, in Cantonese with English subtitles

Also on Blu-ray and DVD, with a featurette, and on SVOD through Amazon Video

and other services. Availability may vary by service.
Call of Heroes [DVD]