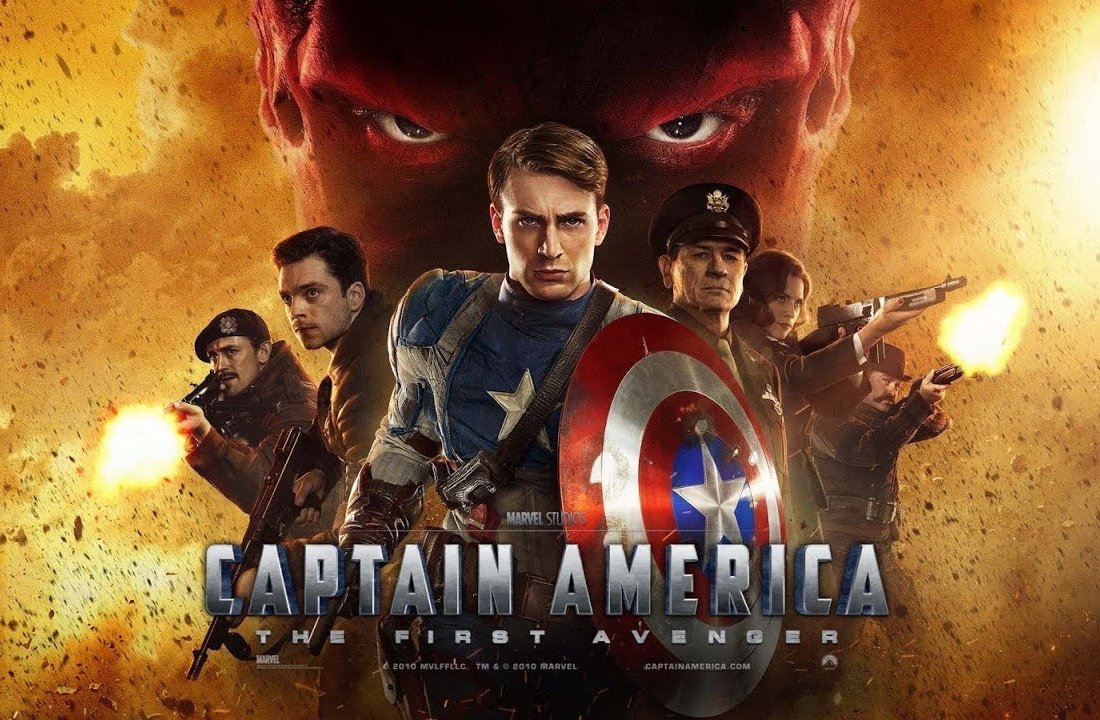 There is something very appealing in the gee-whiz earnestness and plucky patriotism of Captain America: The First Avenger (2011), a red, white and blue superhero journey wrapped up in the nostalgia of the World War II era, where American pluck and moral certainty made the battle.

As the title hints, it is something of a feature-length prologue to The Avengers, showing us exactly why the star-spangled Captain is the standard bearer of superhero ideals. Next to the psychotic obsession of Batman and the wisecracking, fun-loving spirit of Spiderman, Cap is the boy scout of the genre: brave, virtuous, earnest, so square he’s almost hip. And the film owes all due credit to Chris Evans, who brings a convincing mix of pluck, modesty and duty to the role, embodying an icon without turning it into parody. He’s the guy who steps up at every challenge, whether he’s the scrawny, sickly, 4F Brooklyn kid constantly scrapping with bullies while trying every trick to enlist or the super soldier leading a squad of howling commandoes against greater numbers to take out The Red Skull, Hitler’s madman of a freelance mini-Fuhrer.

But the film is also an old-fashioned piece of two-fisted comic-book heroism with a patina of nostalgia and World War II patriotism. It’s a big film with sturdy production values, great forties costumes and sets and technology, terrific World War II Europe settings and Tommy Lee Jones as the flinty but dedicated American Colonel who is all about the men and the practical approach to winning the war and protecting his soldiers from reckless harm.

While not the best superhero movie in the recent cycle of big-screen comic books, it’s far from the worst and at times endearing in its sense of honor, decency and responsibility. It’s more of a live-action graphic novel than a fully-realized movie, a retelling of a pulp myth or a chapter in a superhero saga rather than a stand-alone movie experience, but that in a way makes it an even more appropriate home video experience. Just file that disc alongside the other stories in the tales from the Marvel Universe.

The single-disc DVD features commentary by director Joe Johnston, director of photography Shelly Johnson and editor Jeff Ford, which is duly serious and focused on the film at hand but not particularly engaging or interesting, and two short featurettes. “Outfitting a Hero” is a 10-minute piece on designing the various incarnations of the costume, from the goofy tights of the war bond rally tour to the fighting armor of the hero in action, but “The Assembly Begins” is nothing more than an extended preview/promo for The Avengers.

The Blu-ray+DVD Combo pack features five additional featurettes — “Howling Commandos” (meet the soldiers in Cap’s squad), “Heightened Technology” (on creating the retro-inventions), “The Transformation” (how to turn a 98-pound-weakling to a super soldier on the screen), “Behind the Skull” (creating the villain) and “Captain America Origins” (a very short interview with co-creator Joe Simon) — plus deleted scenes with commentary and a bonus digital copy. But the most enjoyable bit is the live-action short “Marvel One-Shot: A Funny Thing Happened on the Way to Thor’s Hammer,” which lets SHIELD Agent Coulson (Clark Gregg) get his brief moment as an action hero.

Also available on Blu-ray 3D in a limited 3-disc disc edition that also features the above Blu-ray, DVD and digital copy editions.